Like so many other articles I’ve written about hotels with Peloton bikes, this Maryland Peloton hotels post grew out of my original Peloton hotel finder article. As more and more hotels added cycles–and even Peloton Treads–to their fitness centers and gyms, that article grew larger.

Until it was too large and long and difficult for readers to navigate. So, I started breaking out the information into smaller, location-specific articles, such as this one on hotels in Maryland with a Peloton in the hotel gym.

This list of hotels with Pelotons in Maryland is alphabetical by location. Then, if there are multiple hotels in a single location, they are listed in alphabetical location.

Two things to keep in mind when reading this blog post. One, I know that readers are looking for oceanfront hotels with Pelotons. There is one I could find–in Ocean City.

Two, if you’re looking for a Maryland hotel with a Peloton because you need to be near Washington D.C., I suggest you check out these other posts with hotels near to the U.S. capital city:

Where in Maryland are there Peloton hotels?

So, what are the towns and cities where I was able to identify hotels with Peloton bikes? Here is a quick list:

Now onto the list of Maryland hotels with Pelotons–cycles, that is. I didn’t find any with Treads.

The Annapolis Waterfront Hotel, Autograph Collection isn’t exactly an oceanfront property. However, it is on the banks of the Severn River, which connects to the Chesapeake Bay. So, definitely close to the water. In fact, some call in on the harborfront.

As far as Peloton bikes here, I’m pleased to report there are two cycles. You’ll see them right on the homepage for the hotel’s fitness page. 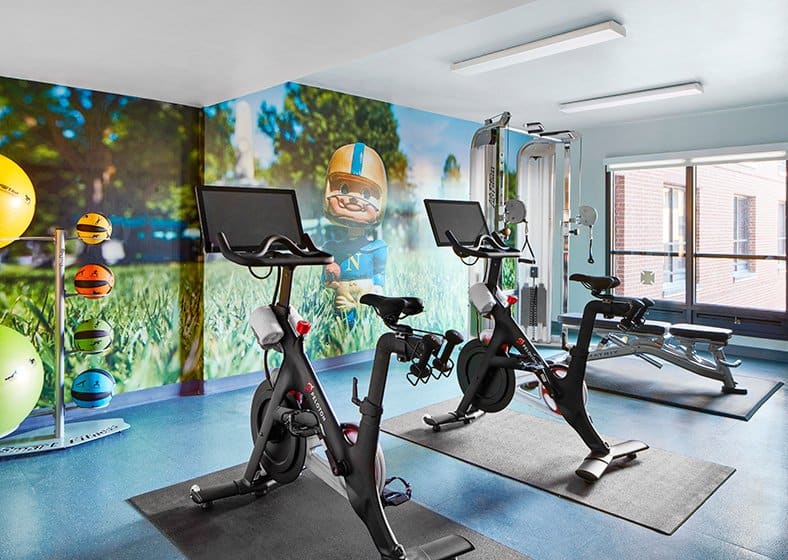 You’ll find one Peloton bike at the 1840s Carrollton Inn. This hotel is very close to Baltimore’s Inner Harbor.

A friend tipped me off that there are two Peloton bikes at the Baltimore Marriott Waterfront hotel. The only rub? She said they don’t connect to Bluetooth headphones well so pack wired ones.

Thanks to the Facebook post shown, below, I can confirm that the Four Seasons Hotel Baltimore lets you ride your Peloton bike in room, upon request. In addition, it appears that there are Peloton bikes in the fitness center, too. 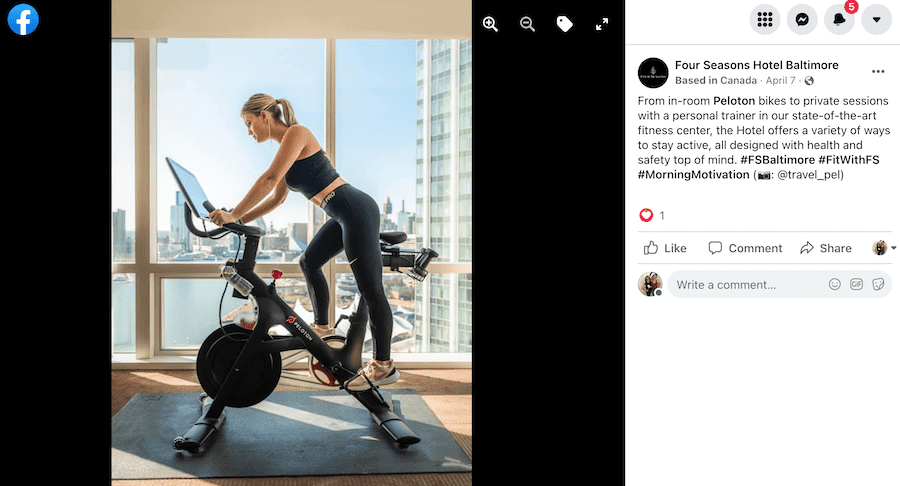 The Bethesda Marriott is located close to the NIH and Walter Reed Army Medical Center and, in fact, offers a shuttle to both locations.

As far as Peloton bikes go, the hotel recently renovated the fitness center gym and added them. This page about the hotel gym explains that there are two Peloton cycles here. Also, the gym is open from 5 a.m. to 8 p.m. daily.

The website for The Marriott Bethesda Downtown at Marriott HQ lists that there are Peloton bikes (plural) in the hotel’s fitness center.

There are two Peloton bikes in the gym at the Hyatt Regency Bethesda.

The hotel’s fitness page says it has Peloton bikes in the gym. However, I’ve been unable to confirm just how many are there.

Located within the Arundel Mills shopping center, the Live! Casino Hotel has at least one Peloton bike on the spa/fitness center level of the hotel.

After being closed for a year during the pandemic, the Gaylord National Harbor Resort and Convention Center has reopend, all shiny and new. This property is located on the shores of the Potomac River, close to Alexandria, Virginia.

Now, what about the Pelotons, you may be asking? There is one Peloton bike in the Gaylord fitness center. Again, the Gaylord National Resort is in National Harbor.

You’ll find one Peloton cycle in the 24-hour gym at the Hyatt Place National Harbor.

There is supposed to be one Peloton bike in the hotel gym at The Westin Washington National Harbor.

The Aloft Ocean City hotel has one Peloton bike in its fitness center, as shown below. 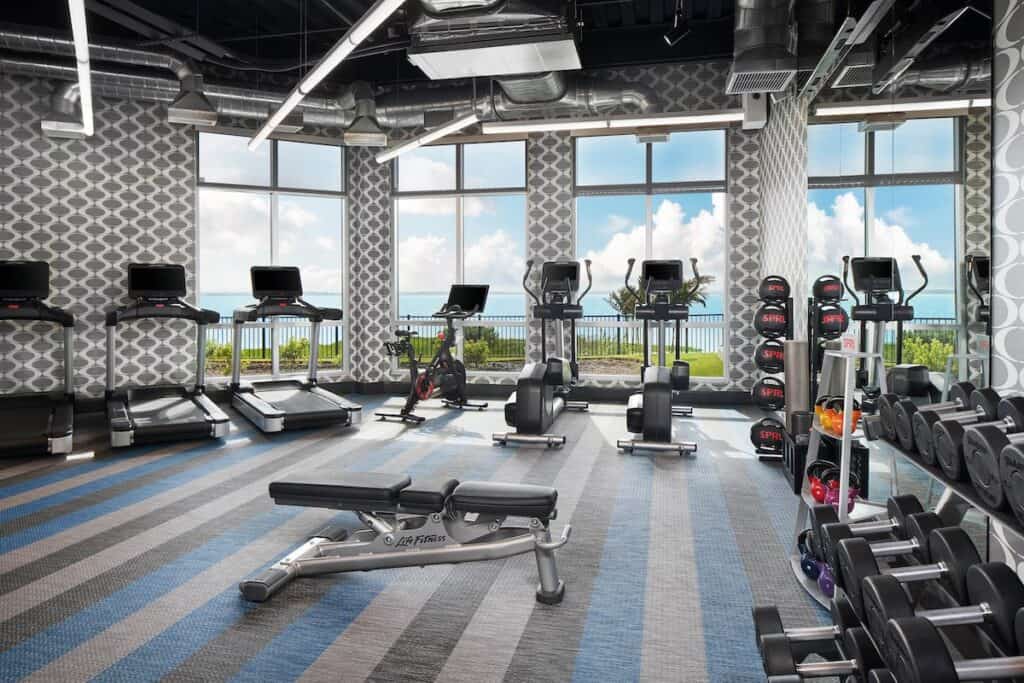 Located in Rockville, Maryland, this hotel has a super sweet deal going through 12/30/21. Book the package called “Ride and Strive” at the Bethesda North Marriott, and it includes a private Peloton bike in your room. More details here.

I would definitely describe the Inn at Perry Cabin as a waterfront property on the Eastern Shore of Maryland. As far as the Peloton here, I found information about it–it’s a single Peloton cycle–by reading up about the spa. But when I read about the fitness center only, there was no mention of the bike. That’s a wee bit confusing.

I hope you found the information you were seeking for a hotel in Maryland with a Peloton. However, if I’ve missed someplace, please let me know.

Additionally, if you’ve stayed at, work for or represent a hotel in Maryland–and you now have Pelotons in the hotel gym or in guestrooms–please post a comment and let me know. I’d love to add the property to this post in an update.