Now that I’ve used the Wisdom Panel Essential Dog DNA test on four of my pups, I figured it was high time to write a review. I mean, I have written about this topic on this blog before albeit briefly.

For example, I put something about my experience in this blog post about giving experience gifts. One of my comments: I believe that anyone who has rescued or adopted a pup and doesn’t know what breed it is would love receiving a doggie DNA test kit like the essential one from Wisdom Panel.

So, clearly I like the notion of being able to find out what breed your rescue dog is. I mean, as I said, I’ve done this with four of our dogs. But before I get deep into my review, let me backup a bit and explain just what a dog DNA test is.

Portions of this article originally appeared on Next Tribe.

What is the Wisdom Panel Essential DNA dog test?

A doggie DNA test takes the genetic material you’ve submitted from your dog and looks for common traits that it links to breeds. Don’t worry, that genetic material collection doesn’t hurt your pup. Also, it doesn’t involve having to collect anything scatological like you would a poop sample for the vet.

Whereas with a human ancestry test you spit into a tube, you can’t really get your dog to do that. So, instead you take a brush that looks like a mascara wand, and you run it along the inside of your dog’s mouth. You do this in the cheek area, not along your dog’s gums.

When I was doing the Wisdom Panel Essential kit the first time, I just followed the instructions. They were easy to understand.

Send off your dog’s DNA matter for testing

Your Wisdom Panel Essential DNA test kit comes with a prepaid envelope. This makes mailing the sample back easy and free. Well, as free as it can be since you’ve already paid for the test.

Then, about six to eight weeks later, you’ll get an email letting you know that your DNA results are ready to be read online. This will include a suggested family tree for your dog.

Even now, years after doing these DNA tests with my current dogs, Oscar and Sadie, I can still see their DNA reports online.

What kind of dog is that?

With every dog I’ve owned, two things have happened. One, I walk my dogs so much each day that I get known to be, pretty quickly, that crazy dog lady. So often people I don’t know will stop me and ask, “How many times a day do you walk your dogs?” Kind of creepy, I know. Therefore, I try to change up my routes daily. But to answer their question, it is one to three times a day, depending on the weather.

Two, because we’ve only ever had rescues or mixed breeds, people are forever stopping and asking, “What kind of dog is that?” For example, when Sadie was still a puppy, I’ll never forget the little girl who stopped and asked if Sadie’s ears were chocolate dipped.

You see, Sadie is an all black dog, but her ears have a reddish brown tinge to them. She also has the same coloring between her toes. Or at least she did when she was a puppy.

However, now that she’s eight years old, a lot of that reddish brown has turned to gray. But, sometimes on sunny days, when the light hits her fur just right, you can still see the chocolate effect, if you will. Here is a picture of both of them, below. 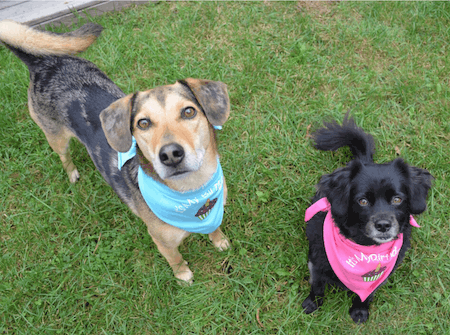 Since I’ve mentioned Sadie’s chocolate-dipped ears, let me start with her DNA results. I can tell you that her results really shocked us.

Why? Well, the rescue we’d adopted her from described her as a spaniel mix. I thought maybe Cavalier King Charles Spaniel or maybe Cocker Spaniel.

Sadie was 50% “companion” breed group (basically, dogs bred to be a companion), and 50% redbone coonhound. We had to Google “redbone coonhound,” having never seen one in real life. But they are really reddish, thus their name and the red tinge we see in Sadie’s fur. 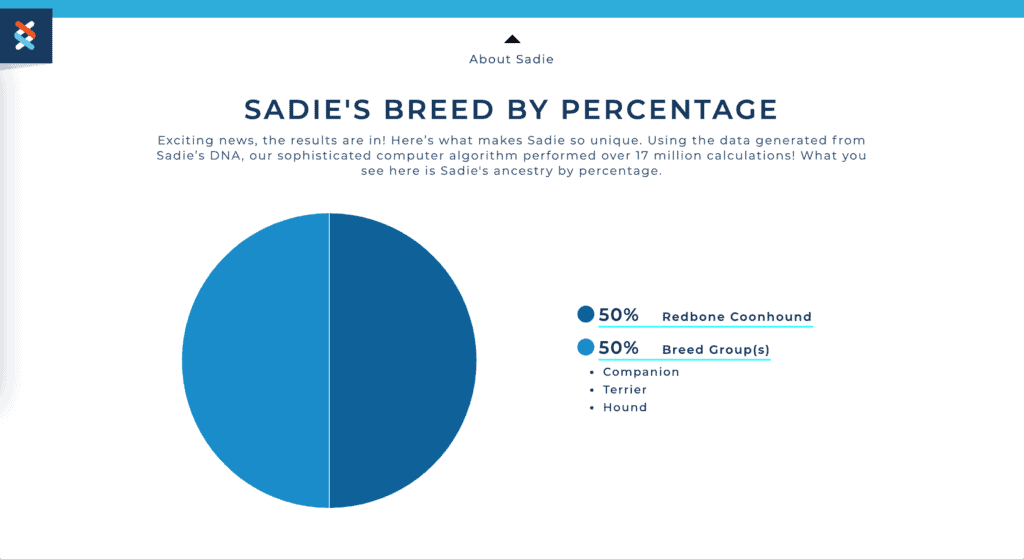 Turns out redbone coonhounds are a Southern dog. We grew up in the Northeast.

Also, redbone coonhounds have a starring role in the classic children’s novel “Where the Red Fern Grows.” I guess if I’d read this book when I was younger, this breed essentially wouldn’t have been so foreign to me.

I’ve included a picture of the family tree that Wisdom Panel sent to us with her DNA results. Essentially, she is half a pure breed–the breed being the aforementioned redbone coonhound.

But the other half of her family tree? All mixed breeds. Those groups of companion breeds include:

Here’s something interesting about the so-called Breed Groups that Wisdom Panel identified. When we first got these test results a few years ago, Pekingnese was also listed as a Companion Breed Group that Sadie could have in her ancestry. However, when I revisited her results to write this review, Pekingnese was gone.

I guess like with human DNA tests, Wisdom Panel’s DNA dog test results change over time. That is, the more samples they have to compare, the more they can refine the outcomes.

When we adopted Oscar, the rescue told us he was a Catahoula Leopard dog. Well, it was back to Google we went to figure out what the hell a Catahoula was. However, Oscar’s DNA test told us something very different than the rescue did.

To be honest with his curly tail like a question mark, I was concerned he would come back having Chow in him. I know that Chows are biters. We’d previously had a dog with fear aggression who was a biter.

However, Oscar’s personality is the polar opposite of that dog that bit people. If you raise your voice around Oscar, he will roll over and pee himself.

What breeds was Oscar

Not surprisingly, not only did Oscar’s DNA come back without Chow (whew!) but also without Catahoula. In fact, the Wisdom Panel kit results identified three breeds that essentially made up one-third of his DNA. 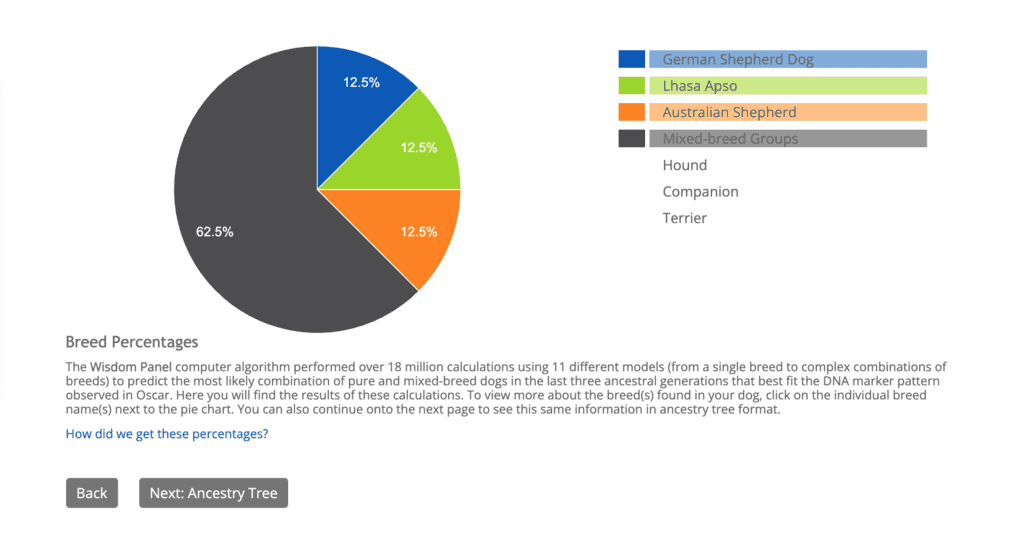 What about the 63 percent? Mixed breeds of unknown origin, says Wisdom Panel. However, the results say these unknown breeds could be in the hound, companion or terrier family.

Well, if you look at Oscar, his face looks like a beagle so hound makes sense. His trunk is a gray brindle color like an Australian Shepherd. And his deep bark? Totally German Shepherd.

His family tree shoes how the three breeds are likely divided in his background. That is, one parent’s side is a German Shepherd mixed breed. On the other is likely a dog that was a mix of the Australian Shepherd and Llasa Apso. However, I have to see–I do not see Llasa Apso in Oscar at all. 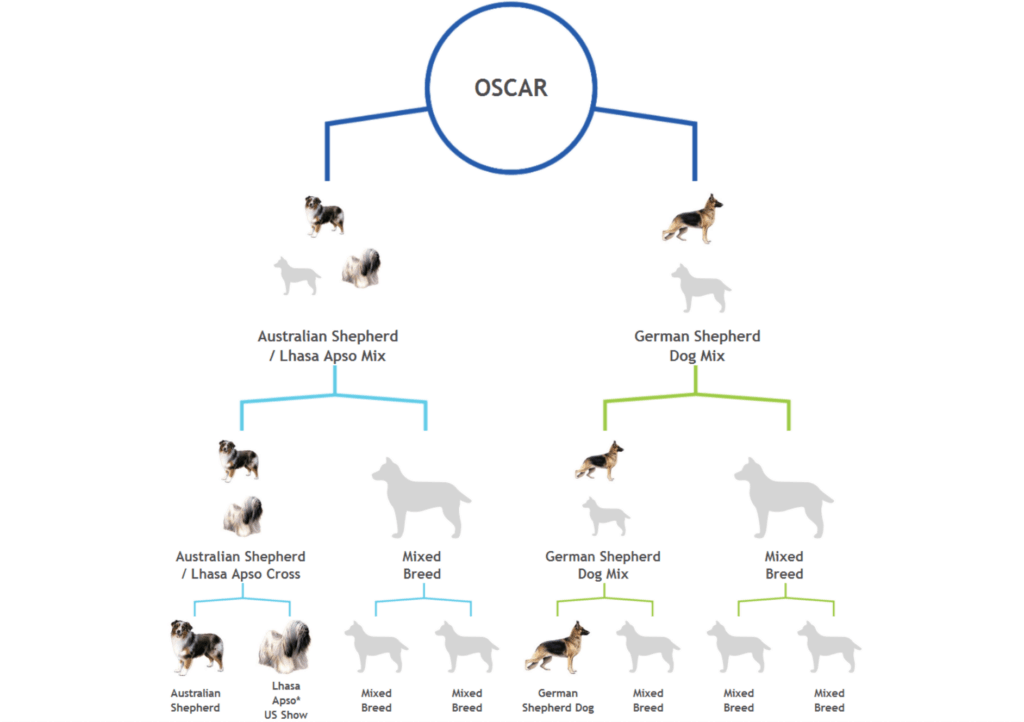 My husband jokes that spending money on a doggie DNA kit shows we have too much disposable income. Maybe it does. But, is the Wisdom Panel Essential Dog DNA kit worth the money? Does it make a great gift?

I’ll say it again–if you rescue your dogs and want to know their breed, it is totally worth it. Or, if you’re looking to give an experience gift to someone else with a rescue, again, this doggie DNA kit is worth it.

Finally, now, when I walk Sadie and Oscar around town and someone asks, “What kind of dog is that?” I can answer with a degree of certainty. 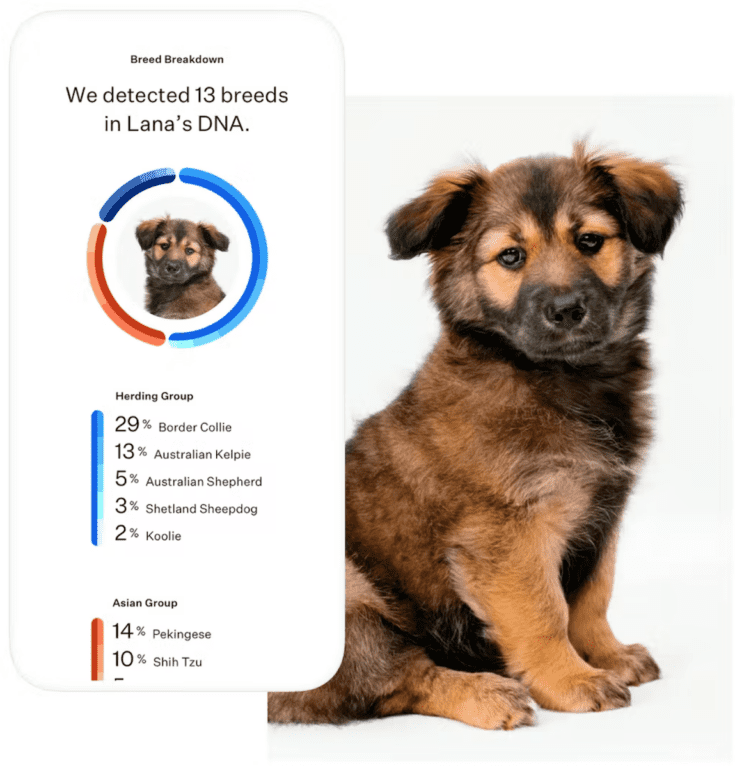 Use code PETMOM to save.