Are you one of the 29 million Americans looking for awesome dog costumes for Halloween? Yup, that’s how many of us dog lovers celebrate Halloween with our pets–29 million.

Recently, the National Retail Federation came out with a list of awesome dog costumes for Halloween. These include funny pet Halloween costumes as well as animal costumes for pets. 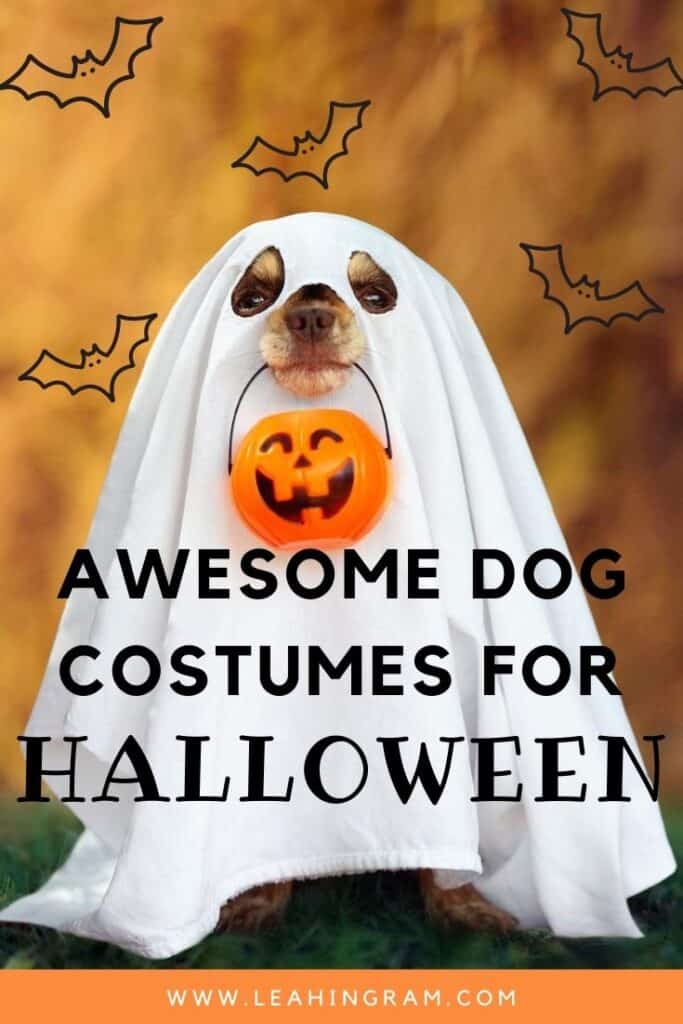 Here are the top funny and awesome dog costumes for Halloween. I’ve included images of them.

With the average pet owner expected to spend about $18 per costume, I’ve tried to find costumes that are also affordable. This will help you celebrate Halloween with your dog this year without busting your budget.

Here are some additional thoughts on how to have Halloween on the cheap.

When it comes to a pumpkin dog costume, you’ll find a number of options. One of the most popular ones traditional dog costumes is dressing up your pooch like a pumpkin. On Chewy I found an adorable pumpkin costume in sizes XS to XXL. 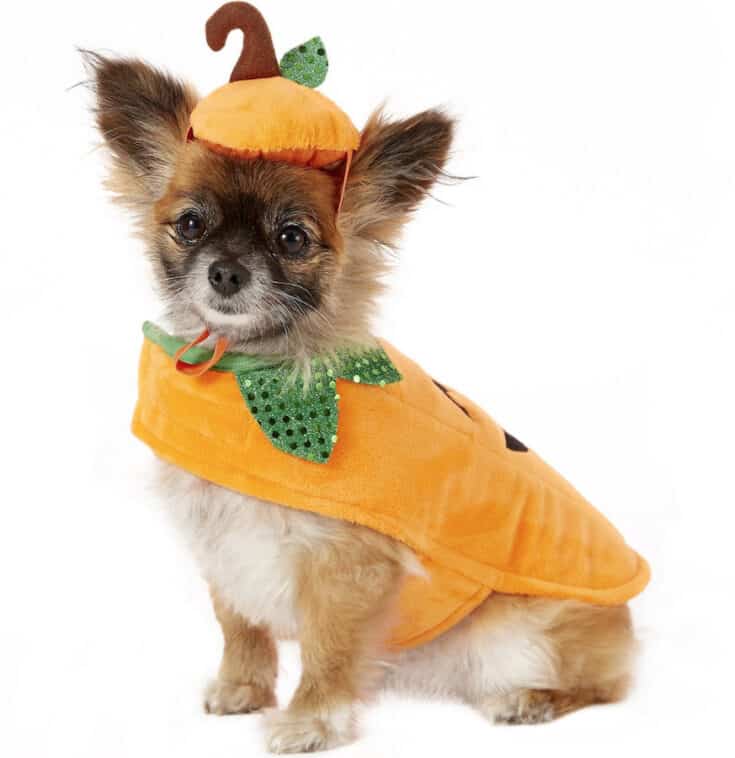 Even though this awesome pumpkin costume is shown on a small dog, it comes in sizes XS to XXL for larger dogs. 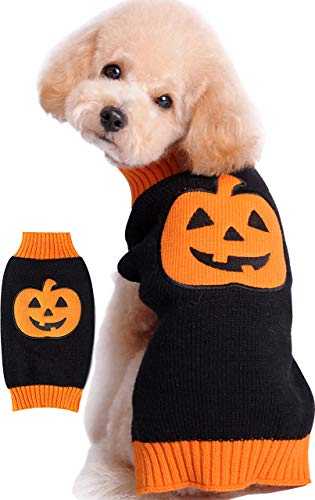 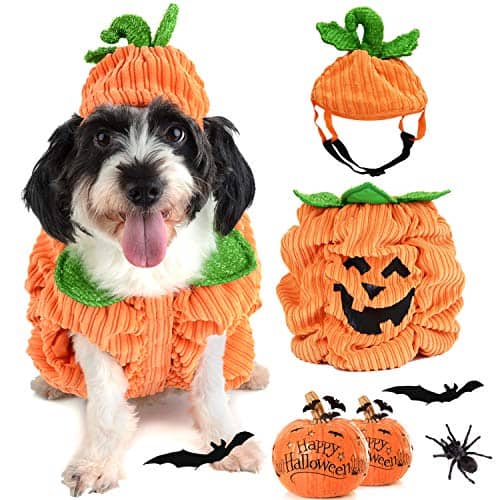 Another idea for this dog costume for Halloween is to find a pumpkin sweater that you can put on your dog as a Halloween costume. Or an orange shirt that looks like a pumpkin.

Perhaps the most awesome dog costume for Halloween is putting a dachshund or weiner dog in a hot dog Halloween costume for dogs. But you can put any breed in the popular hot dog pet costume. Some of these even come in an extra large size, good for owners of large breeds.

Finally, if you want a matching costume with your pet, I’ve included a ketchup and mustard bottle costume for humans. These would be perfect to wear if you’ve dressed your pup up as a frankfurter. 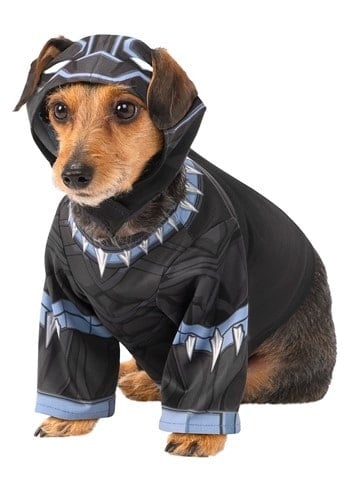 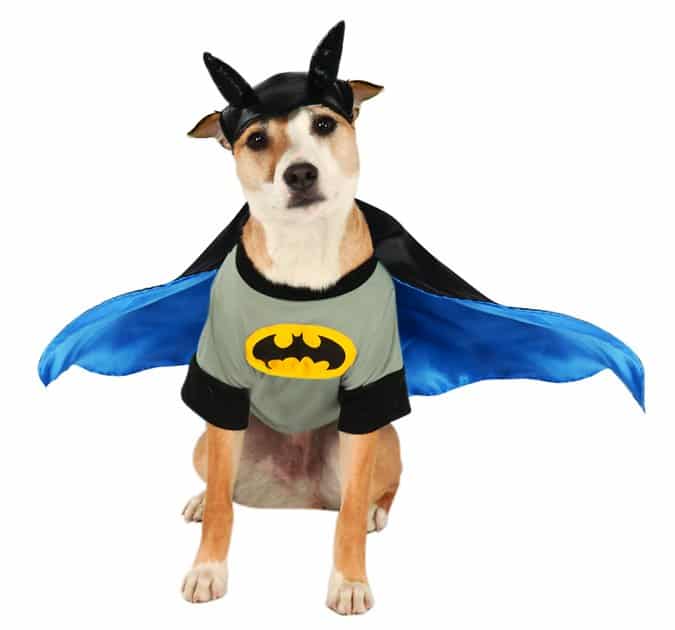 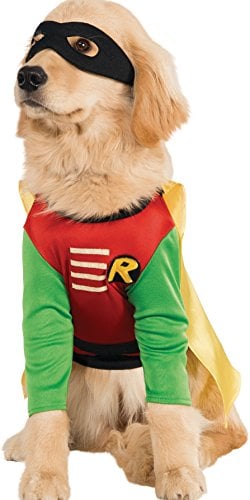 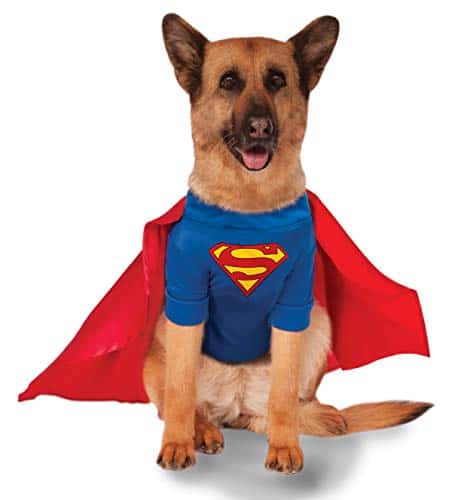 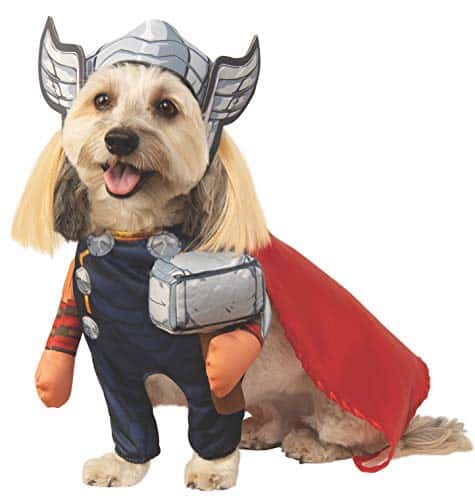 I’ve seen a wide variety of bumblebee dog costume options, including some that could easily double as pet costumes for the Pittsburgh Steelers. All have gold and black stripes. Some include a hat or integrated bumblebee wings.

One bumblebee dog costume is simply a pair of bumblee wings. That might be a great option for a dog that doesn’t like wearing costumes. 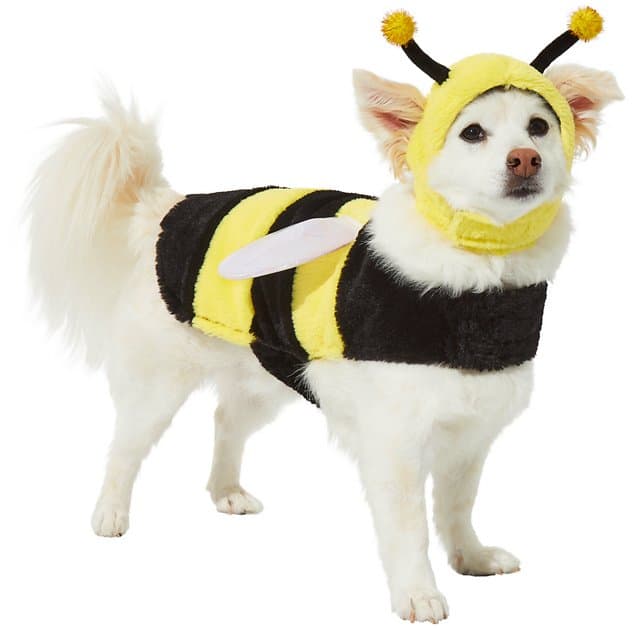 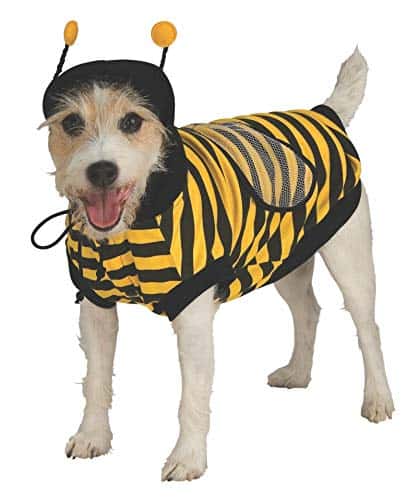 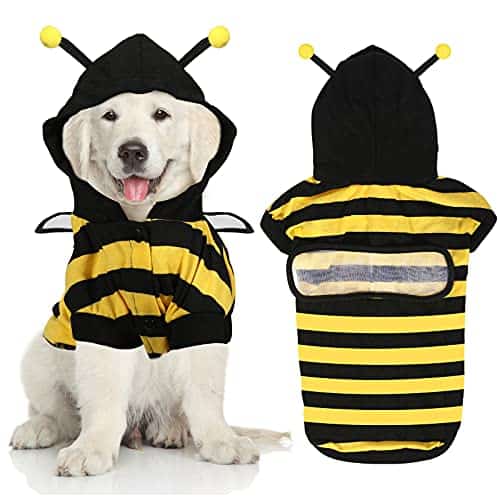 Nearly every witch costume I saw for pets includes a hat of some kind or another.

First, I don’t know about you but my dogs refuse to keep a hat on. So my advice to you would be this. If you’re determined to dress your dog up in a witch pet Halloween costume, you might want to skip the hat. That’s why one of the witch Halloween costumes I’ve included below is just a skirt, in a witchy color.

Finally, I appreciate that the Halloween Witch Cape and Hat Dog Costume below comes in six different sizes/measurements. This is a great option for larger breeds and why I’ve included it in this roundup. 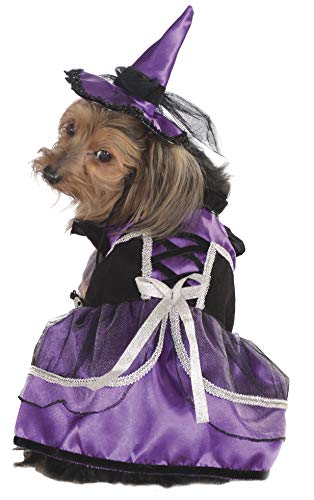 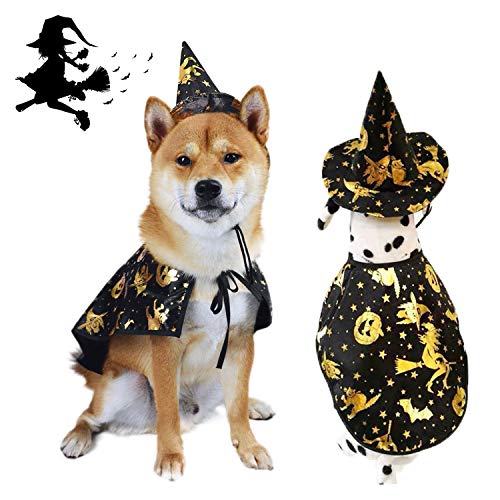 I know that Animal Planet makes a lion mane costume. These are great if you happen to have a dog the same golden color as the lion’s mane.

However, I did see lion’s manes costumed in other colors while searching for a lion pet costume. I’ve included a few here. 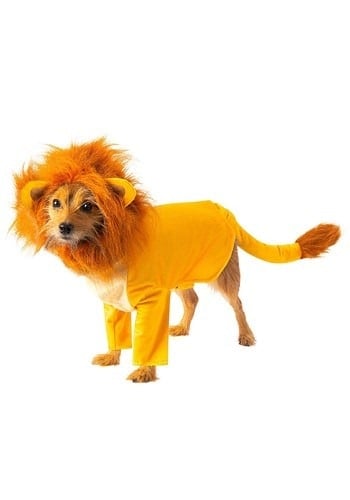 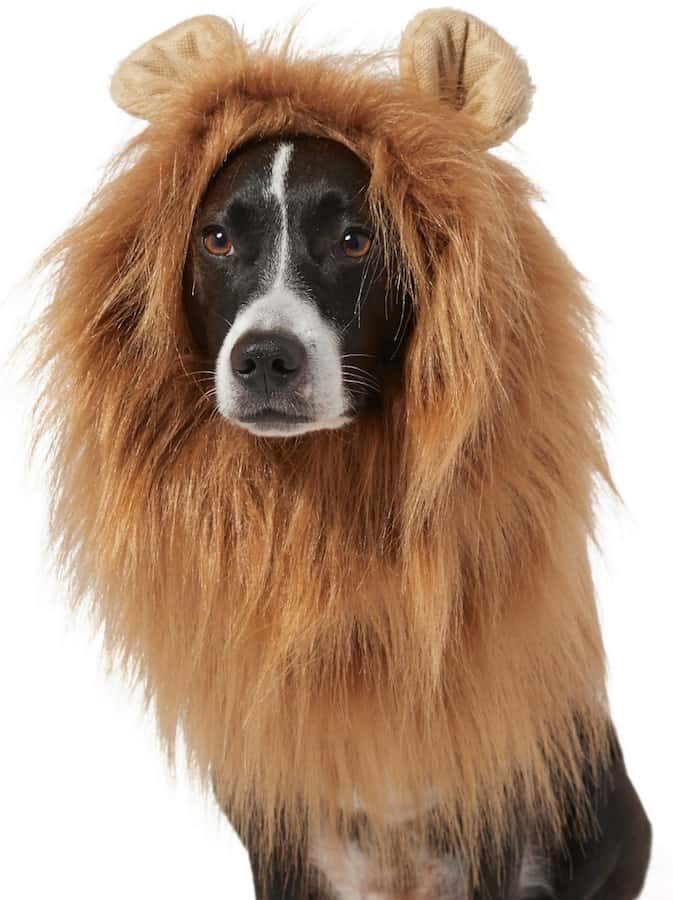 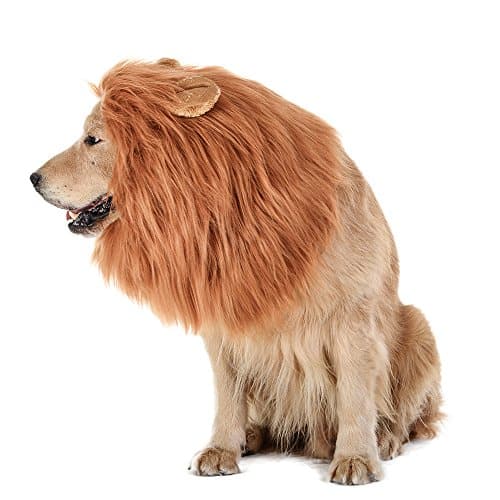 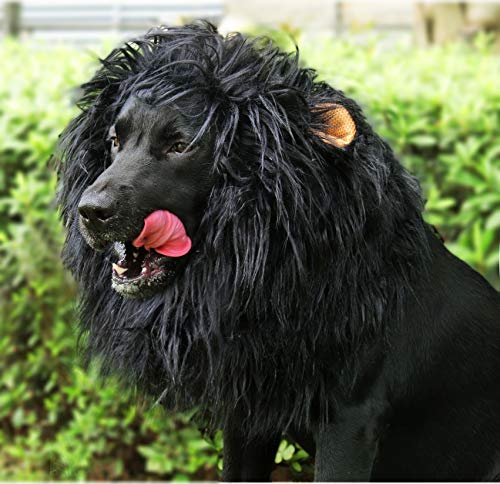 Probably never before in our current context have we come to rely on the postal servcie, UPS, FedEx and other delivery services. I mean, I know I get excited when the brown UPS delivery truck pulls into our driveway. So do my dogs.

You have seen the dogs of UPS Facebook page, right? Well, how much fun would it be to dress your pup up as a delivery person this Halloween? I found some fun costumes on a variety of online stores. 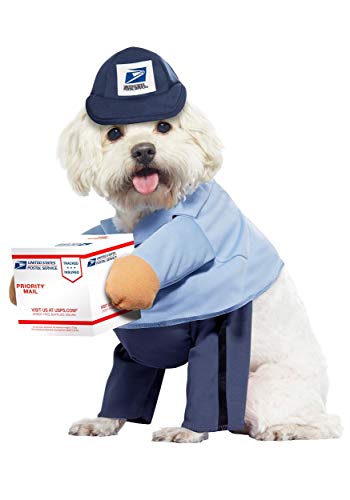 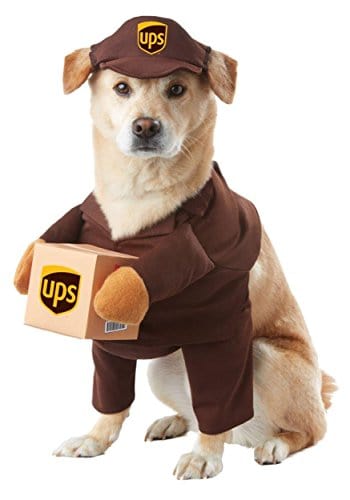 Devil Halloween costume for your pup

I had the darndest time finding a devil costume for dog. When I searched, mostly I found cat devil costumes. So, what does it say about people’s thoughts on cats? That they’re little devils?

Anyway, I was able to find two decent, traditional devil costume for dog options, including one very inexpensive devil horn headband for dogs.

Here’s another thought when thinking about a devil costume for a dog. Go with a college jersey for a school that has the devils as its mascot. Like the Blue Devils of Duke or Arizona State’s Sun Devils. 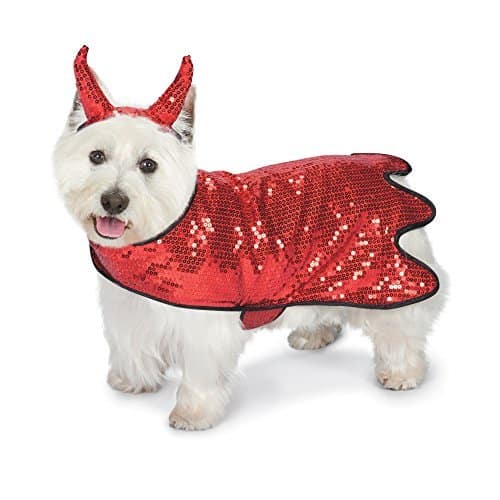 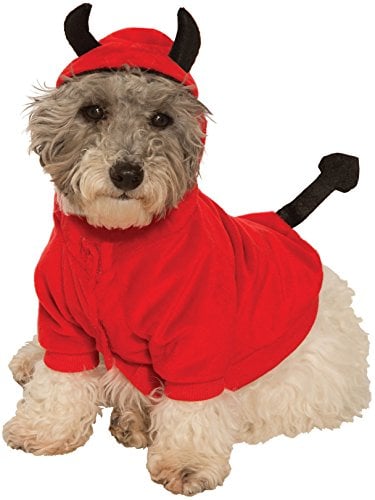 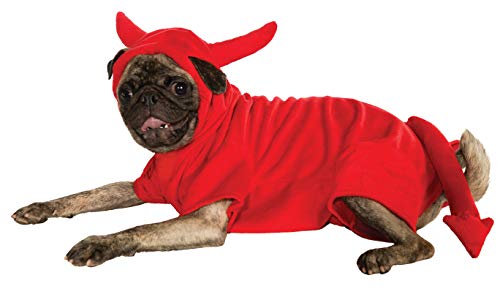 My dog Oscar was a very good boy when he let me dress him up as Spiderman one Halloween. However, I know that plenty of pet owners want to dress their pups as a legit spider, not just the superhero Spiderman. So I’ve gathered together some dog Halloween costume ideas for dressing as a spider. 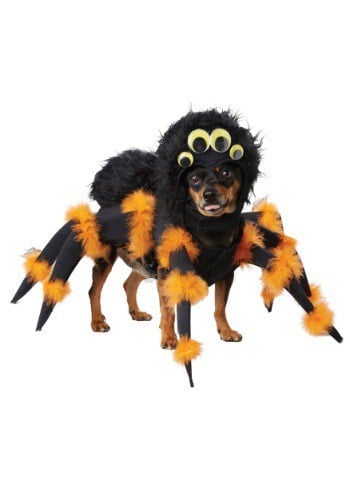 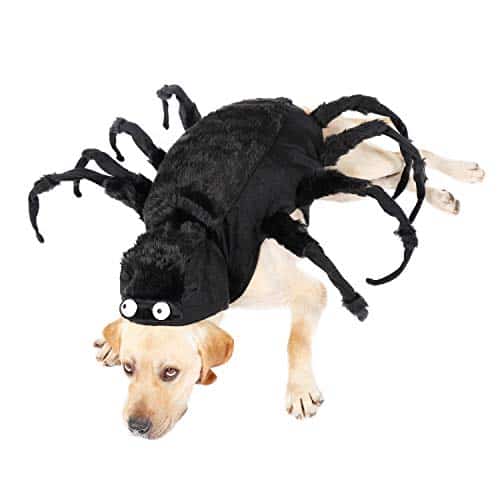 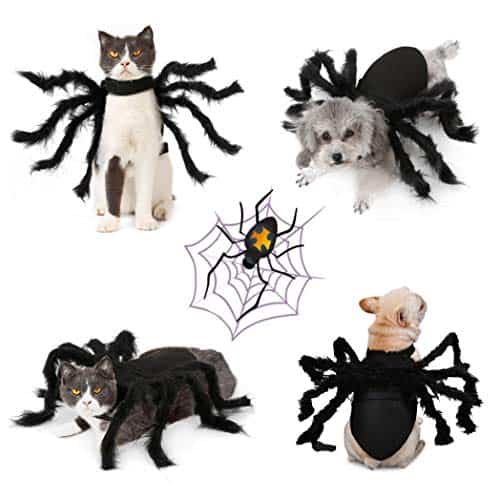 Many of the shark pet costume options I saw on Amazon involved a hat, once again. One made it look like your dog’s head was inside the shark’s mouth. That’s a little too graphic for me.

So instead I’ve include a few of the more tame shark pet costume ideas I found on Amazon. A few would even qualify as a large dog shark costume.

By the way, as a pet parent, you may be interested in my review of Chewy.com.