Is the fact that Peloton is available in Australia news to you? Well, here’s what a July 14, 2021 Peloton press release had to say about that:

“Today Peloton – the leading interactive fitness platform that pioneered connected, technology-enabled fitness – officially launches in Australia with Bike and Bike+ available for purchase, in addition to the Peloton App.”

Right now there are Peloton showrooms in two Australian cities only. They are Sydney and Melbourne.

In addition to making the bike hardware available for Aussies to buy, in 2021 Peloton introduced its first Australian-born instructor. That would be Kirra Michel. She is teaching yoga exclusively for Peloton right now.

Here is list of Ovolo hotels and long-term lodging offerings, all with a Peloton bike available in a private workout room:

I’ll include these hotels in their respective Australian and Asian country locations, below.

Likewise, Hyatt Australia took to Facebook to announce that its hotels throughout Australia now had Peloton bikes in them. Which Hyatt properties in Australia have Pelotons? Here’s a brief list:

I’ll also be including these hotels in their respective geographic locations later on in this blog post.

Not surprisingly, Peloton hotels and other lodging with Peloton has started popping up in Australia. I’ve been able to identify a handful of places you can stay and ride a Peloton bike.

Where the Peloton hotels in Australia are located

Now, onto the complete list of hotels in Australia with Peloton bikes.

A by Adina Sydney

A by Adina Sydney is a luxury, long-term apartment/hotel combination. So, it’s a mix of travelers and Australian residents doing a staycation or local getaway. I’ve spoken with the PR person for the building, and she’s confirmed that there are Peloton bikes at the A by Adina Syndey.

The Pier One Sydney Harbour, Autograph Collection is part of the Marriott family. As such I reached out to the hotel to ask about a Peloton bike here. Here is how the hotel responded:

“Yes, we have one room that comes with a Peloton bike. You can request it with our reservations team.”

So make sure you book through the hotel’s website. This is the best way to ensure you get that room with a Peloton cycle in it.

In 2022, the Sofitel Sydney Darling Harbour added three Peloton bikes to its fitness room. It’s bascially a nice little Peloton corner, which includes a poster of instructor Ben Alldis on the wall.

All three cycles have shoe cages or straps, so you don’t have to bring your Peloton cycling shoes in order to get a class in. The fitness room overlooks the waterfront.

Finally, if you reserve your room far enough in advance, you can request that the Sofitel bring one of the Peloton bikes to your guestroom. Not sure if there is an extra fee for this private use, though.

Hotels in Queensland with Peloton bikes

The Inchcolm By Ovolo

Located in the Gold Coast region and near theme parks, the Intercontinental Santuary Cove Resort does not have a gym on site. However, that doesn’t mean that guests have no option for working out, including on a Peloton cycle. Here is what the hotel told me:

“We can confirm that there is a Peleton (sic) bike available for guests to use at the Country Club Gym nearby our accommodation. We are able to provide a shuttle bus for guests to access this.”

I found a blog post from the Crowne Plaza Melbourne hotel. It announced that with Peloton bikes now available in Australia, the hotel had acquired one for its fitness center. See a screenshot of that information, below. 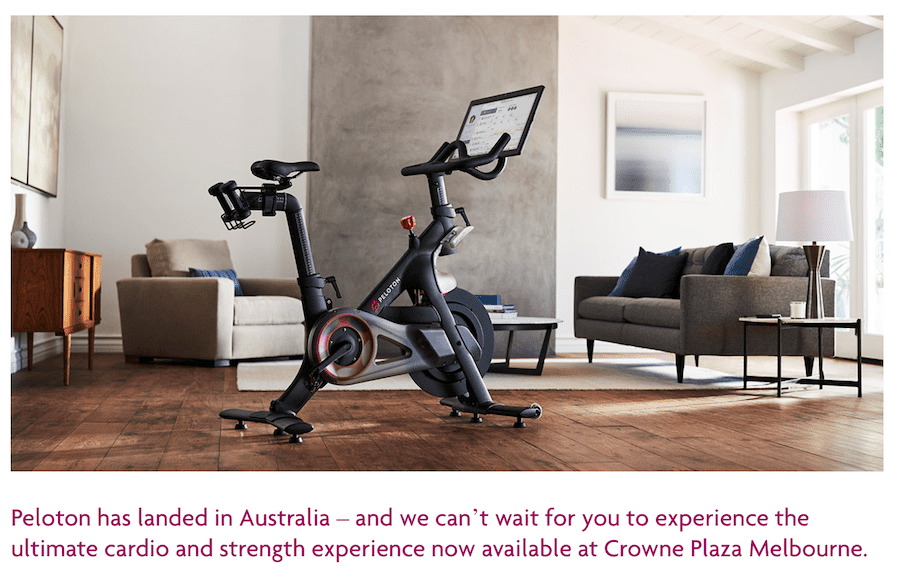 The Quincy Hotel Melbourne’s workout facilities are on the top floor. This includes the rooftop pool.

As far as where you’ll find the Peloton bike, here is what the Quincy Hotel’s staff told me:

“We do absolutely have a Peloton bike in our fitness center, up on level 29 of the hotel!”

With Asia being the largest continent on the planet, it’s no surprise that there’s a diverse list of Asian locations with Peloton hotels.

For example, both Dubai and Hong Kong have hotels with Peloton bikes. So does Indonesia.

Even so, unlike other continents, Asia doesn’t have nearly as many Peloton hotels.

However, that could change in the near future. Peloton has talked about expanding into countries as diverse as Israel and Vietnam.

For now, though, here is the list of hotels with Peloton bikes that I could find in Asia. I’ve listed them alphabetically by country.

The Aberdeen by Dash

The Sheung Wan by Ovolo

You’ll find two Peloton bikes at The H Dubai Hotel. They are in a separate studio space from the rest of the fitness center and gym, which is part of the Quantum Health Club. This Peloton studio is open daily from 6:30 a.m. to 10:00 p.m.

Also, because the bikes are in a separate fitness club, non-hotel guests can use them, too. However, you will have to buy a membership to Quantum in order to do that. On the other hand, this is good information to have. Because if you happen to be in Dubai, want to keep your Peloton streak going and are not staying at The H Dubai Hotel, then you now know you have this option for finding a Peloton cycle to ride.

Final thoughts on Peloton hotels in Australia and Asia

As Peloton continues to expand into other countries in the Asia-Pacific Rim, I expect that more hotels there will bring Peloton cycles into their gyms. Therefore, I expect that this post will be a work in progress.

So, if you happen to have stayed at, work for, or represent a hotel in Australia or Asia–and there are Pelotons there–please do reach out to me. I’d love to add the property to this post about Peloton hotels.