Until it got too long. So I started breaking out the information by location.

Now the latest location to have its own blog post about hotels with Peloton bikes is Missouri. I’ve researched this topic and discovered that most of the Peloton hotels are in these two Missouri cities:

There are also Peloton hotels in Kansas City, Kansas, including the Marriott Kansas City Overland Park. But this article focuses on Missouri exclusively.

I found a PDF brochure on the 21c Museum Hotel Kansas City that says it has Peloton bikes in the fitness center gym. So I’ve included it in this list.

However, if I learned differently–or if you’ve stayed there and know more–I’ll update this section accordingly. But, until that time, I’ll say that the 21c Museum Hotel Kansas City is a Peloton hotel.

There is one Peloton bike at the Ambassador Hotel Kansas City, Autograph Collection. FYI, this hotel is part of the Marriott family.

When wondering about the Peloton situation at the Hotel Kansas City, here’s what I was told:

And then I found the Facebook post, below. Yup, there is definitely a Peloton at the Hotel KC. 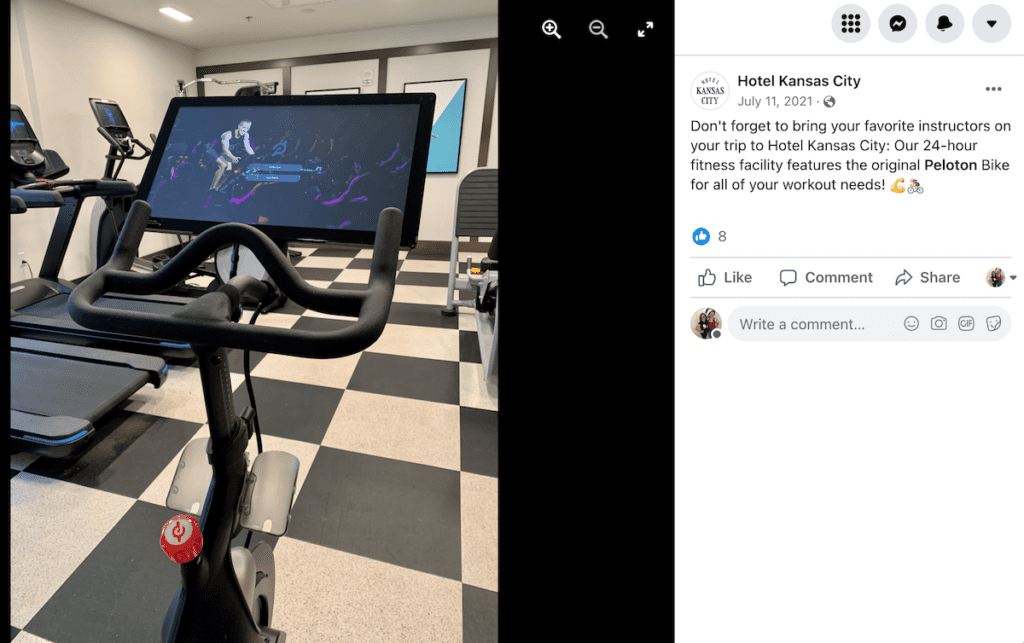 Part of the Marriott Autograph Collection, the Raphael Hotel is an upscale boutique hotel in Kansas City. Word around the Peloverse is that the hotel’s fitness center has a Peloton, even if the hotel website doesn’t say so.

I’m getting conflicting info about the state of Peloton cycles at the The Westin Kansas City Some have said they no longer has a Peloton bike in the Westin Workout Fitness Studio. Others say there are three bikes, but only two that work well. A third person told me that you can get a Westin room with a Peloton in it. So, I will check all of this out and come back with a confirmation. 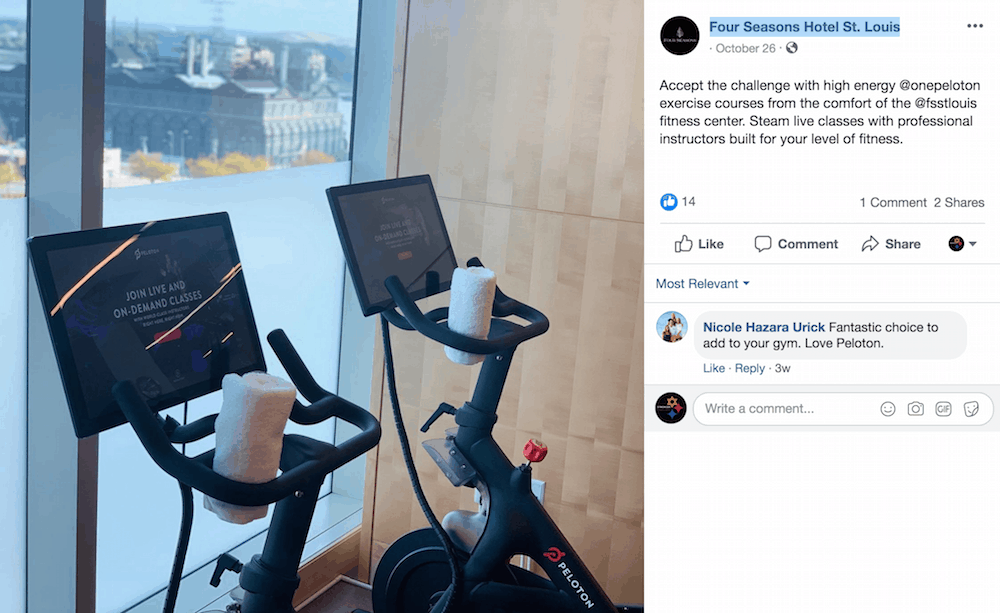 Located in the historic International Shoe Company, The Last Hotel has two Peloton bikes in its hotel gym.

A representative from Le Meridien St. Louis Clayton reached out to me about this property, which went through a multi-million dollar, full-scale transformation this past October. She told me that guests are booking the hotel for the fitness center’s views and Peloton bikes. I’m not surprised.

The state-of-the-art 17,000 square foot studio has gorgeous views of St. Louis skyline with its floor-to-ceiling windows. Plus there are four Peloton bikes. They, too, have a great view of nearby St. Louis, including the Arch. See the pics below.

And based on those photos, it looks like these bikes have shoe cages. So, you can leave your cycling shoes at home. 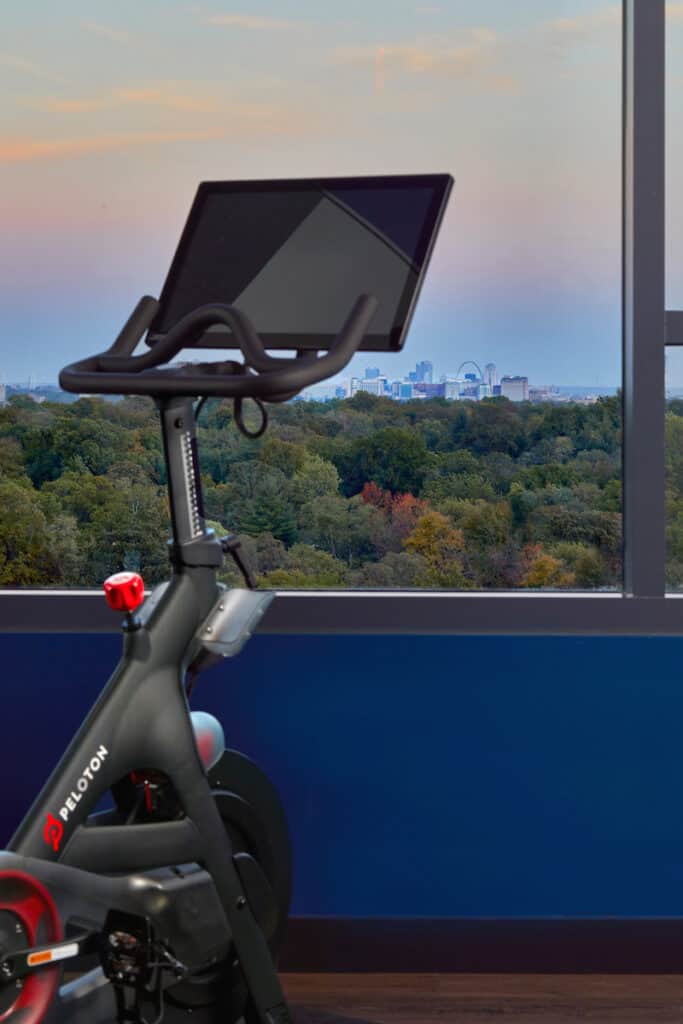 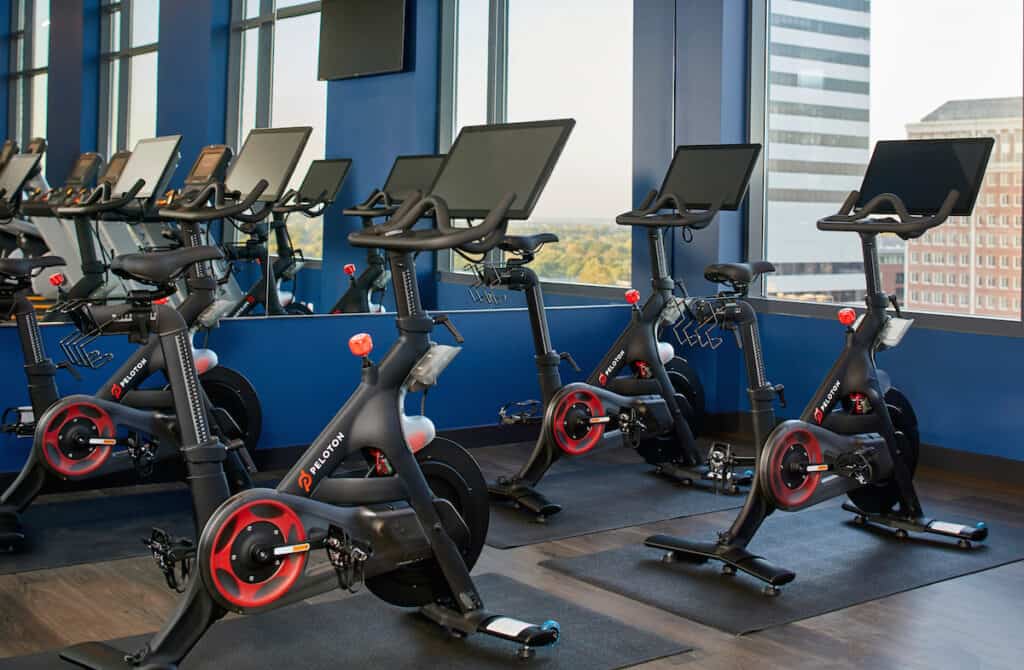 In addition to being a pet-friendly hotel, the Live by Loews Hotel St. Louis has Peloton bikes.

A Facebook friend and TripAdvisor reviews have confirmed that the St. Louis Union Station Hotel, Curio Collection by Hilton has two Peloton cycles.

These Peloton hotels articles are always a work in progress. So, if you’ve stayed at a Missouri hotel and used a Peloton bike there, please let me know. Additionally, if you work for or represent a hotel brand that has Pelotons in Missouri, I’d love to hear from you, too.