Yesterday, a consultant from Pro Energy Consultants spent the morning here, doing a home energy audit of my nearly 50-year-old house. I was under the impression that a home energy audit would be a simple walk through of my house, with the consultant noting the need for a programmable thermostat or the fact that someone needed to switch out regular light bulbs for the compact fluorescent kind. (I’ve already done both in my house.)

While that can be part of the audit, it barely scratches the surface. Consultant Paul Giorgi told me that while putting in the energy-efficient lighting is a good idea, it adds up to only 7% of your residential lighting bill. Where your savings really add up is finding ways to improve heating and cooling, which can account for about 55% of your energy bills–and a programmable thermostat is a step in the right direction but hardly the be-all, end-all fix to the problem.

When Giorgi began the audit, he asked if there were any areas of the home that were particularly hot or cold–I’m guessing to identify obvious energy leaks. Well, there definitely are–the master bedroom and my younger daughter’s bedroom. Ironically, both rooms are cold in the winter and in the summer. You would think they would be cold in the winter, if the heating is inefficient, but Giorgi found it puzzling that they were also very cold in the summer. Maybe the fact that the air conditioning system is in the attic helps keep the upstairs cooler than normal? But in the winter, those two bedrooms are farthest away from the oil boiler, which provides the hot water that gives our house baseboard heating. And if they aren’t insulated well, that would make sense as to why they never heat up.

To get a real sense of how efficient or inefficient my house was, Giorgi told me that he had to suck out all the air in the house and then see where it was leaking, using infrared, thermal-imaging cameras. He set up this Minneapolis Blower Door in my front door, which looked like a flattened, bright red hazmat suit, with a plastic window on top and a big red hole in the bottom where the actual blower went.

Once the fan was going, he started walking around the house with the camera, which looks like a handheld scanner you might find in a store. 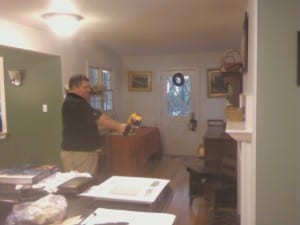 As he aimed the camera/scanner at my walls, you could see the cold air leakage right away–it showed up as blue (for cold) and looked like some kind of psychedelic icicles that had magically formed in my walls.

From the basement to the attic and all the rooms in between, Giorgi scanned the walls, windows and ceilings. And all showed cold air leakage–even the spaces in our newly renovated parts of the house. That was the bad news.

The good news? We could inexpensively fix most of the leakage problems by applying silicone caulk–around windows, moldings and anywhere else he identified leakage. Additionally, by adding foam “gasket” inserts to all light switches and plugs, we could plug most of the leaks there, too.

One trip to Home Depot or Lowe’s–and probably less than $100 spent–and much of the energy suckers in our house would be fixed. Giorgi explained that even though his scanner showed small air leaks where most of the walls meet ceilings in exterior corners, “it’s not worth paying someone to rip down the drywall and redo the insulation.”

When it comes to how he approaches the information he shares with home energy audit customers, Giorgi says that that he is all about finding the best return on the investment of your time and money. This makes sense to me since six months ago we had a consultant in to give us a price estimate on replacing our inefficient windows–we thought they were the cause of our high-energy bills and that replacing them was the solution. But at a price tag of about $20,000–plus the fact that we’d used up our energy-efficient tax credits with our 2009 return–there was no way we were doing that. Finding out that spending an afternoon caulking around the house would solve a lion’s share of our problems seems much more doable and affordable.

For a one-and-a-half to two-hour energy audit, Giorgi charges $400. However, Pro Energy Consultants provided this audit free of charge to me in hopes that I would write about it here on my blog. The fact that the company did not try to sell me anything after the audit, such as the services that would fix those leaks, left me feeling as if it were worthy enough to share on my blog.

I don’t know if you can get your power company to do a complimentary energy audit for you as one of their customers. If you can, then definitely go with the free option. But if you’d like to have an expert’s opinion on where you can improve your home’s energy efficiency–and have that information be delivered with no strings attached–I would definitely recommend contacting a company like Pro Energy Consultants.

4 thoughts on “My Home Energy Audit”