When I first wrote my article on how to find a vacation rentals with Peloton, quickly it became clear that New York State has one of the biggest collections of these homes. This includes luxury homes on the Eastern End of Long Island in the Hamptons. That article also included high-end apartments for lease in New York City and places to vacation upstate.

Anyway, as that original article grew so large, so did the section on New York vacation rentals with Pelotons. Therefore, I decided to create this article on New York State alone.

So, what towns or areas in New York are included with these VRBO rentals? Here’s a list.

Resource for these vacation rentals in New York State

Where did I get the information about these New York vacation rentals? I did a deep dive on VRBO and Homes and Villas by Marriott.

By the way, if you have a home with a Peloton that you’d like to start renting, you can sign up with VRBO. Here is a link to sign up your home to be listed on VRBO as a vacation rental.

Below is the list of New York vacation rentals with Peloton. They are listed in alphabetical order by town or area in New York.

Most of the houses included have the original Peloton bike. I could determine that one rental has the Bike Plus. In addition, one home as a Peloton Tread.

The Homes and Villas by Marriott listing for this vacation rental cuts right to the chase:

Here is how the Homes and Villas by Marriott listing describes this home and where this vacation rental is located: “Bohemian-style home with grand screened-in porch, several seating areas, open-floor plan, located in the heart of East Hampton’s peaceful Bucolic Springs.”

Based on the pictures shown, below, it seems that the Peloton is located in a basement workout room. Also, the listing says the home is in Amagansett, but also East Hampton. So, I guess you’ll have to figure that out once you reserve it. 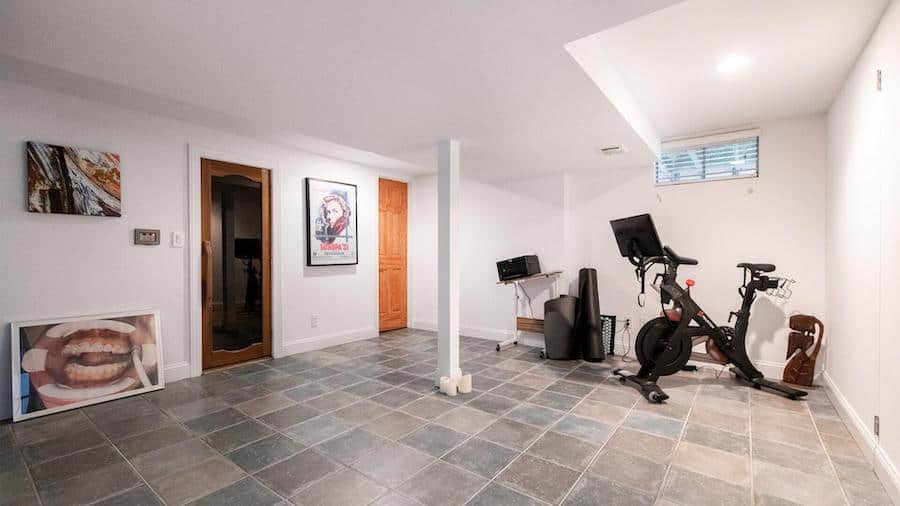 East Hampton is on the Eastern end of Long Island. This six-bedroom, three-bath home is listed on VRBO. The Peloton sits in the living room. 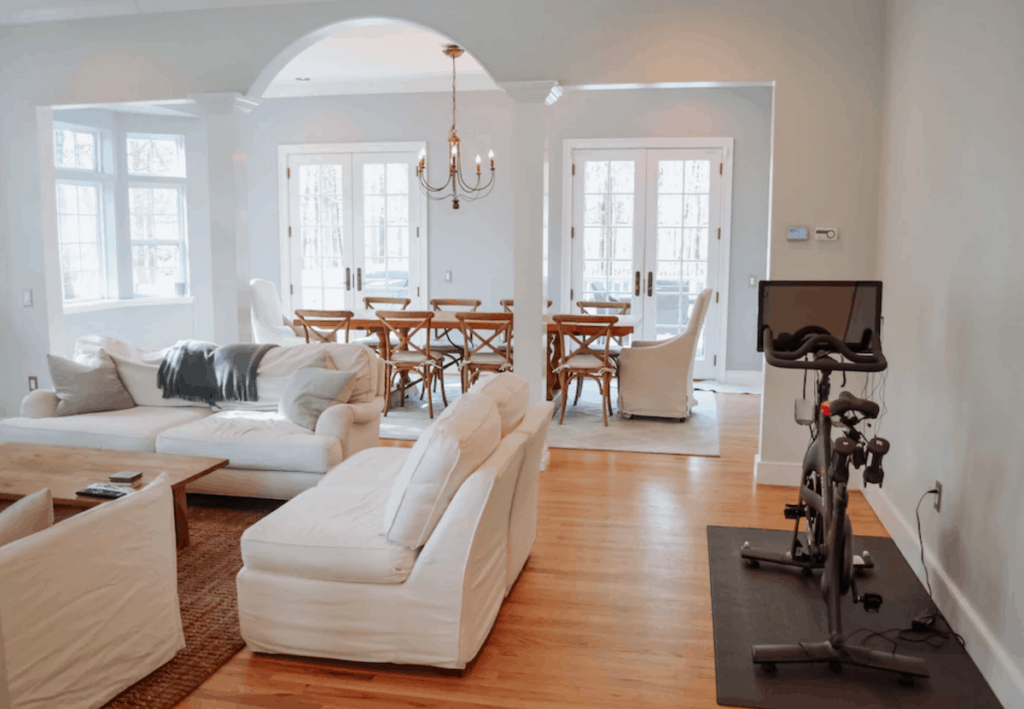 According to the pictures on this vacation rental’s VRBO page, you’ll find the Peloton in a finished basement, next to the children’s playroom. The home itself has six bedrooms and five baths, and is located on a gated lane. 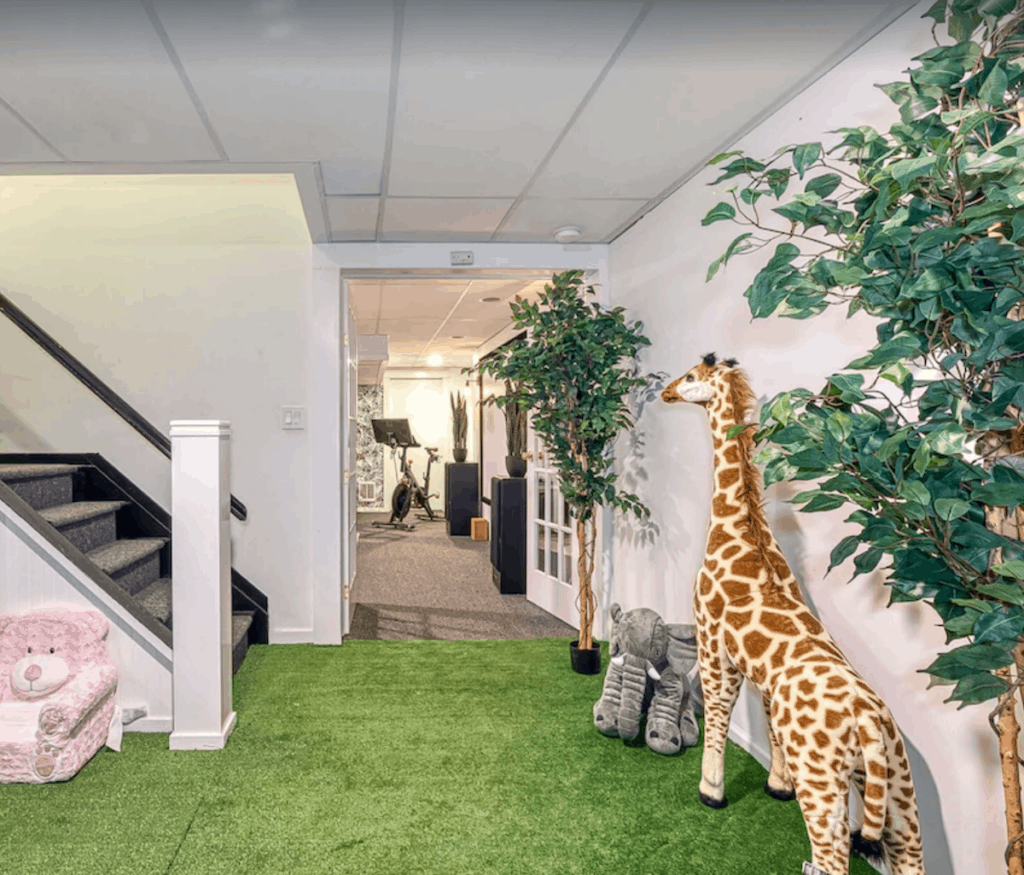 The VRBO listing for this East Hampton home calls it a bright and airy beach house. It has floor to ceiling windows in the living area, and four bedrooms and two bathrooms.

There is an in-ground pool for us in season, and a children’s playset in the yard. The VRBO ad mentions a Peloton bike, but doens’t include any infomration about where in the house it is. There aren’t pictures of it either.

When renting this East Hampton house, for some reason the only time that you can access the home’s Bike Plus is between Memorial Day and Labor Day. And you have to request it up front. Wonder where the Peloton goes for the rest of the year?

Also, the VRBO listing pictures show an original Peloton bike, not the Bike Plus. So, either the photography is out of date or the person who wrote the listing doesn’t understand the difference between the two cycle models. 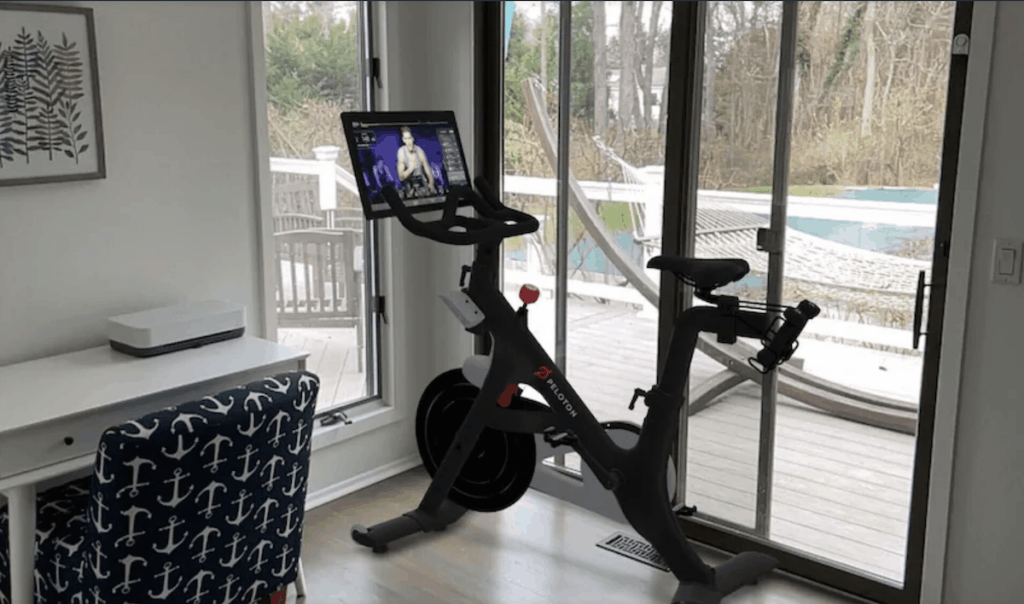 If you’re interested in staying in this East Hampton home with a Peloton bike during summer, the VRBO listing notes the following: In June, the minimum stay is one to two weeks. For July and August, you must rent this house for the entire month.

There are no pictures of the cycle in the listing. So, I can’t tell you where it is in the home. Be sure to ask before booking.

The VRBO listing for this East Hampton home says they’ve just added “a brand new Peloton workout bike looking out to the beautiful backyard and tennis court.” I’ve included a picture of it, below.

The home itself is on 2.5 acres and has five bedrooms and four baths. Pets under 25 pounds are welcome. You can walk to the Long Island beaches from this three-bedroom, two-bath home in Hampton Bays. The VRBO listing shows the Peloton bike right under the air conditioner–great for staying cool–in the dining area. 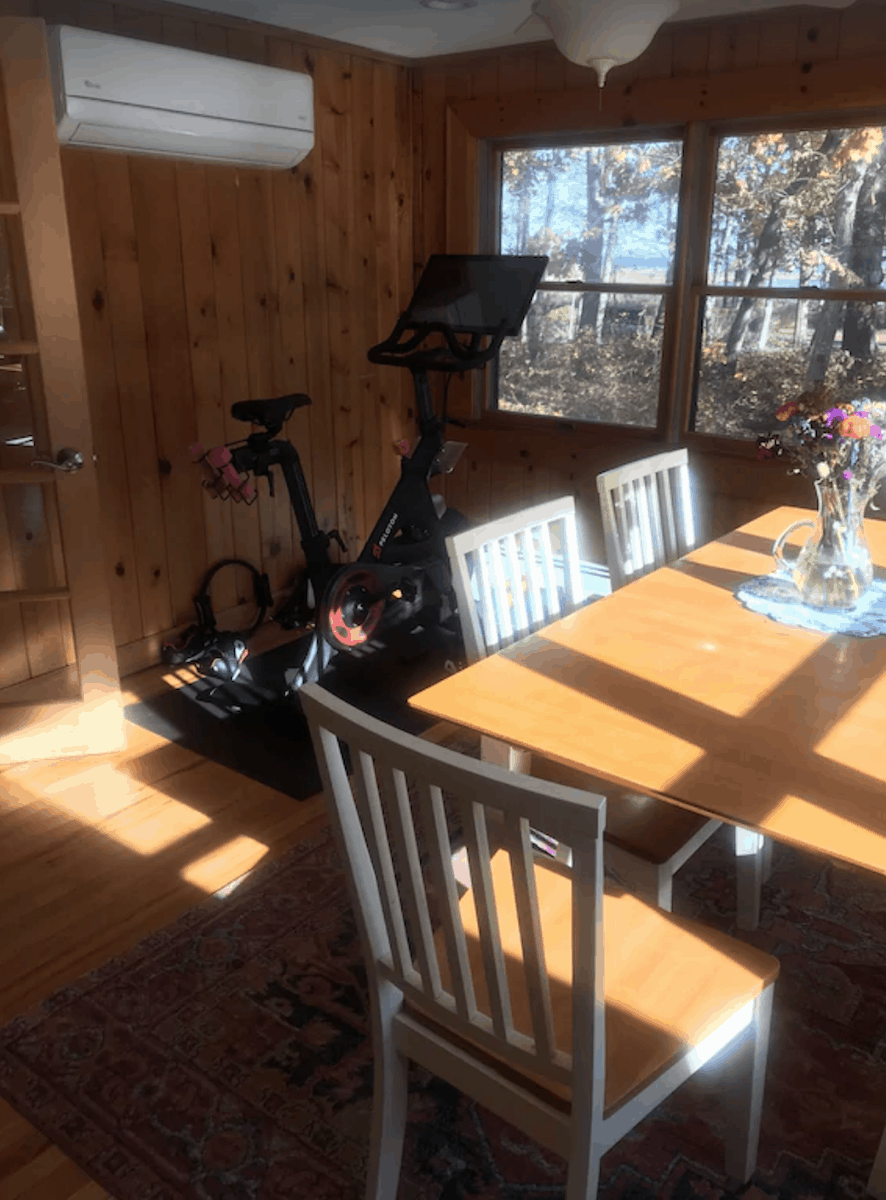 The set up of the Peloton bike in this VRBO vacation rental is breathtaking. The Peloton room sits in a bright, airy home office, overlooking a lovely deck. This home, on the Eastern End of Long Island, has six bedroom and seven baths. 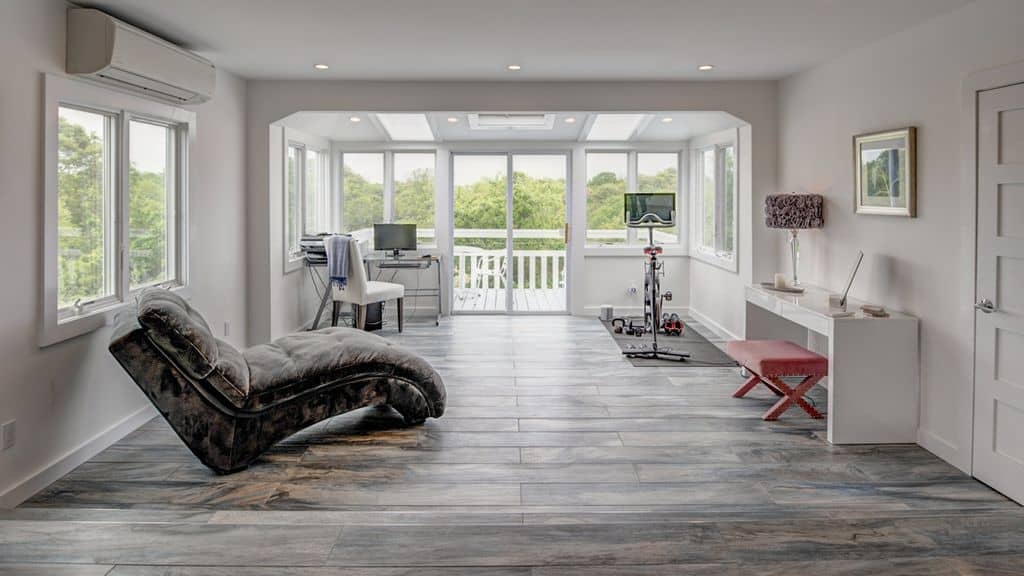 A seven-bedroom, five-bath vacation rental, this Sag Harbor home has many different exercise options. According to its VRBO listing, it includes a Peloton, elliptical, light free weights and WiFi enabled TV. This waterfront house also has a pool. Unfortunately, the VRBO listing does not include any pictures of the home gym.

The VRBO listing for this Sag Harbor home includes a recently added Peloton Bike, picture shown, below. The house itself is situated in a secluded, wooded area as part of a natural preserve. It has lots of windows and natural light. There are four bedrooms and four baths, and it is walkable to Sag Harbor Village. 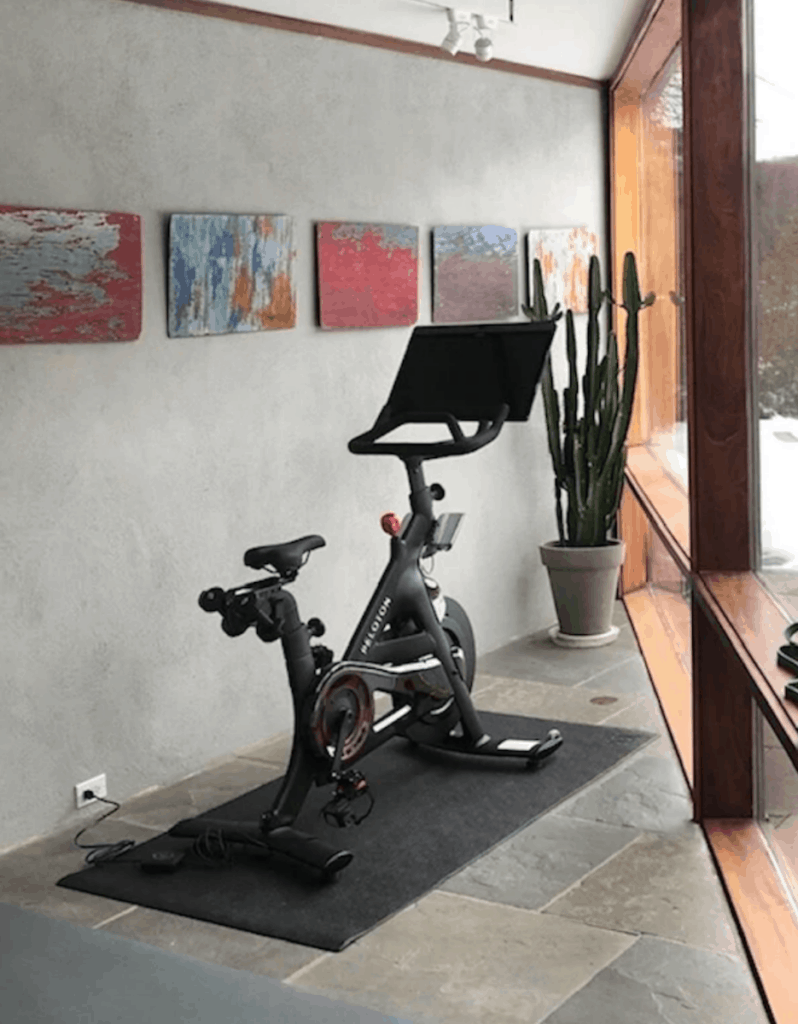 Listed on Homes and Villas by Marriott as a Sag Harbor Sanctuary, but it’s actually on Shelter Island. Either way, it is easy to see why it is called that. The house overlooks the bay in Sag Harbor.

Plus, with five bedrooms and four baths–a  heated pool, back patio with grill, fire pit, two kayaks, outdoor shower and a Peloton, of course–this is the perfect place to escape on Eastern Long Island. Bike shown, below. 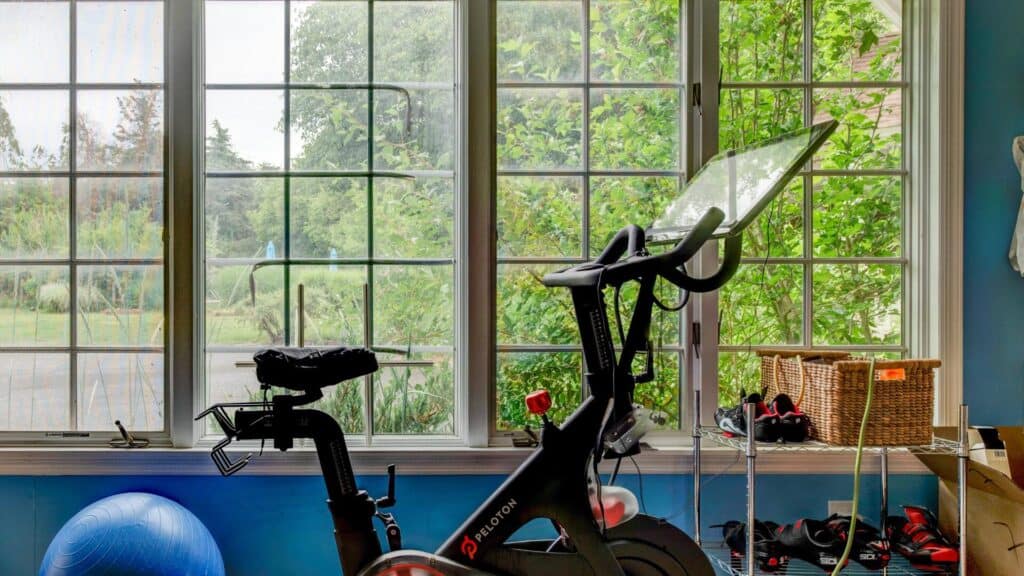 How does a vacation rental in the Hamptons with TWO Peloton bikes sound? Well, that’s what the VRBO listing for this seven bedroom, five bath home says it has–two Pelotons.

The first Peloton is in the home gym. The second Peloton cycle is in the master bedroom. Based on the pictures in the VRBO ad, both bikes are original bikes, not Bike Plus models. I’ve cropped pictures of both, below. 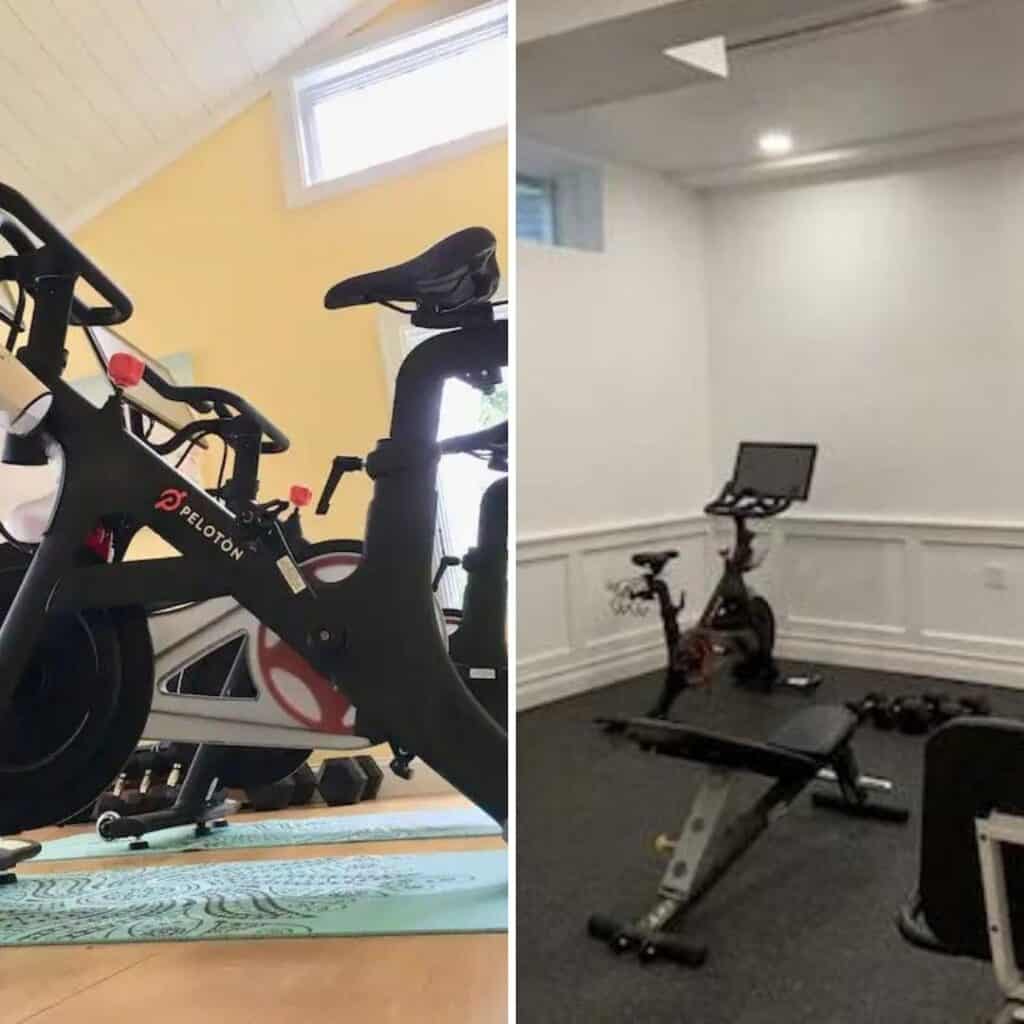 This is a six-bedrom, six-bath home in the Shinnecock Hills area of Southampton. It’s a waterfront property on the Shinnecock Bay. Here’s how the VRBO listing describes the home’s Peloton room (shown, below):

“The basement offers a gym with a Peloton spin bike, weight machine, and yoga equipment.” 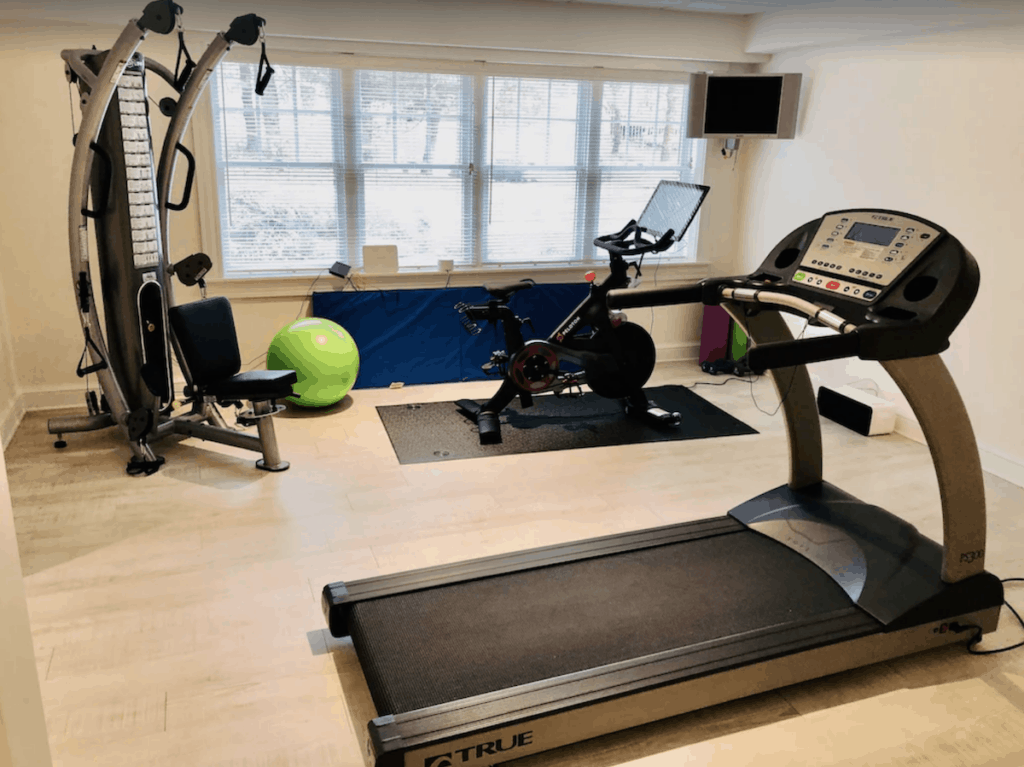 This VRBO vacation rental is advertising the recent addition of a Peloton Bike + Plus to its home gym. Here is howthat part of the VRBO listing reads:

Brand New Peloton Bike+ in Pool House with toe pedal cages so no need to bring your own bike shoes, also with swivel screen so you can also take yoga/pilates/strength classes as a group.

The home itselfhas six bedrooms and three baths, and can sleep 15. Its pool is open from Memorial Day weekend through the end of September. Bike Plus is shown below. 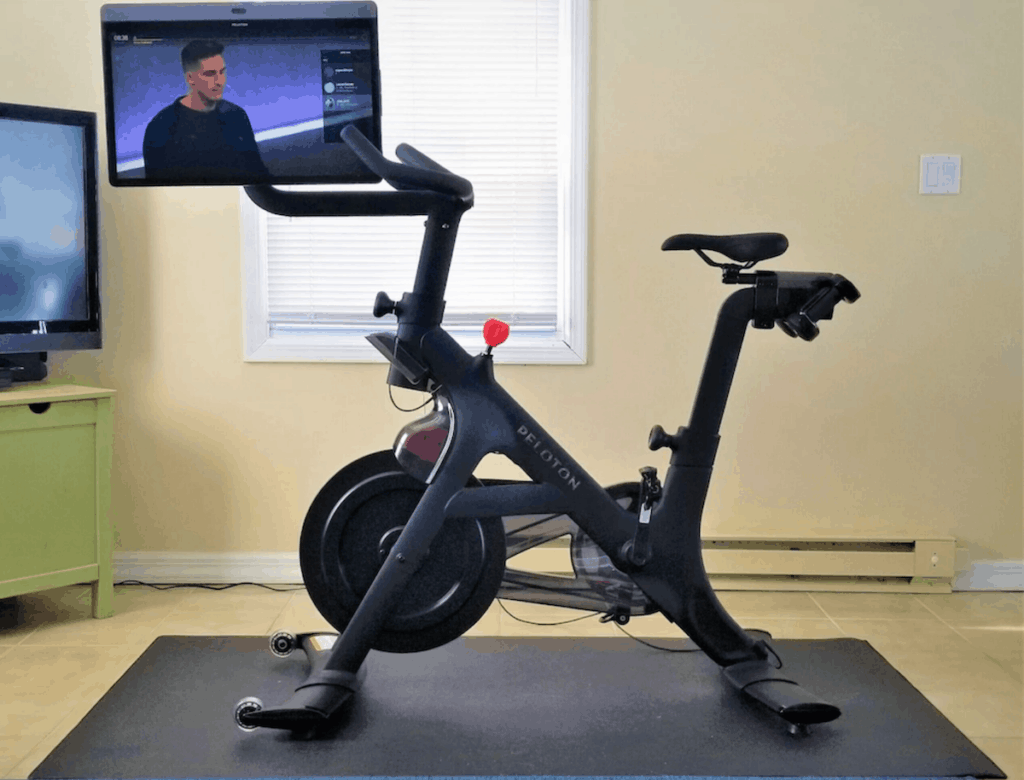 One of the first pictures you see on this vacation rental’s VRBO listing is the Peloton bike in the living room. It sits facing the bay behind this three-bedroom, three-bath home. 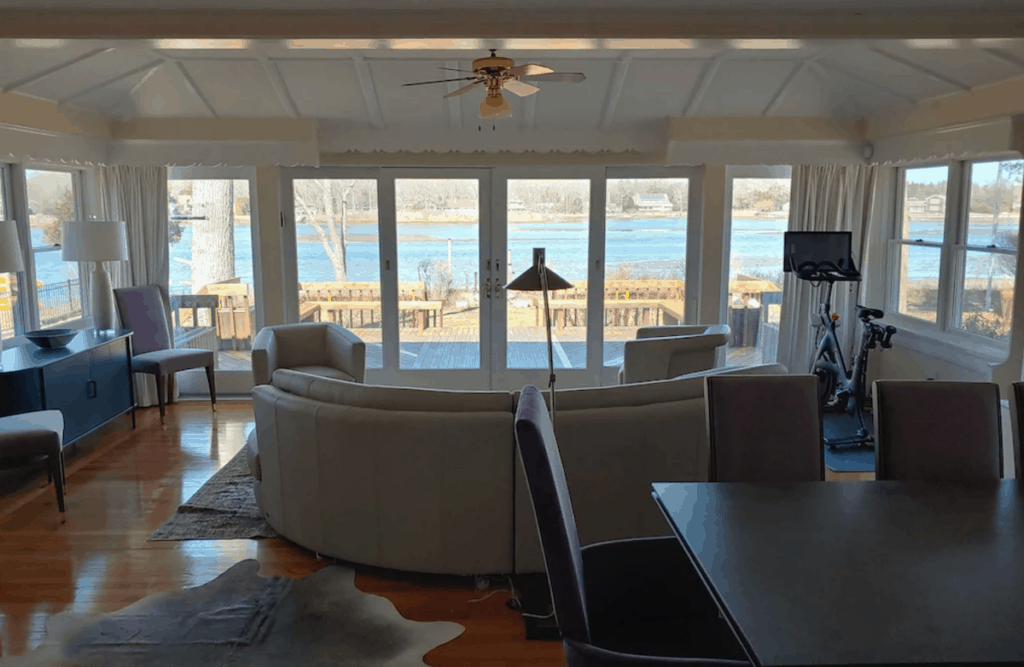 The VRBO listing for this three-bedroom, three-bath home near Westhampton states that it has a Peloton Tread and a Peloton Bike. However, since there are no pictures to confirm this information, please doublecheck with the owner before renting.

Peloton instructor Cody Rigsby lives in Williamsburg, a hip, Brooklyn neighborhood. And now you can stay there, too, on vacation.

According to the VRBO listing, this is a sun-filled, chic Williamsburg loft, complete with a Peloton bike. It has one bathroom and one bedroom, and can sleep three. Also, it has a full kitchen, a true luxury in New York City.

It must be super popular, since it’s the only VRBO with a Peloton I know of in Brooklyn. And, as of this writing, it’s booked six months out. So, plan ahead if you want to stay here during an NYC trip.

If you’re looking for a Peloton vacation rental in the big city, you might want to consider this one-bedroom apartment listed on VRBO. Located in Battery Park, which is downtown, the very first picture in the listing is of the Peloton bike in the living room. FYI, the nightly rate is cheaper than most New York City hotels! 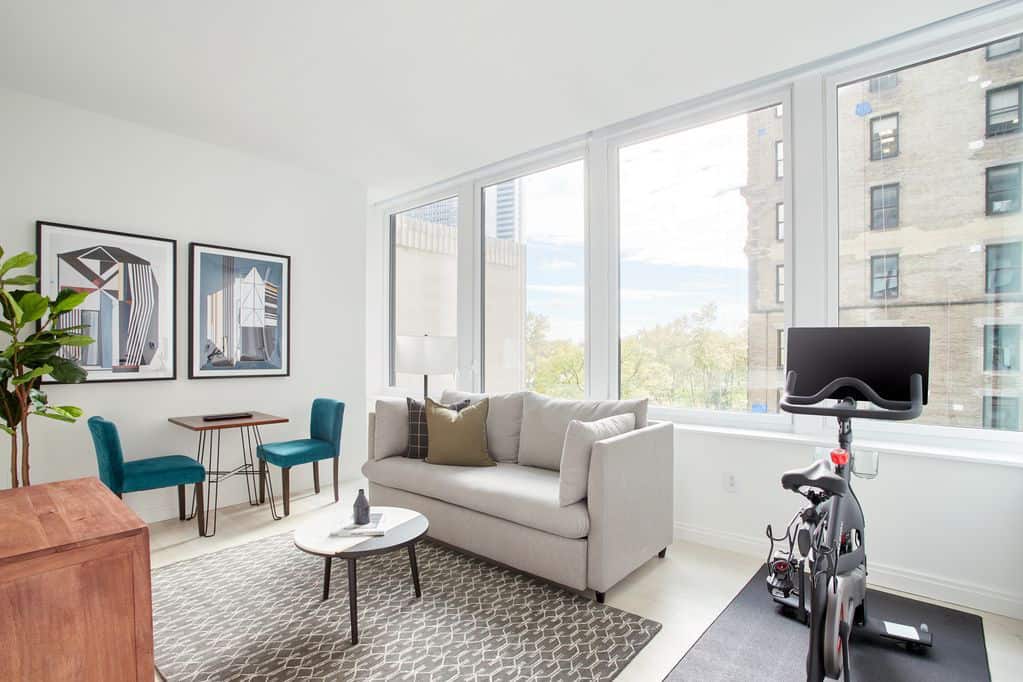 This is a one-bedroom, one-bath apartment in New York City’s hip Tribeca neighborhood. In the VRBO listing, it shows a Peloton in the living room. See picture, below.

However, the listing also says this host has multiple units available in this building. So, it’s not clear if every unit has a Peloton bike. Please be sure to ask/confirm before booking. According to the VRBO listing, this is a studio apartment with a Peloton near City Hall. That’s downtown Manhattan, near the financial district. This studio can actually sleep four people and it’s fairly generously sized for a New York City studio–more than 700 square feet. Thanks to a Facebook group I’m in of Peloton lovers, I discovered this pet-friendly, Peloton-inclusive three-bedroom bungalow rental in the Catskills in New York State. I’ve included a picture of the Peloton room, below. 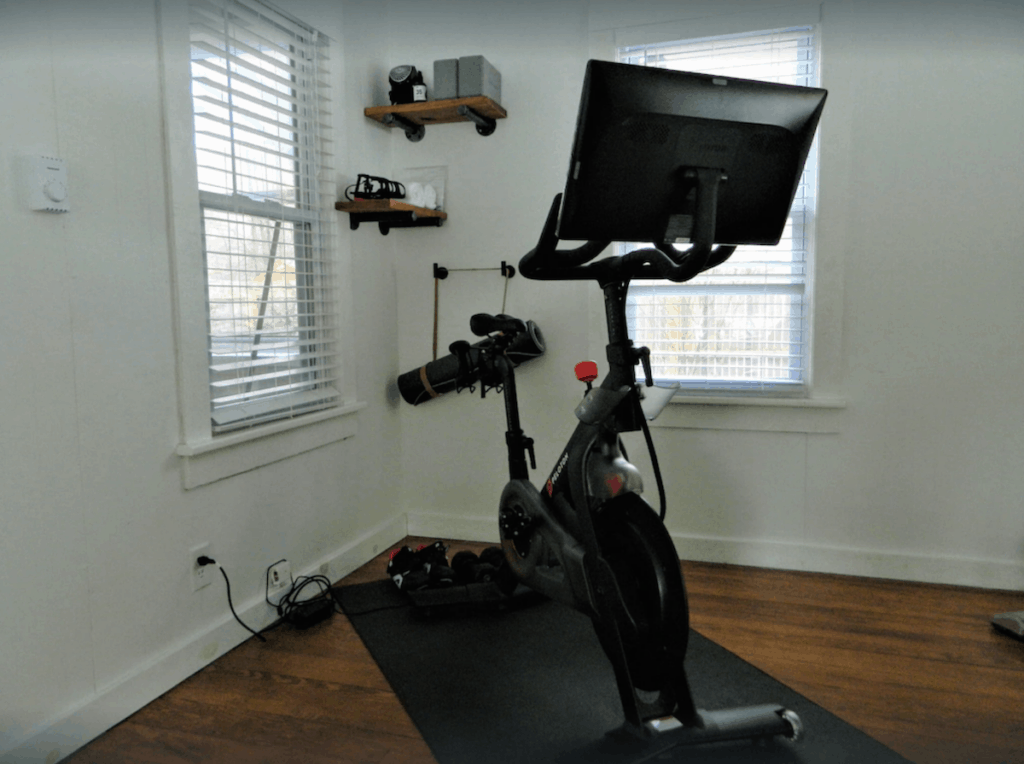 Here is what the VRBO listing for this two-bedroom, two-bath log cabin says about the Peloton bike:

“We don’t have a fitness room, but there is a Peloton bike available for use. Please let us know ahead of your visit if you would like access to the bike. Bring your shoes and your login details.”

Alas, there are no pictures of said Peloton cycle.

This five bedroom, three bath home in Monticello, in Sullivan County, New York, sits on the waterfront. And that waterfront is the Swinging Bridge Reservoir. The home has a dock, expansive deck, outdoor kitchen and an outdoor shower.

Inside, the house sleeps 15. The VRBO listing says there is a Peloton bike, here. However, there are no pictures or info on where in the home it is.

Just north of New York City, this Rhinebeck six-bedroom, four-bath vacation rental doesn’t specifically mention having a Peloton bike in it. However, while reviewing the VRBO listing photos, I spotted the bike in a hallway. It was a terrible pic, which is why I didn’t share it here. So, good to know if you’re looking to get away to someplace a short distance from the metropolitan New York area.

I hope you found this article on vacations rentals in New York State with Pelotons helpful. As I mentioned in my original article on these kinds of vacation rentals, I’ve purposefully excluded AirBnB because of unfair practices to renters and rentees. Therefore, I’ve only included the companies that I have for very good reason.