Hotels in Georgia with Peloton

While Atlanta isn’t the only Georgia city with Peloton hotels, it is where most are located. However, you’ll see from the alphabetical list below, there are a handful of other Georgia hotels that also have Peloton bikes.

Also, sadly, many of the original Atlanta Peloton hotels have since closed. This includes the W Hotel Midtown in Atlanta. It is permanently closed.

Despite having Atlanta in its name, the Atlanta Marriott Alpharetta is actually in Alpharetta, a suburb. It has one Peloton bike in its fitness center or hotel gym.

The Hotel at Avalon, Autograph Collection

You’ll find two Peloton bikes at The Hotel at Avalon, Autograph Collection. Specifically, there is one cycle with shoe or toe cages and SPD pedals on the reverse side. However, the second bike in the hotel gym comes with the original Look Delta cleat-compatible pedals. So you can clip in with your shoes from home.

On the Fitness Center page of The AC Hotel Atlanta Airport Gateway website, the hotel promotes the fact that they have a Peloton bike there.

The Atlanta Airport Marriott Gateway Hotel seems to have one Peloton bike in its fitness center.

There is at least one Marriott hotel in Atlanta with a Peloton bike. I saw someone post a picture while riding it in the Marriott gym. However, when I checked out the Atlanta Marriott Marquis’ website, I discovered that you can book a hotel room with a Peloton already in it. Sweet!

And most recently a friend reported that the hotel has upgraded to four rooms in the hotel with a bike in the room. I understand that you can request the room when you book online. You want the Peloton Bike room guest room with 1 king bed.

On the other hand, you can ask to be switched to one (if it’s available) when you check in. (That’s what she did.) And yes she had a view like the one in the picture, below. 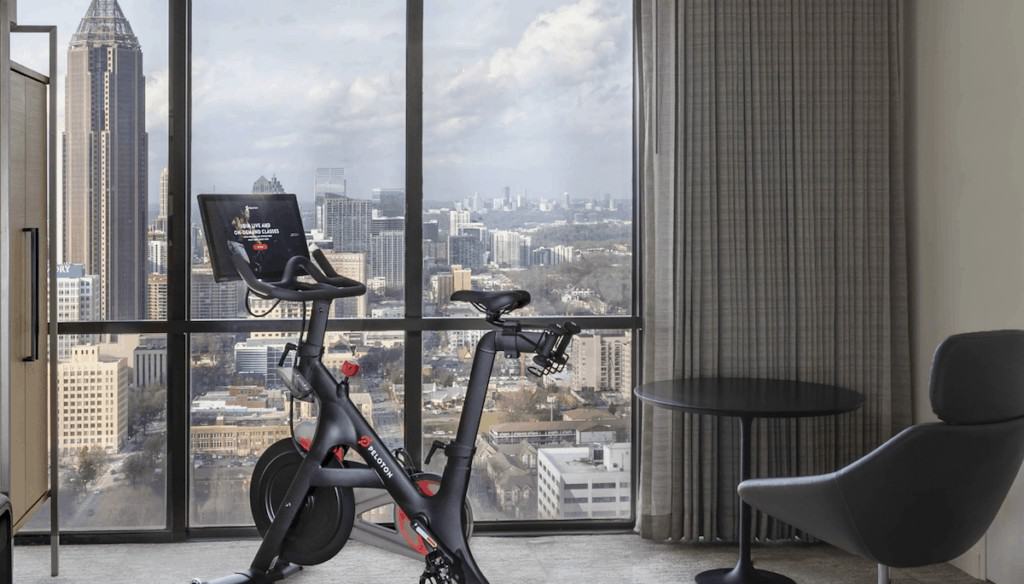 The Atlanta Marriott Northeast shared the picture, below, on its Facebook page. You’ll notice that there are two Peloton bikes in the fitness center.

This is one of two Atlanta hotels with Pelotons near Emory University. Good to know if you’re taking a child to tour the campus or you’re visiting a student there. It’s also why I’ll be adding this hotel to my post about college towns with Peloton bikes in them. 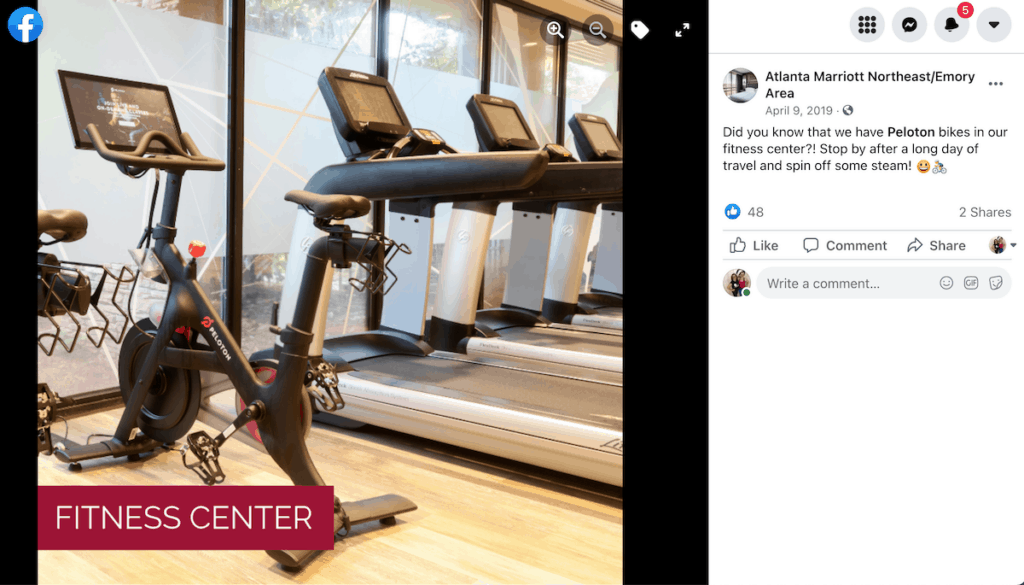 One of the newer hotels in Altanta, the Bellyard, West Midtown, a Tribute Portfolio Hotel is part of the Marriott family. Its fitness center includes two Peloton bikes. Also, the pedals appear to have shoe or toe cages. So, no need to pack your spin shoes.

Located in the Buckhead area of Atlanta, The Burgess Hotel has one Peloton bike in the hotel gym.

I couldn’t figure out from either The Candler Hotel website page or the Expedia page if there really was a Peloton in this Atlanta hotel. However, this CN Traveler article finally confirmed it. So then I went page and took a closer look. In the pictures on the Expedia Page, you can see two Peloton bikes tucked away in a corner.

A friend who works at Emory University tipped me off that the Emory Conference Center hotel has two Peloton bikes inside.

There is one Peloton bike at the Four Seasons Hotel Atlanta.

I’ve heard that there are two Peloton bikes at the Grand Hyatt Atlanta in Buckhead hotel.

There is one Peloton bike at the Hampton Inn and Suites Atlanta-Midtown.

Thanks for the Facebook post, shown below, I know that the Hotel Clermont has two Peloton bikes in the hotel gym. 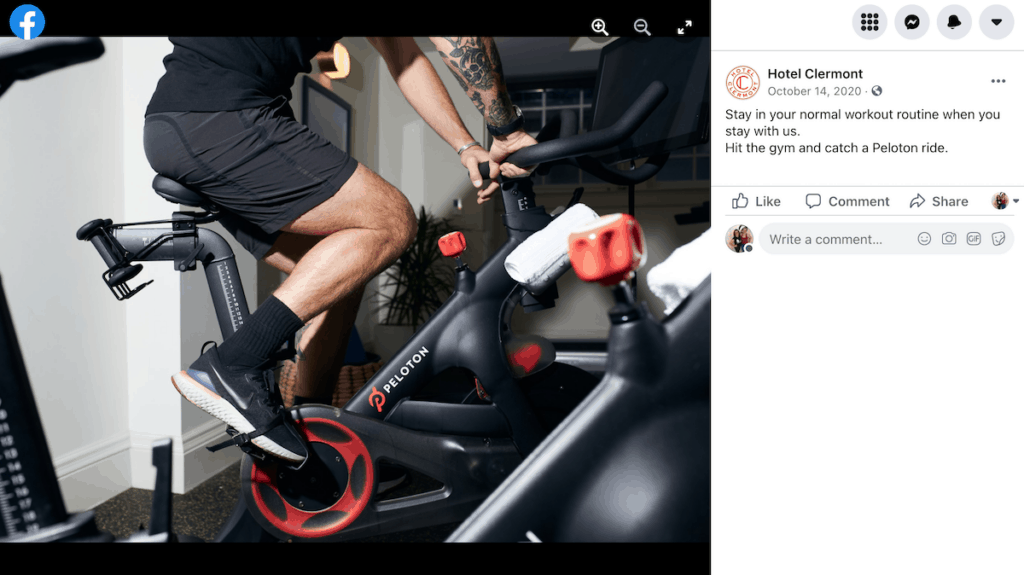 Opening day for the Hyatt Centric Buckhead Atlanta was December 2021. I’m told here are two Peloton bikes in the fitness center gym. Given how new the hotel is, I would think the bikes would be in excellent shape for your workout.

Thanks to a Facebook friend, I checked out the JW Marriott Atlanta Buckhead. He’d told me it was a hotel in Atlanta (well Buckhead) with Pelotons. He was right. The picture, below, of the two Peloton bikes, is from the hotel’s gym. 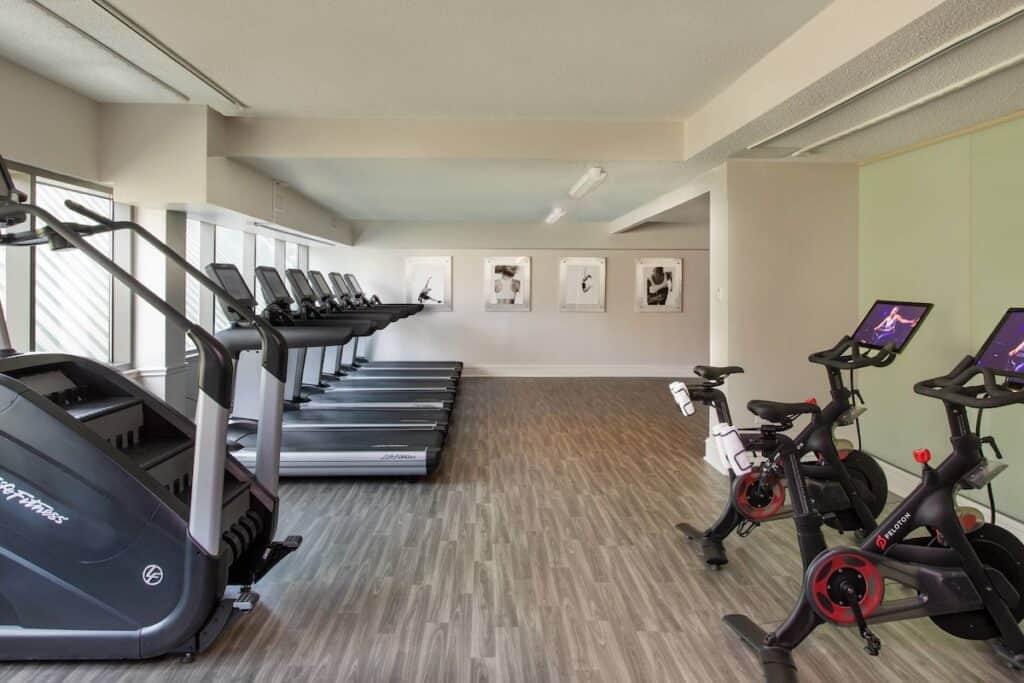 The Loews Atlanta Hotel has debuted something called Lifestyle Suites. These include a Peloton bike in room. Here is how the hotel describes them:

“New lifestyle suites offer all the amenities to keep your wellness routine on track including free Peloton classes.”

The picture, below, is what appears on the hotel website for the Lifestyle Suites. Clearly, it shows the Peloton bike in the room. 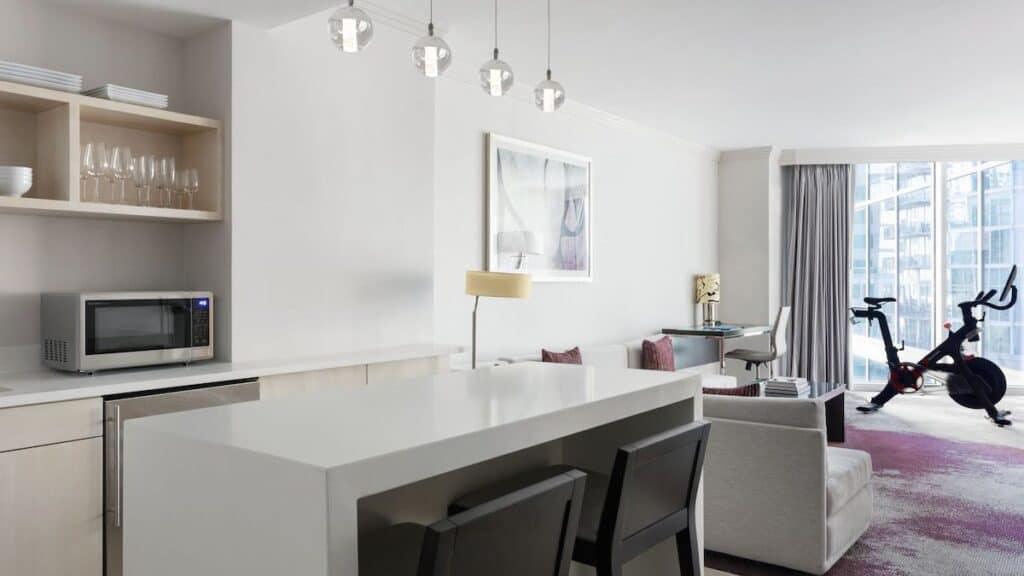 Omni Hotel at the Battery Atlanta

You’ll find one Peloton bike at the Omni Hotel at the Battery Atlanta.

Both a Facebook friend and a TripAdvisor review have confirmed that the Renaissance Atlanta Midtown Hotel is a hotel with Peloton bikes. In fact, when you visit the hotel’s Fitness Center page, you’ll see the two Peloton bikes there. They’re in front of a mirror, so at first it looks like there are many more Pelotons at this Atlanta hotel. So, just keep that in mind.

The Ritz-Carlton Atlanta has three Peloton bikes in its fitness center. Don’t be fooled into thinking you might find Pelotons in room in the Wellness Level suites, however.

While these rooms are health and wellness oriented, the only fitness equipment in them are stability balls, yoga mats and blocks and the like. Unfortunately, they don’t come with Peloton bikes, but don’t you think they should?

A friend recently stayed at the St. Regis Atlanta hotel and said there were two Peloton bikes in the gym. However, when I searched the Athletic Club (which is what the hotel calls its fitness center), they were nowhere to be found. But I didn’t give up hope.

Then, while searching through photos on the hotel’s website, I spied a Peloton. It was in the Empire Suite. It seems the Empire Suite has its own fitness studio. Not only does it have a Peloton bike in room but also a stability ball, hand weights and an elliptical machine.

One of the newest hotels in town, the Thompson Buckhead is part of the Hyatt family. It has at least one Peloton bike in its 24-hour fitness center.

People had told me that The Westin Atlanta Perimeter North had a Peloton bike, but I couldn’t find anything on the hotel’s website to confirm. However, by digging a little deeper, I did find a couple’s wedding website that mentions they’d booked this hotel so their Peloton-obsessed guests could get their workout in.

At the Westin Peachtree Plaza Atlanta, the three Peloton bikes in the hotel gym are in their own separate space. All appear to have shoe cages on their pedals.

Note: There is a Westin Workout Room at this hotel. However, from pictures on the hotel website, it shows a regular spin bike in the room, not a Peloton.

You wouldn’t know that The Whitley has a Peloton bike in its hotel gym. There is no mention of it anywhere on the hotel’s website. And none of the photos of the fitness center show a Peloton. However, I found a Facebook post that mentions it having a Peloton, but, again, no photos. 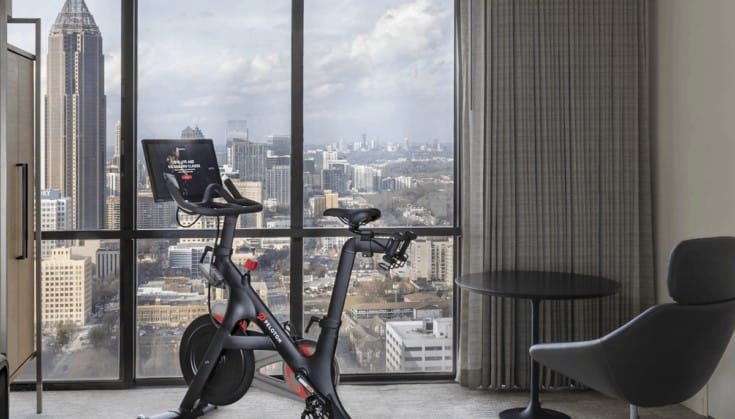 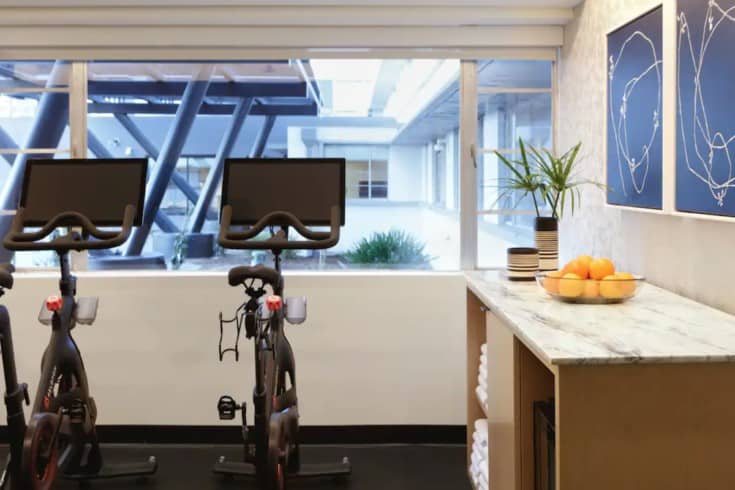 If the Chateau Elan Winery & Resort hadn’t posted the photo, below, to Facebook, I never would have known it was a Georgia hotel with a Peloton. 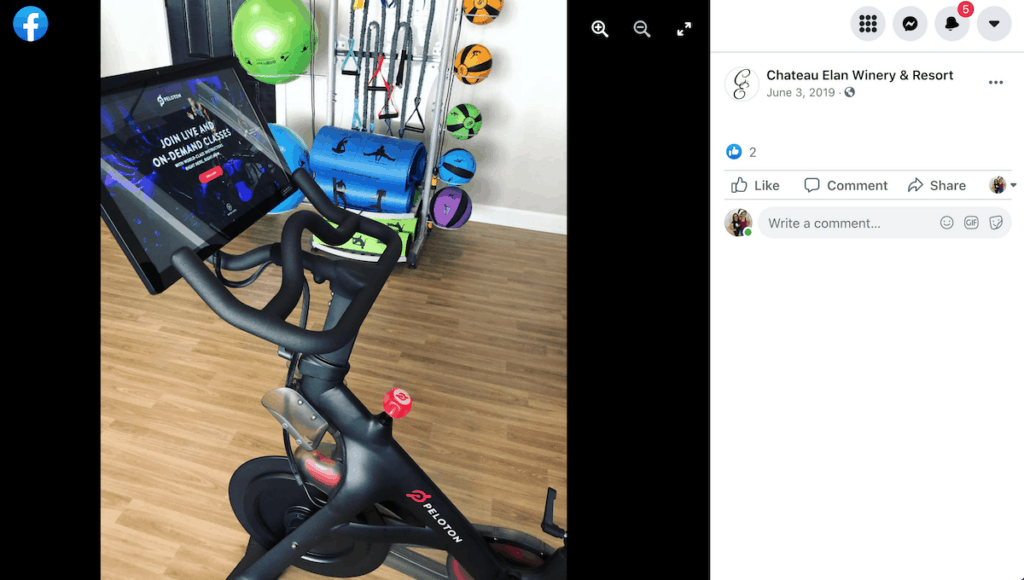 Dunwoody, Georgia, is a suburb of Atlanta. So if you’re looking for a hotel with a Peloton bike near to Atlanta, these hotels can help.

More of a resort than a hotel, The Ritz-Carlton Reynolds Lake Oconee has three Peloton bikes in its fitness center.

A Facebook friend just returned from a stay at the Westin Jekyll Island. While there she commented on how it was too bad the hotel didn’t have Pelotons. Well, guess what? I just found out the hotel has ordered two bikes. They should be there in September 2021.

The Alida hotel has a single Peloton bike.

The 24-hour fitness center at Mansion on Forsyth Park has one Peloton bike, shown, below. 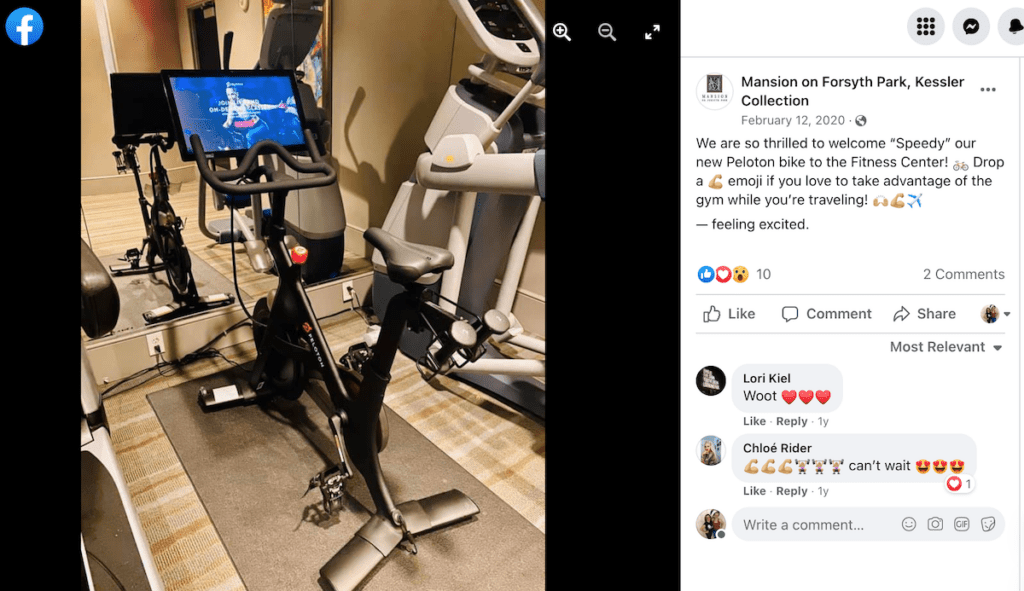 Multiple people have confirmed that the Perry Lane Hotel in Savannah is, in fact, a Peloton hotel–with two bikes there.

There is one Peloton bike at the River Street Inn.

Now as far as the Pelotons at the Thompson Savannah go, the hotel refers to them in the plural. And when I looked at the hotel’s Expedia page, I saw the photo, below. It shows two Peloton bikes. 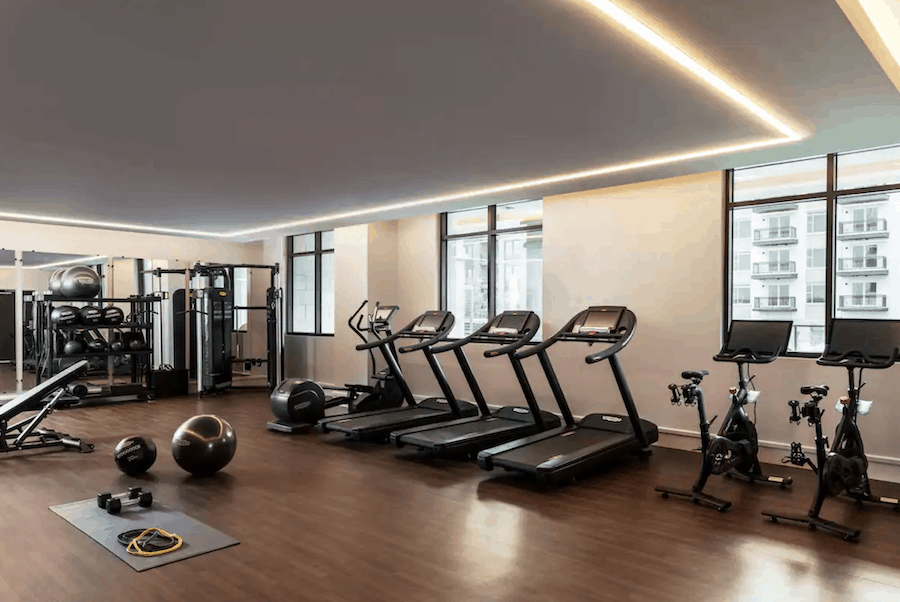 There are two Peloton bikes in the Westin Workout Fitness Studio at the Westin Savannah Harbor Golf Resort and Spa.

Final thoughts on hotels in Georgia with Peloton

Like so many of these Peloton hotel posts, this one focused on Georgia is a work in process. It feels like nearly every week I learn about a new hotel with Peloton bikes.

So, rest assured that as I come across new information–and can confirm it through my fact-checking process–I’ll add it to this post. In the meantime if you stay at a Georgia hotels with a Peloton, or work for one, and I don’t have it on my list, please reach out by posting a comment below.