I’ve just written this blog post about Peloton hotels in Arizona. It grew out of my larger post on hotels with Peloton bikes worldwide.

As that larger blog post grew to be too large and long, I’ve been breaking out these articles into location-specific blog posts. Some other locations I’ve since covered that are near to Arizona include:

Where are the Peloton hotels in Arizona

For the most part, most of the hotels with Pelotons in Arizona are in these four cities. And they are:

I’m not surprised that there’s a cluster of Peloton hotels in Tempe, a college town. Considering the popularity of hotels near colleges and universities to have Peloton bikes in their hotel gyms, Tempe fits right in.

By the way, here is my post about college towns with Peloton hotels.

Below, you’ll find the list of Peloton hotels in Arizona. This is a list I’ve put together based on my own research and fact checking. I’ve used a variety of resources to come up with this list.

Finally, you may discover that I have not included hotel properties that other similar sites have mentioned. That’s because if I could not independently confirm that a Peloton cycle was still at the hotel, I chose not to add it to my post.

If I hadn’t clicked through the pictures on the Marriott Phoenix Chandler hotel’s website, I never would have discovered the Peloton bike there. It’s featured in two different images, including the one I’ve shared, below. 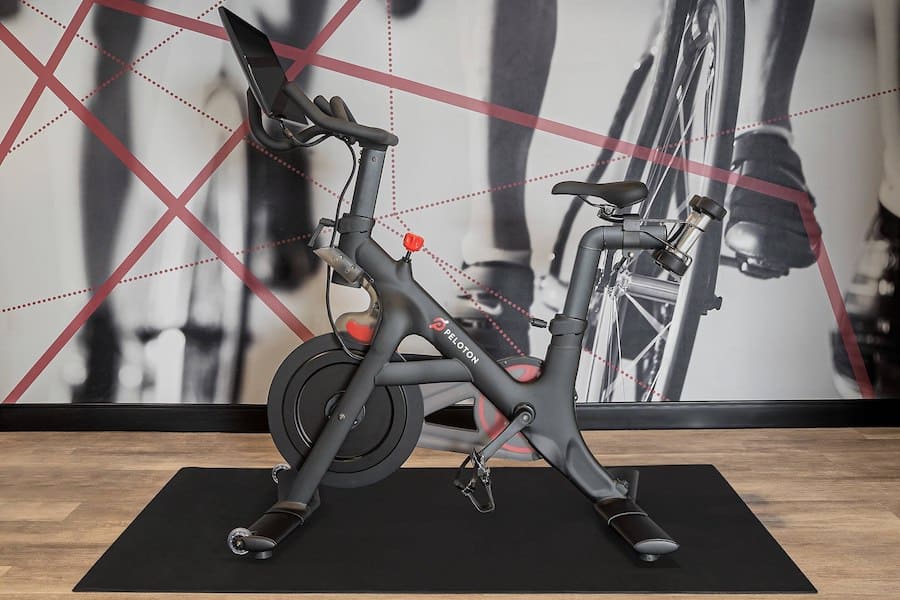 You’ll find one Peloton bike in the fitness center of the Cibola Vista Resort and Spa, a Bluegreen Ascend Resort.

Here’s a Waldorf-Astoria deal to consider: Enjoy a $100 daily credit at all participating Waldorf Astoria Hotels & Resorts when you stay for two or more nights and book three days in advance.

There is at least one Peloton bike at the Hyatt Place Phoenix / Downtown hotel.

I’m not sure how recently the Hyatt Regency Phoenix added a Peloton to the hotel gym. However, I did learn this from an Instagram post, shared below. If you book the two-bedroom Grand Canyon Suite, you’ll get your own personal Peloton in your guestroom. 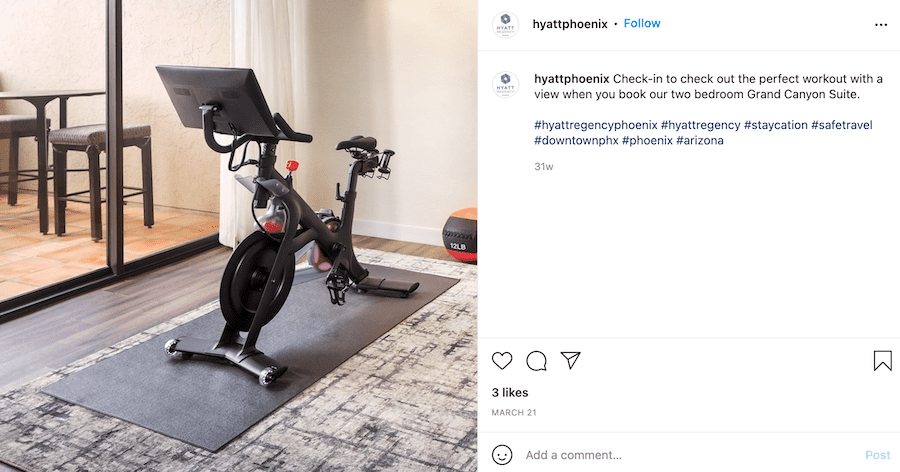 I kept hearing that the JW Marriott hotels in the Phoenix area had Pelotons in the gym. But I couldn’t confirm it at the one in Scottsdale or elsewhere in the area.

Finally, I discovered the Revive Spa Fitness Center at the JW Marriott Phoenix Desert Ridge Resort & Spa. Right away, you can see the two Peloton bikes in the gym.

You’ll find two bikes in the Thrive Fitness Center aka the hotel gym at the Renaissance Phoenix Downtown Hotel. 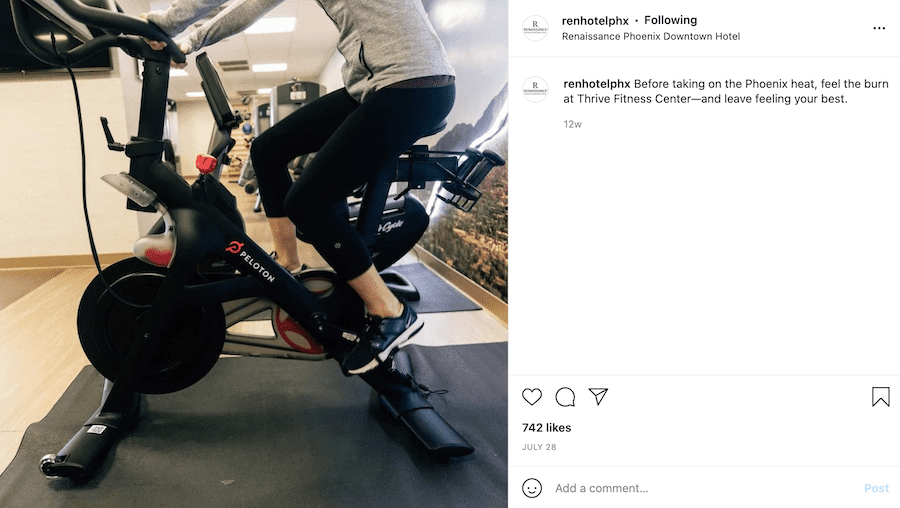 My sources tell me that the Westin Phoenix Downtown has two Peloton bikes. However, there are two caveats.

One, one of the bikes in the hotel gym doesn’t work well in that it’s hard to adjust. And two, the WiFi is so spotty in the gym that it makes streaming difficult. So, you might want to hotspot to your phone and the Peloton bike if you visit and want to use it.

One of the newer Scottsdale Peloton hotels, the Adero Scottsdale, part of the Marriott Autograph Collection, has quite a collection of Pelotons here.

That is, there are 12–yes, I said TWELVE–Peloton cycles in the “Peloton Studio,” which is separate from the rest of the fitness center gym. See photo, below. 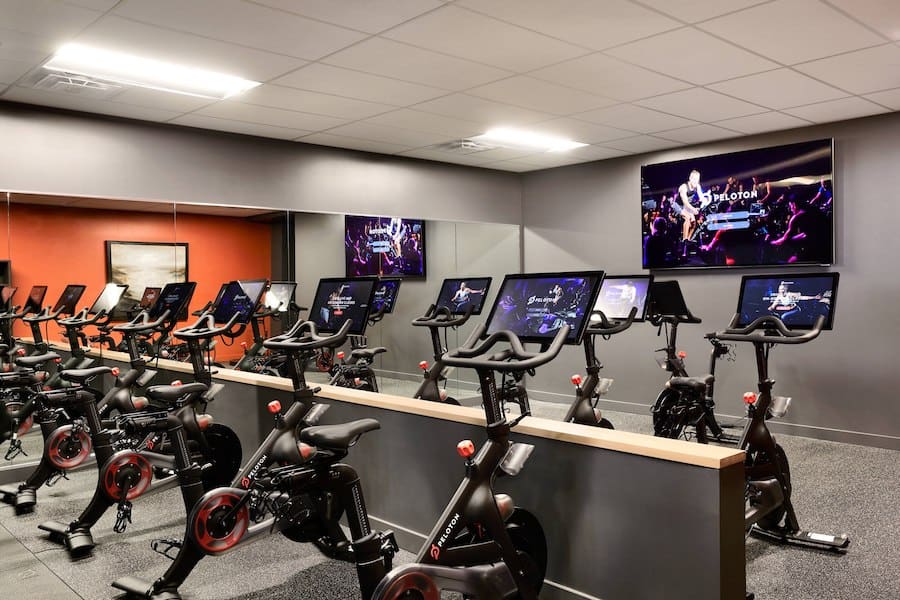 You’re going to love the hotel gym at the Andaz Scottsdale Resort and Bungalows. One, it has two Peloton cycles you can use. Two, the fitness center opens to the outdoors so you can work out in plenty of fresh air.

The vibe at Hotel Valley Ho is hip and modern–that is, mid-century modern. But the hip part means you can add it to the list of Peloton hotels in Scottsdale, Arizona.

A friend of mine posted a picture on Facebook of the Peloton cycle at the Hyatt Regency hotel in Scottsdale. In addition, many people have posted on Trip Advisor about how much they have enjoyed using the Peloton at the hotel. Finally, now it seems this Hyatt has two Pelotons.

I’m told there are two Peloton cycles at the Omni Scottsdale Resort & Spa. Also, the view from the hotel gym is stunning. 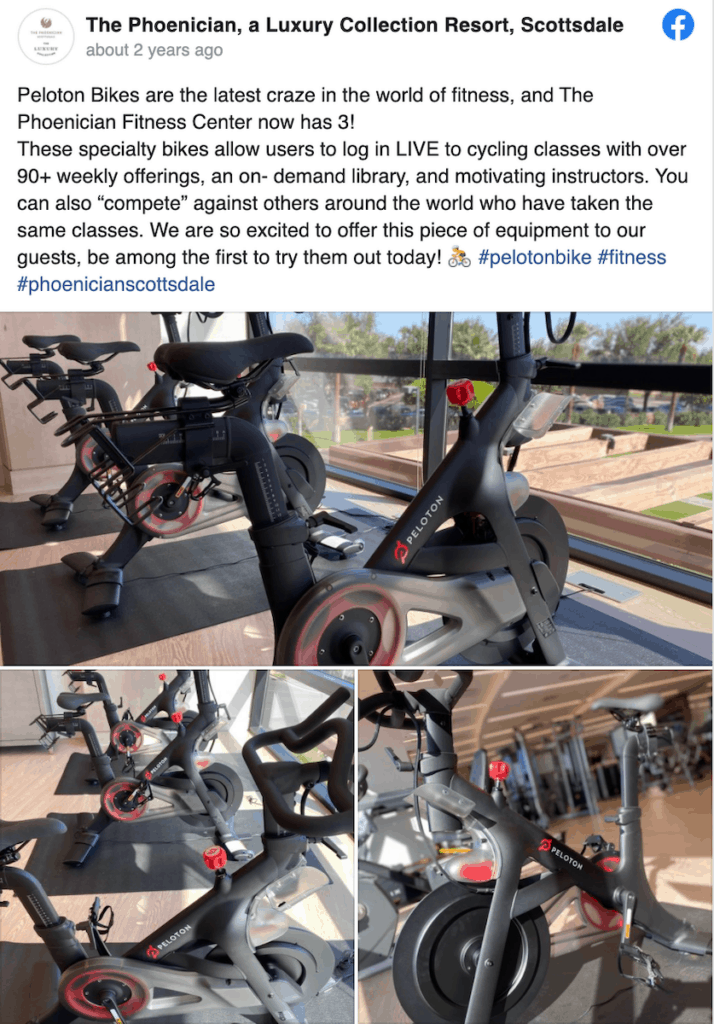 The Royal Palms Resort and Spa refers to its single Peloton cycle as “our new Peloton bike.”

At the Scottsdale Marriott at McDowell Mountains, you have the option of booking a Peloton Suite. That is, a guestroom suite with its own in-room Peloton bike.

To find and book the Peloton Suite, look on the “hotel rooms” page of the property’s website. Then, look for the room listed like this: “Peloton Suite: No Balcony, 1 Bedroom 2 room Suite, 1 King, Sofa bed.”

Finally, this Peloton Suite appears to be the only bike on site. The hotel gym doesn’t list any Pelotons there.

Word around town is that there is one Peloton bike at the Scottsdale Marriott Old Town, and it’s not in great shape. However, if I hear a more positive update on the bike, I’ll post it here.

There is a single Peloton bike at the Westin Kierland. A friend said it has Peloton pedals with straps or toe cages on one side and SPD on the other side.

What a fitness center L’Auberge de Sedona has. Not only is it open 24 hours, but it includes the following:

This article on hotels with Hydrow rowers can help you find properties nationwide with this high-tech rowing machine.

The Sky Rock Inn at Sedona is all about your well being. So it’s no surprise that it has a Peloton bicycle in its fitness center.

The management of the Aloft Tempe

reached out to me. They asked me to add their property to the list of hotels with Peloton bikes.

I’m so glad they did because there is no mention of it being a Peloton hotel anywhere that I could find on its website. You can book directly on the Marriott site for the Aloft Tempe.

The Graduate Hotel Tempe, adjacent to Arizona State University, has one Peloton bike in its fitness center.

A brand-new hotel in 2021, the Westin Tempe has one Peloton bike on property.

The Armory Park Inn describes itself as a luxury, Tucson bed and breakfast or B&B. You can see a photo, below, of the single Peloton bike in the hotel gym. It is featured on the hotel’s Expedia page. 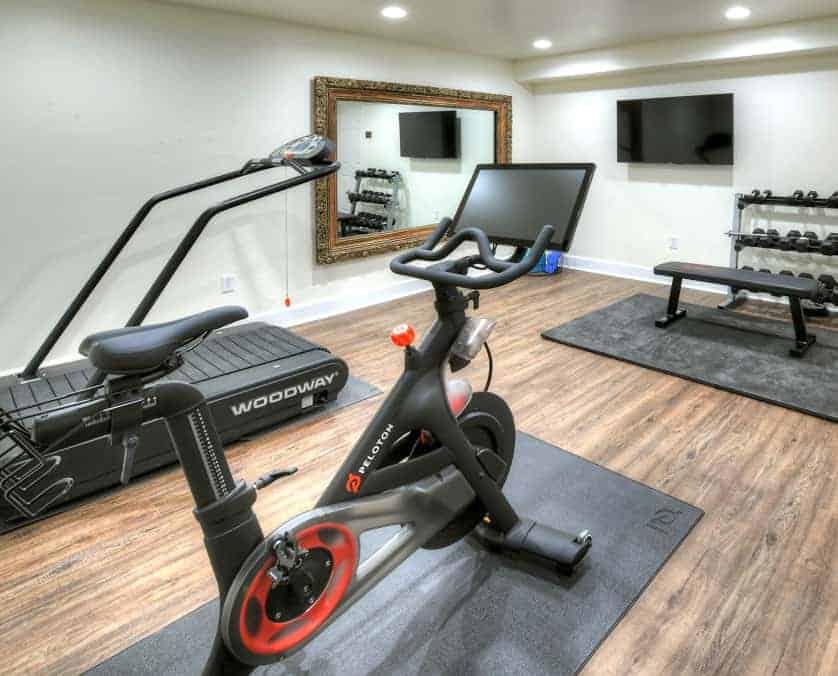 Thankfully, friends recently stayed at the Loews Ventana Canyon Resort. They shared on social media about the two bikes in the hotel gym.

Good to know, since I couldn’t find information online anywhere else about the existence of these Pelotons. However, once I got this intell, I checked out the hotel’s Facebook page and found the post, below. 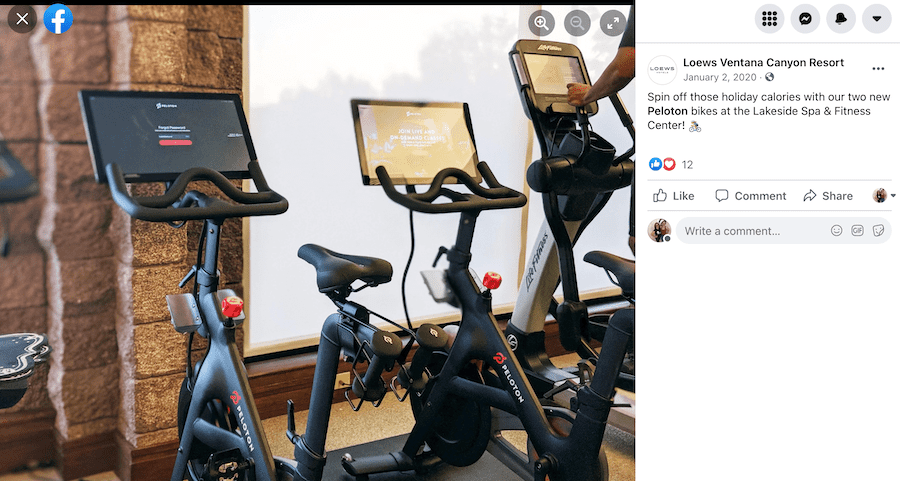 Miraval is a hotel in the Hyatt family. It is an adults-only, all-inclusive resort in Tucson.

I could not find any mention of Peloton on the hotel’s website. However, I’ve heard directly from people who have stayed there that the Miraval Arizona is a hotel with a Peloton bike.

Two people gave me a heads up that the Westin La Paloma Resort & Spa has two Peloton bikes in the hotel gym. That’s good to know since the hotel webpage makes no mention of them.

Have I missed any hotel properties in Arizona that have Peloton bikes in the gym? If so, please reach out or post a comment below to let me know. On the other hand, as I come across new information about Arizona hotels with Pelotons, I’ll be sure to update this post.