I’m very excited to write this post on Pennsylvania Peloton hotel. Why? Because in the past 25 years, I’ve spent nearly 20 of them living in Pennsylania. First, we lived outside Philadephia. Then, we moved across the commonwealth. Now, we live outside Pittsburgh.

As it turns out, Pennsylvania is a great state for finding Peloton hotels. There are ton in both Philly and Pittsburgh, and many towns in between–including State College, home of Penn State.

For college towns with Pelotons, please read this blog post.

Why write about Peloton hotels in Pennsylvania

Like so many of these Peloton hotel articles I’ve written, this one started in my bigger Peloton hotels post. However, as that one grew to be overwhelmingly long, I decided to break it out. Therefore, this is one in a series of location-specific listings and guides.

In the process I’ve been double-checking the existence of Peloton bikes in the various hotels. In addition, I’m adding new ones that I’m confident do not appear on any other hotel finder geared towards Pelotons.

Finally, you can feel confident that the information you’l find below includes the most up-to-date details. However, if I’ve missed something, you are always welcome to reach out to me to set the record straight.

Below is my list of and guide to hotels in the Commonwealth of Pennsylvania that have Peloton bikes in the gym or fitness center. This list is organized alphabetically by town or city. Then, within each town or city, hotels are organized alphabetically. It’s a pretty straightforward way of presenting the information, and I hope you find it helpful.

The Omni Bedford Springs Resort recently redid its fitness center and hotel gym. When it reopened, it shared the picture, below, of the Peloton bike there.

Many years ago I wrote a review of the Spa at the Hershey Hotel. My wonderful experience there would be enough to go back.

Now I’ve learned that the Hershey Hotel has a Peloton spin bike in its gym. Certainly, this is yet another reason to visit again.

The hotel may have moved the bike from the newly renovated fitness center into the Spa area. Be sure to ask at the desk as I took a virtual tour of that new space and didn’t see it there.

Another property in Hershey, some Facebook friends posted pictures of two Peloton bikes in the Hershey Lodge fitness center. Both bikes have toe or shoe cages on the pedals.

The Alloy is part of the Hilton hotel family. Located near the King of Prussia Mall and Valley Forge, The Alloy has two Peloton bikes on site, shown, below. 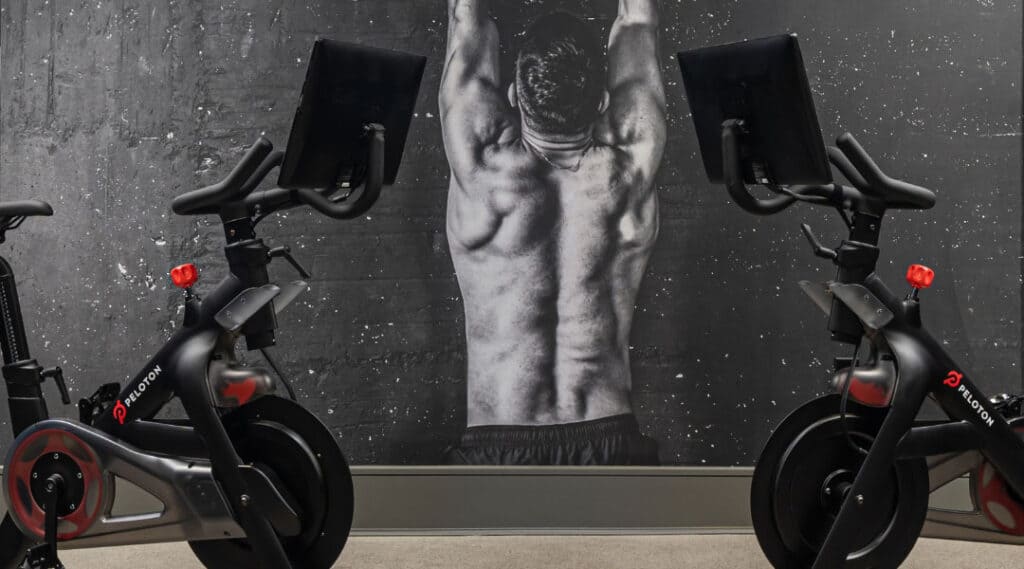 Located near Lancaster aka Amish Country, Lititz is home to Hotel Rock Lititz. There you’ll find one Peloton bike in the hotel gym.

Near the Main Line of Philadelphia, the Homewood Suites by Hilton Philadelphia-Great Valley just added two Peloton cycles to the hotel gym. The addition is not reflected on the hotel’s website, however.

While AKA University City falls into the category of hotel, its rooms are more like a private apartment residence–a luxurious, upscale apartment. So it’s not surprising that the AKA has at least two Peloton bikes in its fitness center called Level 28. It’s on the 28th floor of the hotels so you can just imagine the views!

Like so many other Club Quarters hotels, the CQ Philadelphia Rittenhouse Square has Pelotons in the hotel gym. In fact, there are two Peloton bikes there.

A private club that’s part of the Mr. And Mrs. Smith exclusive hotels, the Fitler Club has at least one Peloton bike in the hotel gym.

Located in one of Philly’s tallest buildings, the Comcast Center, the Four Seasons Hotel Philadelphia has just one Peloton bike in its hotel gym and fitness center.

My research tells me there are at least two Peloton bikes in the gym at the Loews Philadelphia Hotel.

While The Logan Philadelphia, Curio Collection by Hilton website does not mention there being two Peloton bikes in its fitness center. However, at least two people IRL have confirmed that they are, in fact, there.

Formerly the Pod Philly Hotel, Motto by Hilton Philadelphia Rittenhouse Square has one Peloton bike in the fitness center gym.

There is one Peloton bike in the gym at The Rittenhouse Hotel.

You’ll find one Peloton bike in the hotel gym at the Ritz-Carlton Philadelphia.

Newly renovated and reopened, the Sheraton Philadelphia Downtown has two Peloton bikes in the fitness center and hotel gym.

The Study at University City

Situtated close to Drexel University and the University of Pennsylvania, The Study at University City has two Peloton bikes in the 24/7 fitness center. However, don’t go by the photos on the hotel website, because they just show “regular” spin cycles.

The Westin Philadelphia has two Peloton cycles in its gym, as shown, below. 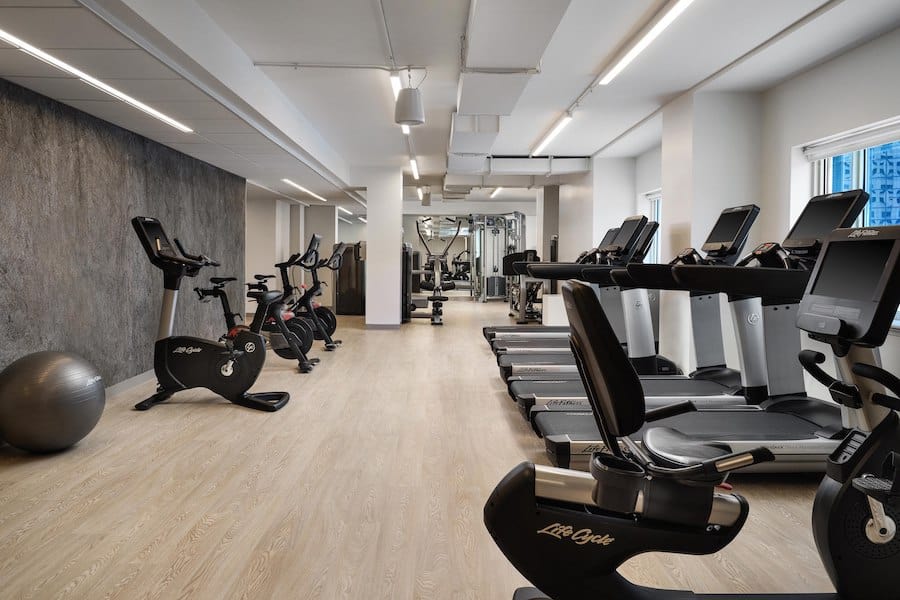 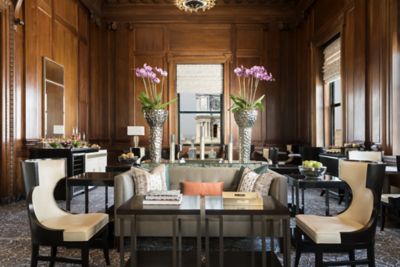 I was able to take a virtual tour of the hotel gym at the Fairmont Pittsburgh. Therefore, I can confirm it has three Peloton bikes.

The Homewood Suites by Hilton Pittsburgh Downtown, a hotel located in the Strip District, shared the following message on its Facebook page recently:

“Starting May 1st we will have 3 of our King Studio Suites with Peloton bikes in them!”

Like many other Kimpton hotels, the Kimpton Hotel Monaco Pittsburgh, right in downtown, has two Peloton cycles in the fitness center. From the looks of a picture a friend posted, the bikes have shoe cages for riding and, possibly, SPD pedals on the other side. Call and ask if unsure.

Located super close to the downtown Convention Center, the Westin Pittsburgh seems to keep changing where the Peloton bikes on property are. At first, they were in the Westin Workout Rooms–private suites where you could book a stay and have the Peloton in room with you. However, when you look at those rooms online now, they just have a “regular” spin bike in them–not a Peloton. Now, it appears the Pelotons are in the hotel gym, where they are mentioned by name.

The Graduate Hotel State College has a single Peloton bike on premises.

The Hyatt Place State College hotel has a single Peloton bike in its fitness center. I discovered it by browsing its Facebook page (picture below). 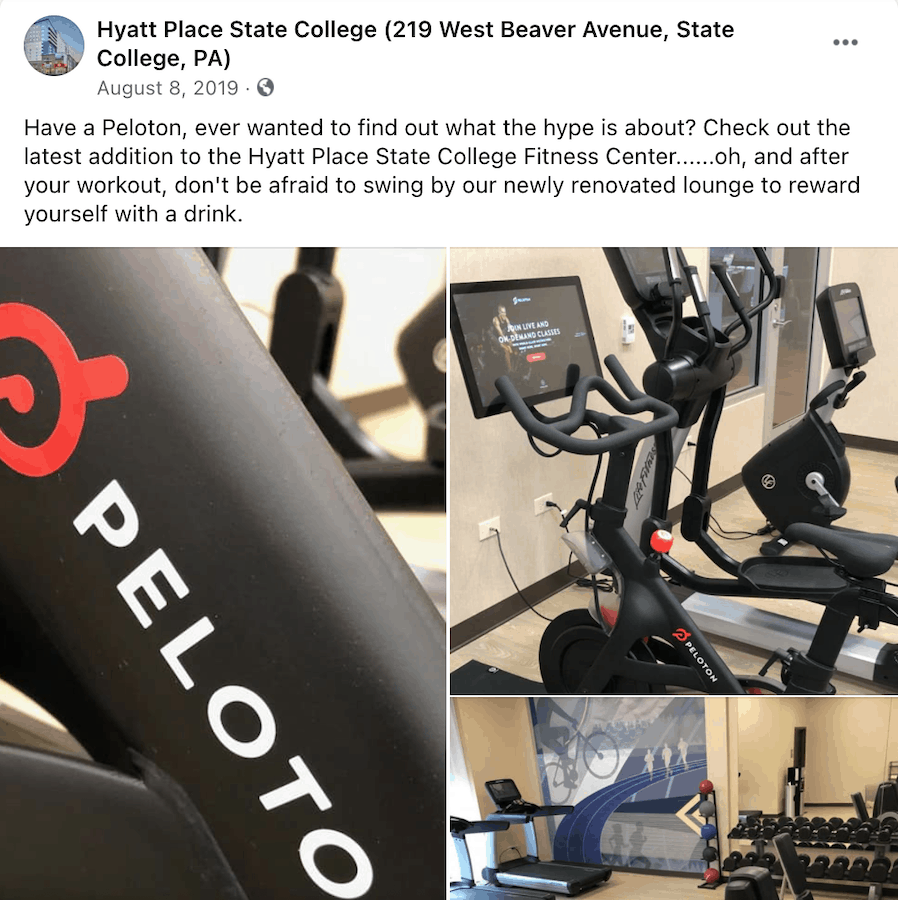 Non-hotel in Pennsylvania with Pelotons

The Rocky Run YMCA in Media, PA, on the Philadelphia Main Line, added a Peloton bike to its gym. Ask when you’re in the area if you can get a day pass to use it.

Part of the Great Philadelphia YMCA family, the Christian Street YMCA has two Peloton bikes for members to use. Like the other Philly area YMCA mentioned above, I would inquire about a day pass if you can’t find a Philadlephia Peloton hotel.

As a long-time resident of Pennsylvania, I’m saddened that there aren’t more Peloton hotels in the commonwealth. However, I shouldn’t be surprised that most of them are concentrated in Philadelphia and Pittsburgh.

On the other hand if I’ve missed any Peloton hotels in those cities or somewhere else in Pennsylvania, please let me know. And if I got anything wrong here, I’d love to hear from you, too.