I should have thought about writing about celebrities on Peloton before taking the recent Lizzo two for one ride. Why? Because I would have searched for Lizzo’s username on the screen during the ride.

Now, granted there were something like 20,000 people on that ride. So my chances of figuring out her screen name were pretty slim as they went by on the Leaderboard. Still, I could have tried.

Nonetheless, during that class someone asked her if she was going to get a Peloton after her in-studio experience. And Lizzo replied that she already had one. Which got me thinking: how many other famous people and celebs like Lizzo are on the Peloton leaderboard at any given time.

I know that Rob Lowe has a Peloton. So does President Biden. Remember the controversy about how he wasn’t going to be able to take his Peloton bike with him to the White House, because of security reasons?

Also, Hugh Jackman is another famous person with a Peloton. In fact, a few years ago, the Internet blew up when Jackman shared a picture of his Peloton bike tablet and a PR.

What was the big deal? Well, he’d accidentally shared his username, too. At that time his screen name was HJGO. I understand that soon thereafter he changed his name on Peloton to something else. No one knows what it is now. (I wonder if Jackman has done any of The Greatest Showman Peloton classes?) 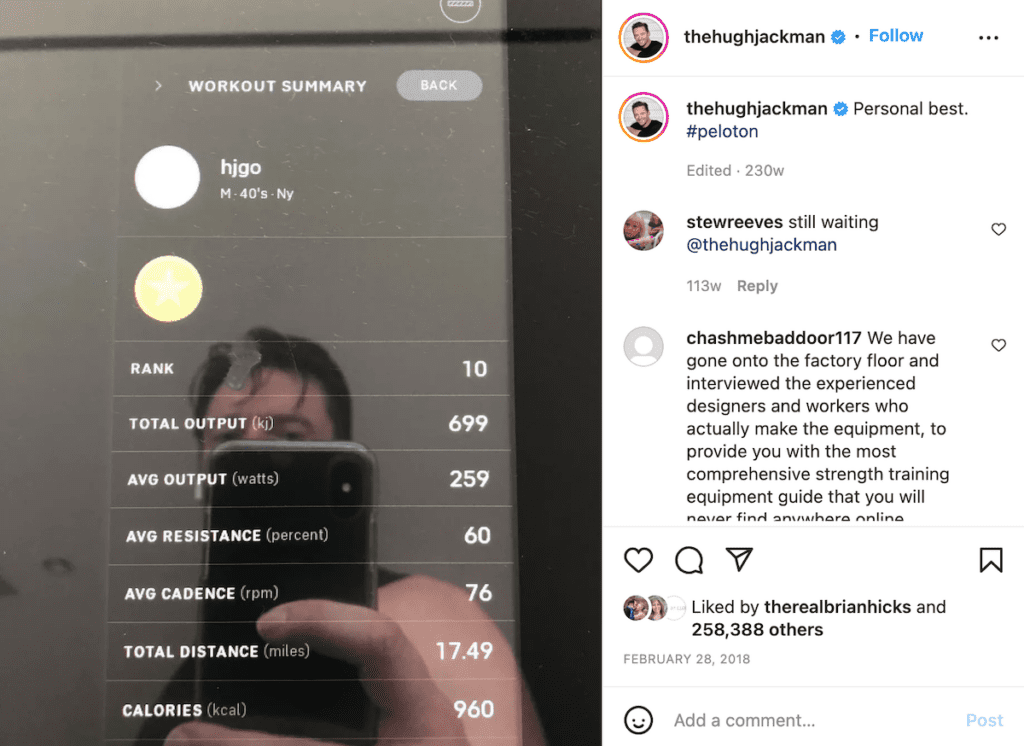 In addition, in 2020 Peloton instructors Alex Toussaint and Robin Arzon led a cadre of professional athletes in Peloton rides to see who would come out on top. This all-star ride was a collaboration with ESPN.

Now it wasn’t clear if these athletes were riding on their own personal Peloton bikes or whether ESPN/Peloton provided them for this event. However, here were the names of these famous athletes that participated:

Speaking of Allyson Felix, this is not the first time that she’s collaborated with Peloton. During my favorite outdoor walk with instructor Jess Sims, she talks about a Peloton homecoming event that included discussions with Felix along with Usain Bolt and Scout Bassett. Given this connection, I think it’s safe to say that all three likely have a Peloton bike at home or at least are using the Peloton app.

And later on in this article I’ll list Peloton celebrity usernames if I can find them. I can confirm that I’ve got the screen names on Peloton for Bolt, Bassett and Felix. Also, Joe Jonas and Usain Bolt have participated in the Peloton On the Leaderboard video series with instructors Olivia Amato and Jess Sims. So we know those celebs are part of the Peloton cult, er, community. 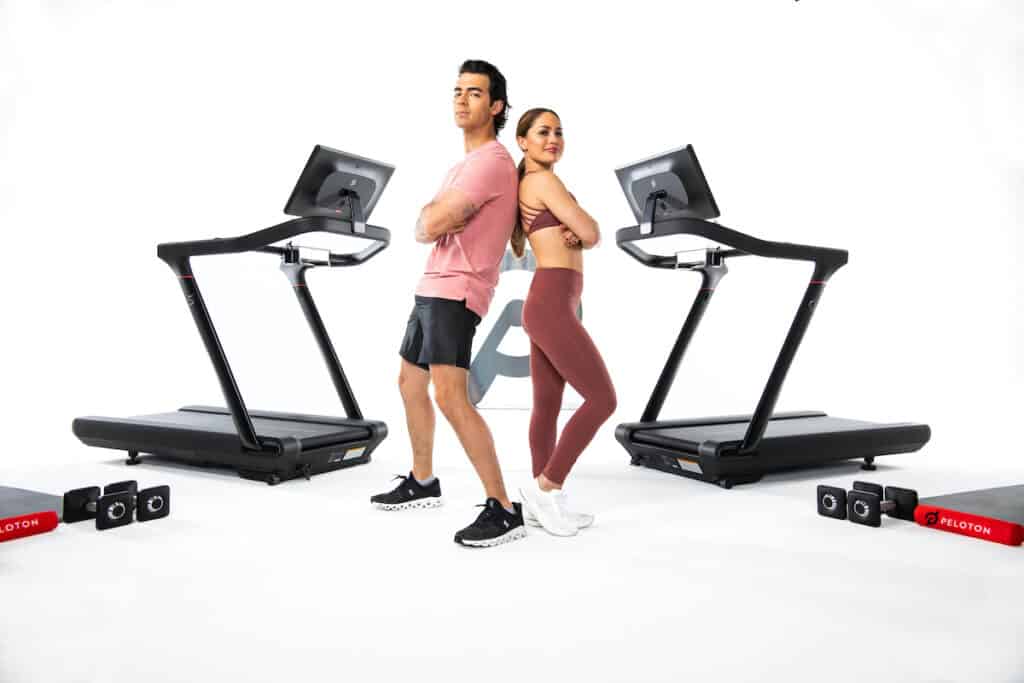 One of the ways that many celebrities out themselves as Peloton users is through their social media accounts. I know that many people have spotted Pelotons in the background of celebrity social media posts.

Or, these celebs post themselves working out on their Peloton equipment, be it the bike or the Tread. For example, actress Candace Cameron Bure posted a video on TikTok of her ugly crying on her Peloton bike. (Hey, Candace, we’ve all had an ugly cry at one point or another on the bike.)

I wonder how many new images we’ll see in the coming year of celebs using the Peloton Row. That’s the expected name of the Peloton rower. (Here’s why you don’t need to wait for the rower.)

Anyway, below are some images I grabbed from Instagram of celebs like Lizzo, Alicia Keys and Miley Cyrus on their Pelotons. 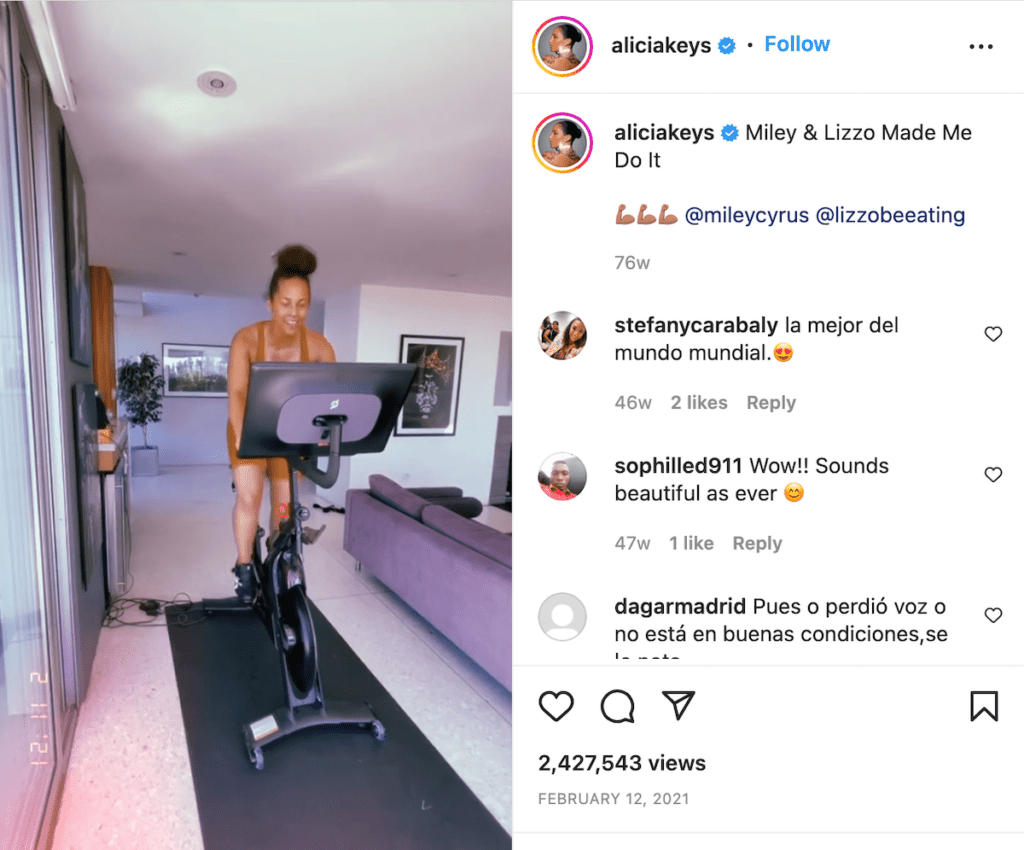 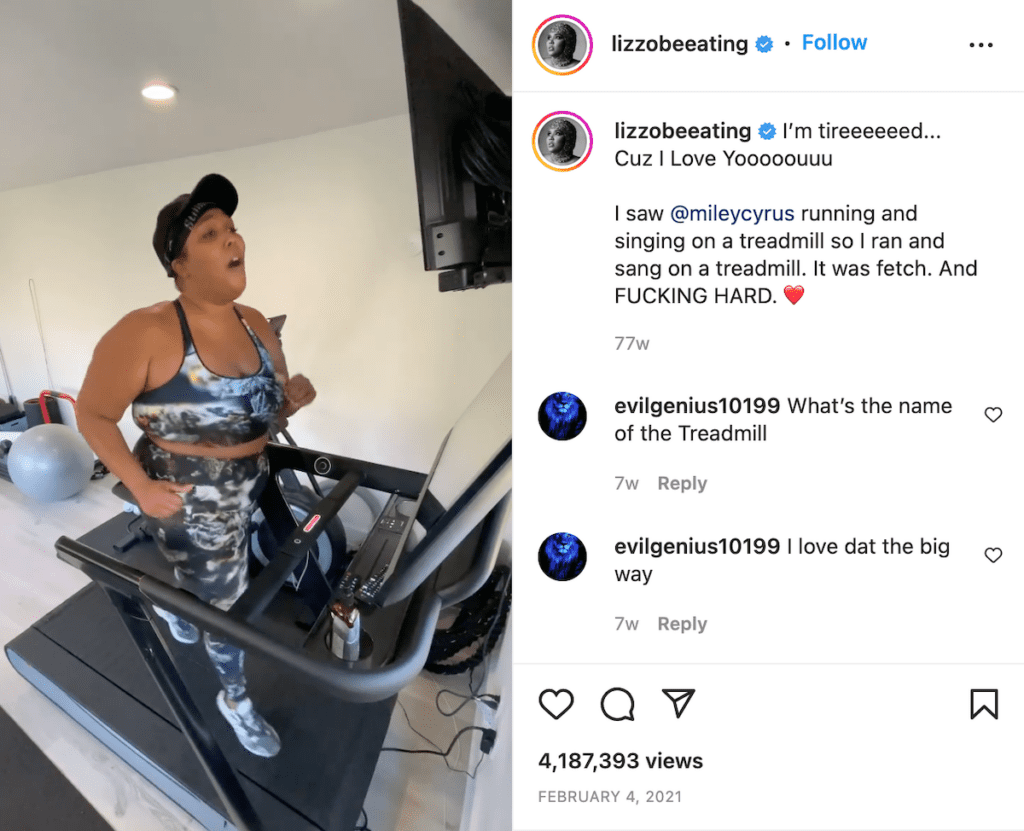 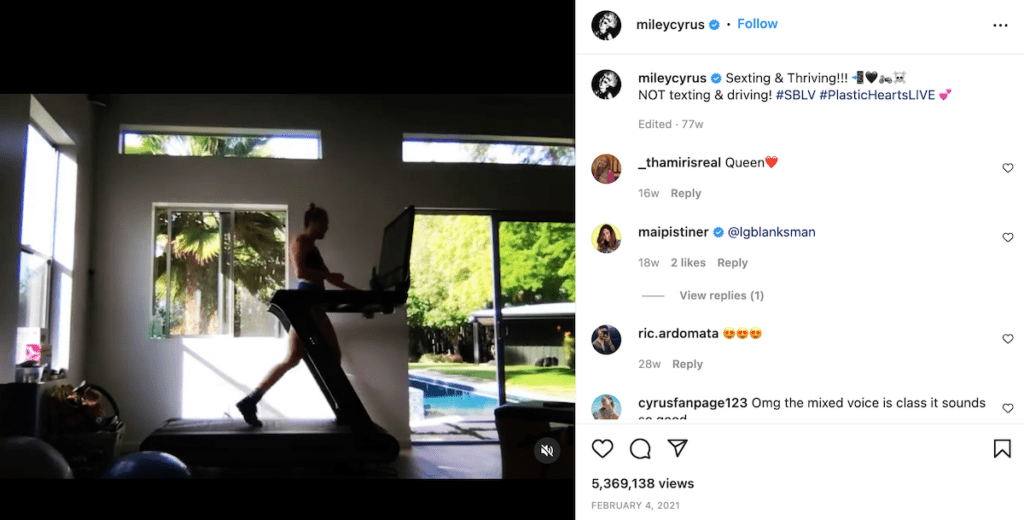 Other famous people on Peloton

Besides singers and actors, there are other famous people who’ve confessed their love for their Peloton. For example, designer Brittany Allen, a semi-finalist on Season 18 of “Project Runway,” has shared social media posts of her workouts with a Peloton bike in the background.

Also, she’s developed a friendship with many Peloton instructors, now that she’s designing activewear and workout gear. If you look at her Instagram feed, it’s filled with pictures of the clothing she’s designed for Jess King, Ally Love, Emma Lovewell and Camila Ramon–along with the instructors themselves with her.

So I guess it shouldn’t come as a surprise that Allen has been invited to instructors’ parties and celebrations– even weddings. Here’s a picture of her with DJ John Michael at instructor Christine D’Ercole’s wedding to Brian Hicks, which I grabbed from Christine’s IG. 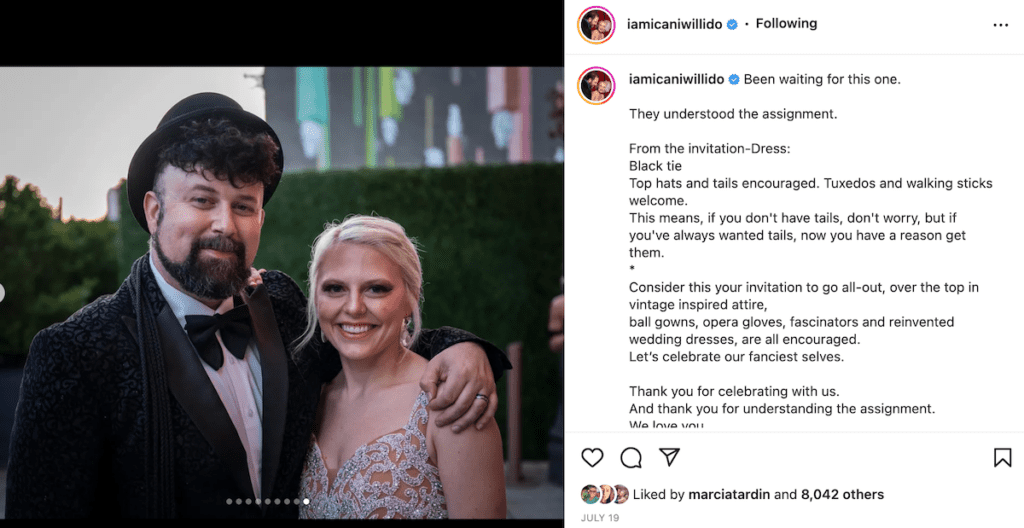 In addition, I can remember watching a Today Show episode years ago and hearing Al Roker talk about Peloton instructor Jess King who had kicked his butt that morning. So, I went into the Peloton app to see if I could find Al to follow him. I did and I did–find him and follow him. His username is WeatherAl.

Finally, in this article about my favorite Peloton Facebook groups, I’d mentioned author Elin Hilderbrand. Not only does she have a Peloton and has included Pelotons in her books but also she does virtual book groups with Peloton fans. Anyway, her username is ElinWriterBrand, and I follow her. Also, I love her books.

Wouldn’t it be fun to know that you’re in class with someone famous? I know that if I get a high five from a Peloton instructor, I freak out. So I can’t imagine what I would do if I sent a high five out to a celebrity–and then they high fived me back.

One person I’m friends with did this when she spotted Joe Jonas on a ride–she high fived him. And you know what? He high fived her back.

Below is a list of celebrity Peloton leaderboard names so you can look for them in class. This is current information based on my recent research.

Since anyone on Peloton is free to change their leaderboard or username at any time, it’s possible these celebrity Peloton screen names might have changed, too. But I feel confident this information is fairly accurate.

Private profiles for celebrities on Peloton

Also, if you do find a celebrity you want to follow on the leaderboard, I would expect that their profiles are going to be private. That means that when you tap “follow” it will say “requested.”

That’s because people with private profiles must approve each and every follower. So don’t be disappointed if they don’t approve of you following them and/or don’t follow you back.

Final thoughts on celebrities on Peloton

Clearly, I’m likely to come across additional celebrities on Peloton. Once I find out what each of these famous people use as a leaderboard name, I’ll be sure to update this post as is appropriate.

Finally, since Peloton instructors themselves have become de facto celebrities, you’ll find a list of their leaderboard names in this article. They are often very generous at sending out high fives during class. I myself have had high fives from Tunde, Rad, Daniel McKenna, Christine and Matt Wilpers.