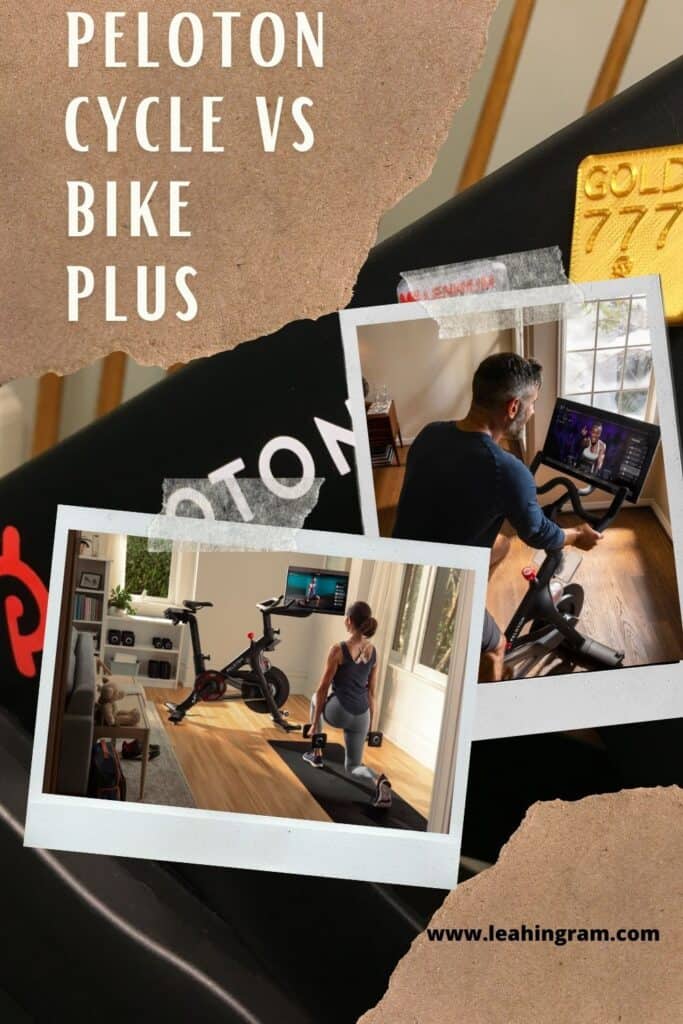 Recently, a cousin texted me, asking questions about the original Peloton cycle versus the Bike Plus. He and his wife were thinking about getting the Peloton but they weren’t sure which one to buy.

Interestingly, my husband and I have been talking about getting a second Peloton bike. And even though we’ve owned our original bike since 2016, we’ve been on the fence about whether to get a second Bike or go with the new Bike Plus–also know with the plus sign (+) after the name.

So the exercise of answering my cousin’s text, with the pros and cons of each, while weighing the cycle versus the bike plus, was good for us to go through, too. And I thought it might be helpful for my readers, too.

Therefore, I’ve put together the following, side-by-side comparisons of the original Peloton cycle versus the Bike Plus, from fees to footprint and more, to see if it’s worth it to get the newer equipment or get a second original bike. If I’ve missed anything or didn’t answer questions, let me know.

Overview of Peloton Cycle versus Bike Plus

Let’s start with just a brief overview of the original Peloton cycle and then the new Bike Plus. As I mentioned we got our Peloton in 2016. At that time lots of people didn’t know what a Peloton bike was. I sure didn’t when my husband surprised me with his decision to get one that year.

However, I’ve since learned that OG or original Peloton owners go back as far as 2014, and this New Jersey Monthly article about instructor Jenn Sherman, Peloton’s first teacher, says the company hired her in 2013.

Fast-forward to 2020 and that’s when Peloton announced the new Bike Plus or Bike+ to its 2.6 million members. You can read this post about its announcement on the Peloton blog called The Output.

Price of Peloton Cycle versus Bike Plus

One of the first differences between the original Peloton cycle and the new Bike Plus was price. Like, you would expect that a new piece of equipment would be more expensive. And technically, the Bike Plus is priced higher than the original cycle.

But here’s what I never expect. Peloton actually lowered the price of the original Peloton and made the Bike Plus the price that people had been paying for the original equipment. So what’s the price? It’s $2,495 for the Bike plus (which is what the original cycle used to be priced at) versus $1,895 for the Peloton cycle.

Even better when Peloton first announced the Bike Plus, they gave people who owned or had just ordered the original Cycle two options. One, they could trade their “old” bikes in for the new one, pay the difference plus get an accessories package for free. Or, two, if you’d purchased an original Cycle within 30 days of the Bike Plus announcement, Peloton would refund the price difference, no questions asked.

This is what happened for my daughter, who bought her Peloton in August. While the bike itself wasn’t delivered until October (and we’ll get into delivery delays in a bit), Peloton automatically refunded her so that her cycle would cost the new price of $1,895.

Finally, over on the Pelotoncycle Reddit, there has been some discussion of rumors of a third price point for bikes–sometime in the future. People believe that at some point, Peloton will begin selling used, refurbished bikes for even cheaper. I mean, what are they going to do with all of the bikes that original owners traded in for the new Bike Plus?

Size and weight of Peloton Cycle versus Bike Plus

There are a few differences in the size and the weight of the cycle versus the Peloton bike plus, but nothing that I think would affect where you put the bike. For example, the footprint of the original cycle and the bike plus are, basically, both four feet by two feet.

Or, if you have a Peloton mat, that’s three feet by six feet, so plenty of room for around both versions. The only thing that might affect where you place the Bike+ is the swivel screen. But I’ll get to that shortly.

The original bike weighs 135 pounds; bike plus weighs 140 pounds. Thank goodness for the Rollerblade-like wheels on the front bottom crossbar, which makes it easier to tip the bike and roll it from one place to another.

Screen comparison of Peloton Cycle versus Bike Plus

For most people I’ve talked to, the new screen on the Bike Plus is a game changer. It’s bigger–nearly 24 inches versus 21.5 inches on the original cycle–and has a better sound system, with forward facing speakers. Additionally, the screen has a privacy cover for the video chatting camera–who video chats during a ride anyway? Me, I have blue tape over the camera on my original cycle.

This screen swivel makes it worth it for people who want to take the Peloton bike bootcamp classes and don’t want to have to crane their necks to see the static screen on the original cycle. This way they turn the screen to the side of their bike and do their workout.

While that sounds convenient, it may not be worth it if you have a narrow space where you have placed your Peloton–maybe your Peloton room is really a Peloton nook. For people tight on space, the swivel screen won’t help you see workouts off the bike if there is no space next to the bike for strength work.

In addition, many Peloton owners have been using a “casting” hack for years to get a more “flexible” screen experience. That is, they “cast” the screen from their bike to a smart TV nearby–often displayed on a wall in front of the bike. This way you’re working with a bigger screen and if you want to do floor work off the bike, you don’t have to go to another room like I do.

I do not have a Smart TV (yet!) so when I want to do floor work, I hook my laptop up to my TV via an HDMI cable, and do my yoga or strength classes that way.

It’s just that the new screen has the ability to move more as it pivots left or right. So even when it’s locked in position, it simply may have more sway. For those who get motion sick, this could be an issue. I know that since I get motion sick, there are some scenic rides I cannot do on my Peloton. It sounds like having the Bike Plus might make it worse.

There are other significant changes from the Peloton cycle to the Bike plus, with regards to the seat, handlebars and resistance knob.

First, some say that the seat on the Bike plus versus the Peloton cycle is softer and better designed. Only time will tell if Bike plus users end up with sore butts, the way cycle users have for years–and the reason I wrote this blog post on how to make the Peloton seat more comfortable.

Second, the ways you adjust the seat position–forward and back, and up and down–has changed. From a crank arm, if you will, to a knob–that should make these adjustments much easier.

One of the biggest complaints about the Peloton handlebars is that they move up and down only, not forward or back like traditional spin bikes. As a member of the Shortie Tribe on Facebook, I can tell you lots of riders have issues reaching the handlebars.

When Peloton redesigned the handlebars for the Bike Plus, they did change the shape so they’re more ergonomic. But they didn’t fix the problem of fore or aft movement. So, if you were hoping for that ability in the newer version of the bike, which would make the higher price worth it, you can forget about that.

The red Peloton resistance knob sits on the bike frame, between the handlebars and the seat. Riders reach down to change how hard or easy their road–or resistance–is.

Changing your resistance on the bike

With the new Bike Plus, you can still manually manipulate the resistance wheel. And you’ll still see your resistance on the screen. But you have the option to turn on “auto follow” so that the bike automatically follows the resistance that the instructors are calling out.

Keep in mind this feature is available for on demand classes only. With live classes those metrics are happening in real time. The class has to be programmed after the fact to allow for auto resistance to be enabled.

People living in an Apple ecosystem are raving about the Bike Plus’ Apple Watch integration through the Gym Kit. All you need to do is bring your Watch close to the Bike Plus smart screen, and everything from your ride will be synced.

Plenty of people using the original Cycle also sync their workouts on their Apple Watches, but they have to do this manually. So, there is this added convenience of the Bike Plus being “smarter” that way.

FYI, if you’re in the market for a heart rate monitor, I love my Scosche Ant+ HRM, which is connects by Bluetooth and is 100% compatible with Peloton. If you use this link to shop and use my code SCOSCHE25 at checkout, you can save 25%.

Delivery time for Peloton cycle versus Bike Plus

I heard from Peloton that delivery for both the original cycle and the Bike Plus are running four to six weeks from the time you order. That’s the official word.

However, the word in various Facebook groups is that it is much longer than that. For example, friends who traded in their original bikes are waiting for two months or longer to get the Bike Plus. This Fox Business news article confirms the waits and the frustrations.

I know demand is high now, what with people wanting to work out at home versus at the gym. However, I can only imagine how much higher the demand will get with New Year’s resolutions.

Overall thoughts on the Peloton cycle versus the Bike Plus

So, after writing this thorough comparison, with all of the pros and cons of each piece of equipment, here’s where I am about getting a second bike: I’m going to wait a bit. I’m still on the fence about the Bike Plus versus the original cycle.

And I surely don’t want to wait two months to get a bike. If you’re in the same boat that I am, please continue reading for Peloton hacks you can try at home. These are designed for even if you don’t have a bike or Tread.

Peloton hacks to try at home

You know, it is possible to get the Peloton experience without the Peloton price tag. One Peloton hack is to use the digital app with other equipment. It’s what I do with my NordicTrack treadmill and the Peloton Tread classes.

I may not have the “jump” button that the Tread does. However, I can easily increase or decrease my speed or elevation with the touch of a button. Here is my review of the Peloton digital app.

Additionally, there are plenty of Peloton riders who do not have the Peloton bike. This article on Peloton alternatives offers, well, alternatives to the cycle, if you don’t want to wait two months to get one. I’ve shared some of those alternatives below, too. 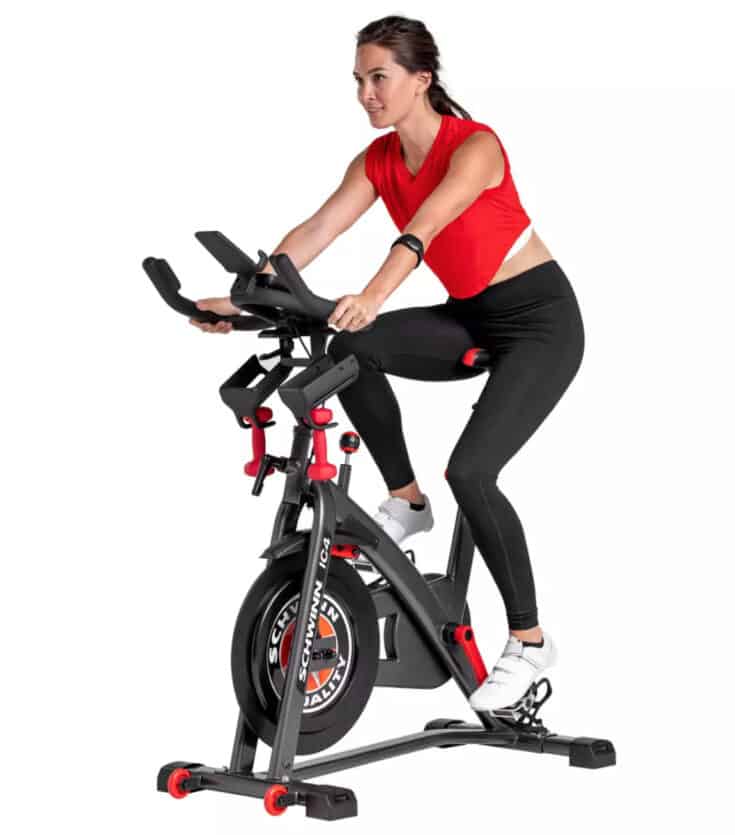 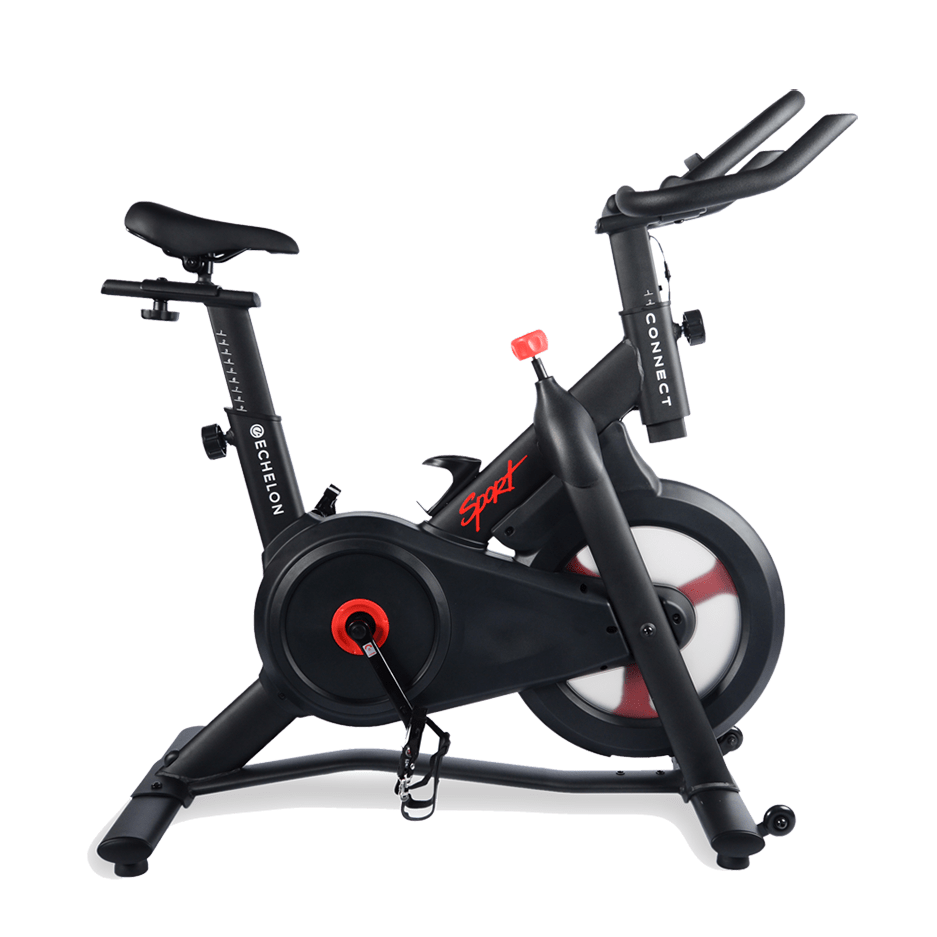 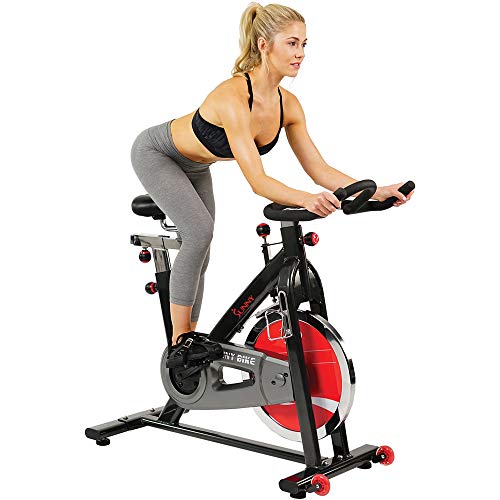 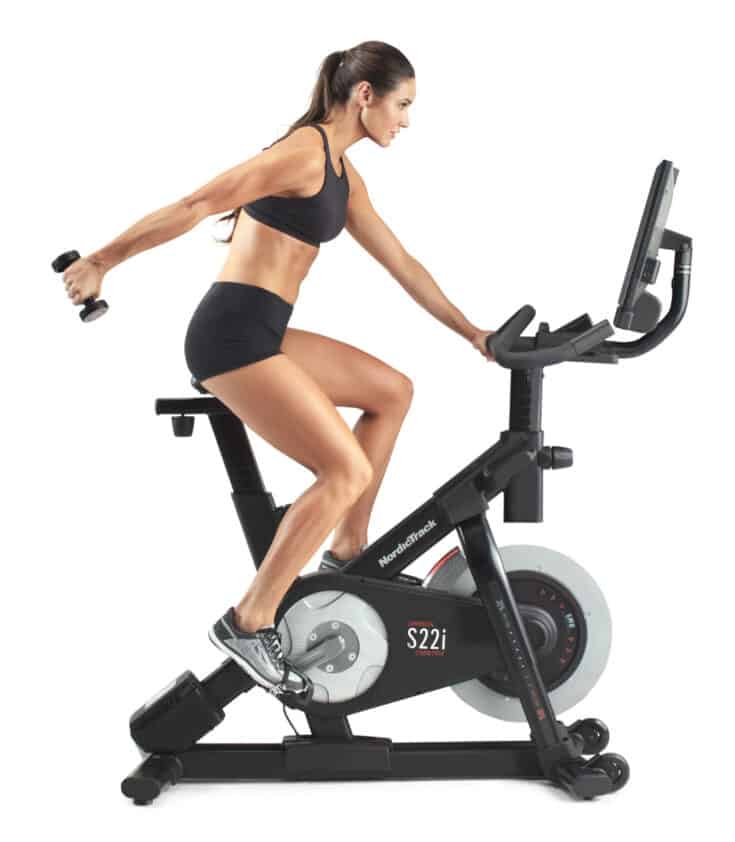 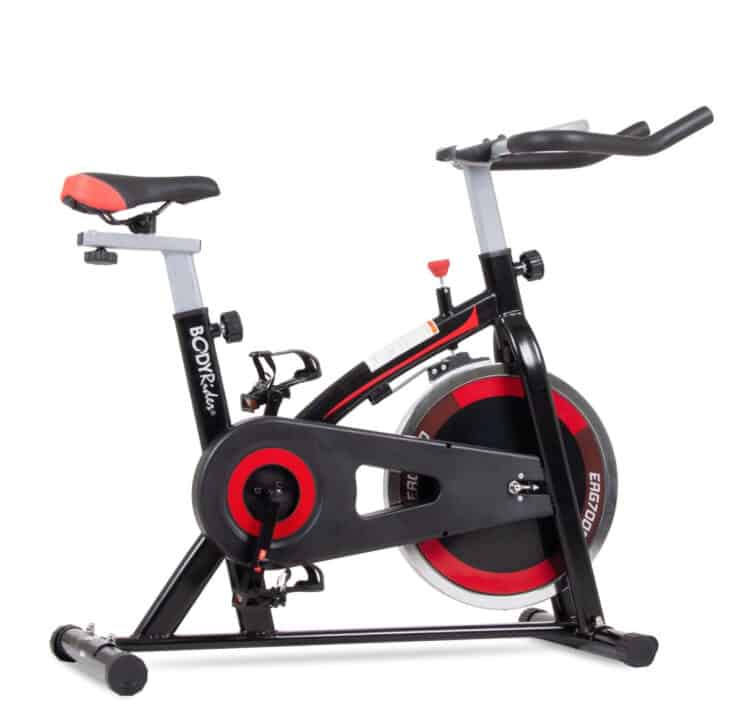 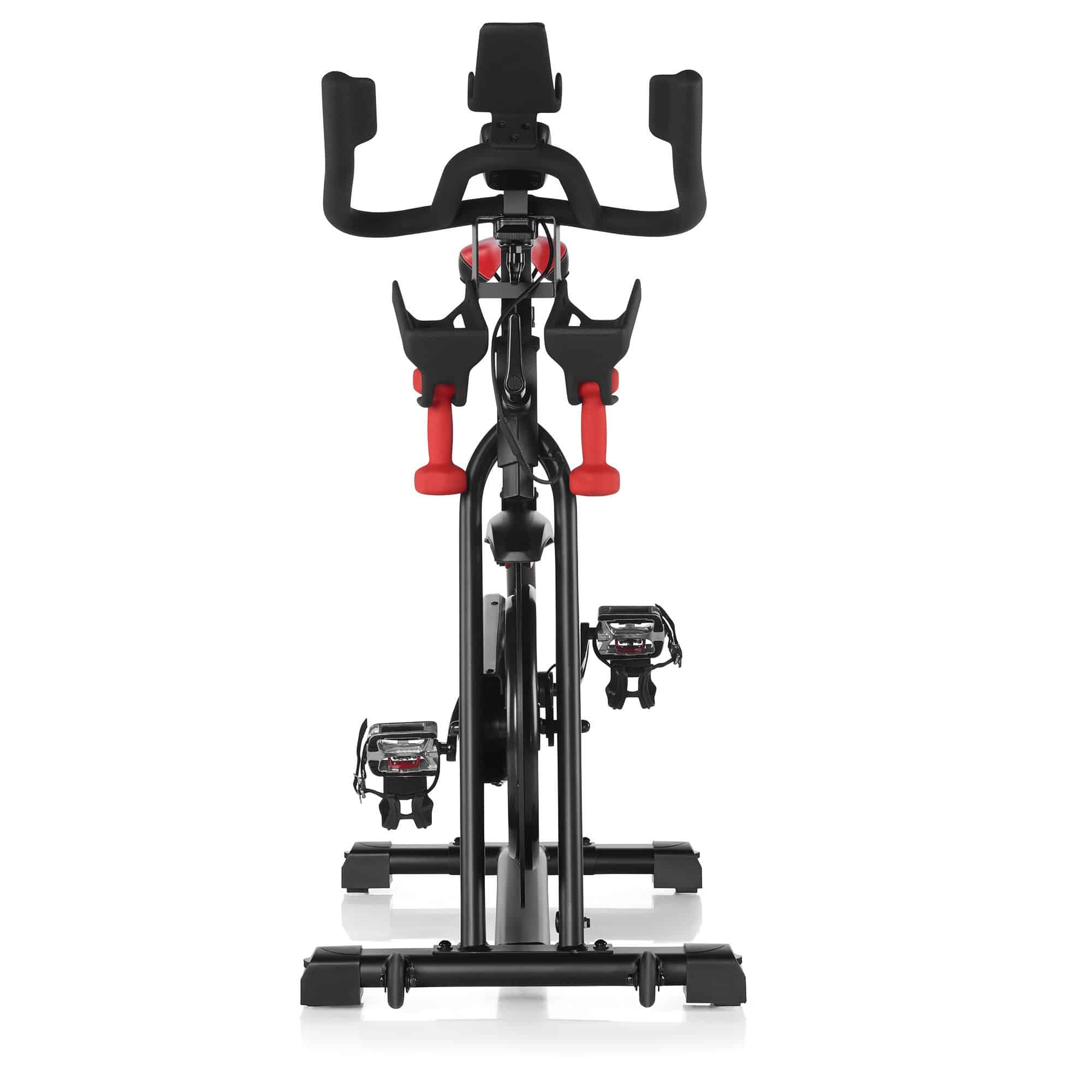