I was surprised to discover that there weren’t more Peloton hotel locations in New Jersey. Some of the most populated parts of New Jersey are right outside New York City. And, as you know, NYC is where Peloton is headquartered.

In addition, with how popular the Jersey Shore is during the summer months, I thought for sure I’d find more lodging there with Pelotons. Nope. There aren’t even a lot of vacation rentals at the Shore with bikes either. Hello, untapped market!

However, despite my disappointment in finding fewer New Jersey hotels with Pelotons than I’d expected, I still soldiered on with this roundup. So, I tracked down as many locations as I could. In the end I found more than a dozen Peloton hotels, which is way more than I had for New Jersey in this original Peloton hotel finder post.

Below you’ll find an alphabetical list, by town or city, of places in New Jersey where you can find a hotel with a Peloton. Then, if there is more than one hotel in a place, you’ll find the hotels listed in alphabetical order as well.

It appears the Asbury Ocean Club Hotel has at least two Peloton bikes in the fitness center. That’s based on the photo, below, from the hotel’s Instagram feed. However, I couldn’t find any additional information about whether there are bikes in room here, too. 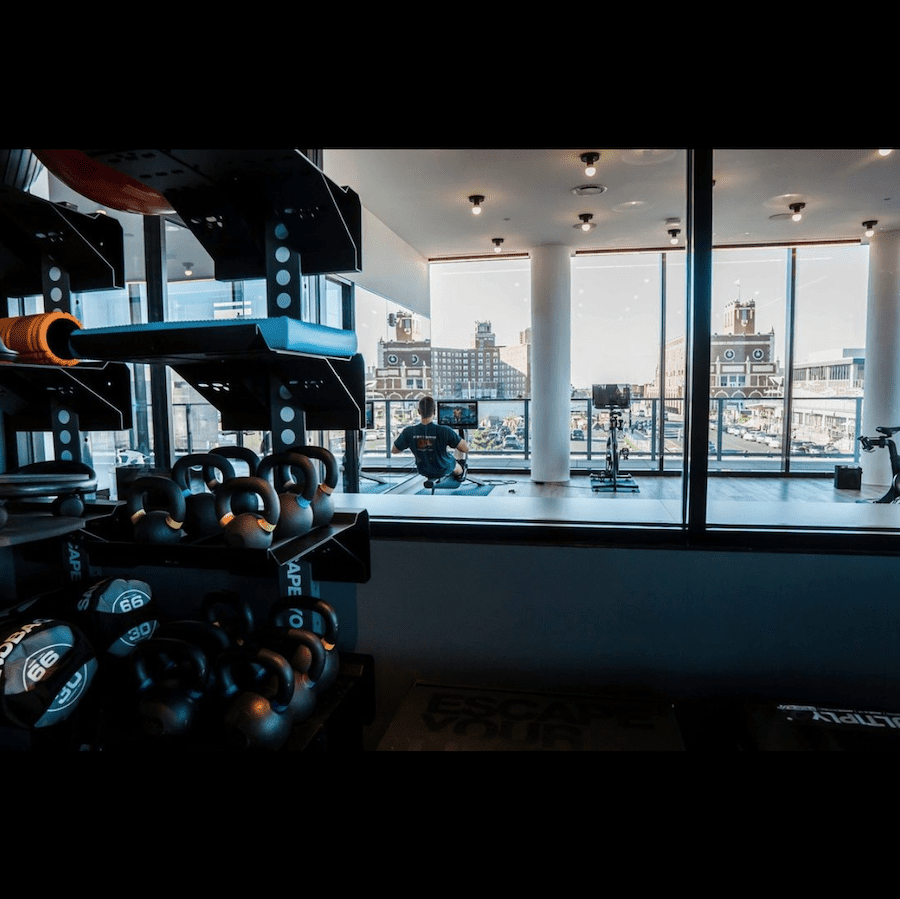 The information on whether or not the Delta Hotels Basking Ridge has a Peloton bike in its fitness center is conflicting. TripAdvisor reviews says yes. The hotel website doesn’t mention one.

The photo below, which I grabbed from the AC Hotel Bridgewater website, shows the two Peloton bikes in the fitness center. 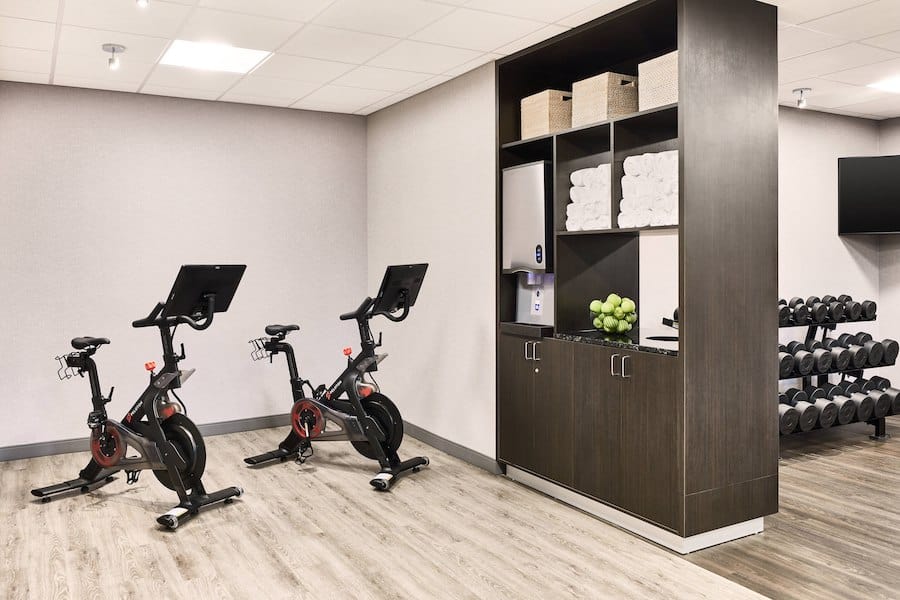 The Bridgewater Marriott has Peloton bikes. In fact, a friend who stayed there recently said there are two bikes and they are brand new. Use this link to book directly on the Marriott site.

The TownePlace Suites by Marriott Bridgewater Branchburg is a fairly new hotel in Central Jersey. I love that it has a Peloton bike in the hotel gym. Also, the hotel has free breakfast.

Just opened in 2021, near The Meadowlands, The SpringHill Suites East Rutherford Meadowlands/Carlstadt has one Peloton bike in its fitness center.

The Residence Inn New Brunswick Tower Center Blvd is one of the hotels close to Rutgers University. It promotes its one Peloton bike right on the hotel website homepage.

This is pretty much the only airport hotel near Newark with a Peloton. So, even though the website for the Renaissance Newark Airport Hotel doesn’t mention Pelotons there, I’ve confirmed that there are two bikes in fitness center, which was reovated in 2020.

A friend recently reported that the Crystal Springs Resort, in northwest New Jersey, has two Peloton bikes on property. Both have shoe cages on the pedals.

This is a brand-new hotel in Hamilton, NJ. Even though the website for the Courtyby Marriott Hamilton doesn’t show the Peloton there, a local newspaper article highlights this fitness amenity.

The W Hotel in Hoboken, New Jersey, just across the Hudson River from New York City, has two Peloton bikes in the hotel gym. At one time there was one guestroom with a Peloton bike in it a well. However, I’ve not been able to confirm if that options still exists.

There is one Peloton bike in the Westin Workout Studio aka the hotel gym at The Westin Jersey City Newport. Unfortunately, this is not one of the Westin locations with Workout guestrooms that come with a Peloton in it.

Even though the Hilton Garden Inn Princeton Lawrenceville is located in Lawrenceville, the Princeton in its name signifies the proximity to Princeton University. Unfortunately, the hotel hasn’t updated photos of its fitness center to reflect the Peloton bike there.

Speaking of bikes, you can take your ride outside, if you’d like. This hotel lets guests borrow them for free.

Located right in Pier Village in Long Branch, the Wave Resort appears to have one Peloton bike in the hotel gym.

The MC Hotel, a boutique property that’s part of the Marriott Autograph Collection, includes mention of the Peloton bike on the hotel fitness page. Unfortunately, it is spelled Peleton. But you get the idea.

Anyway, some people in the Peloton community have reported the hotel has removed the bike. So, check first before booking.

Last year, The George hotel shared on its Instagram account a picture of the Peloton bike and the Peloton Tread in its fitness room. Its listing on Expedia includes that same image. 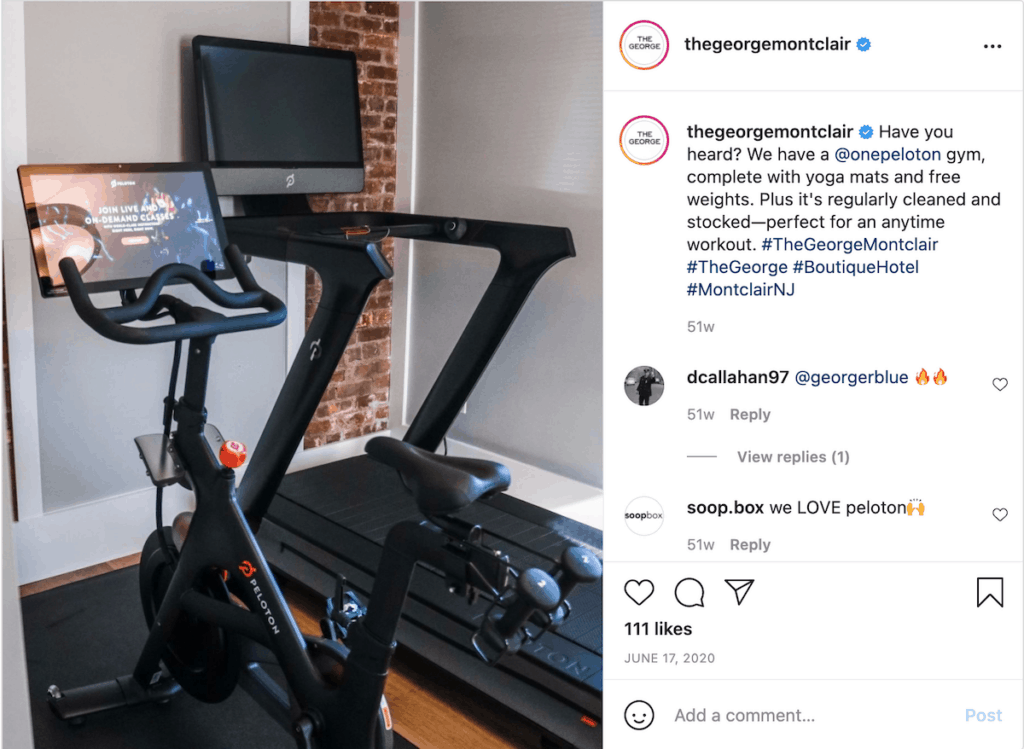 I was surprised to learn that the Best Western Plus Morristown Inn has a Peloton bike. However, the hotel recently renovated its fitness center and added the Peloton cycle. Nice!

The newly renovated Somerset Hills Hotel NJ is part of the Tapestry Collection by Hilton. I’ve confirmed that there are two Peloton cycles in the fitness center.

One of the hotels closest to Teterboro Airport, the Element New York Wood Ridge hotel calls its hotel gym Motion Fitness Center. It has two Peloton bikes, as shown, below. 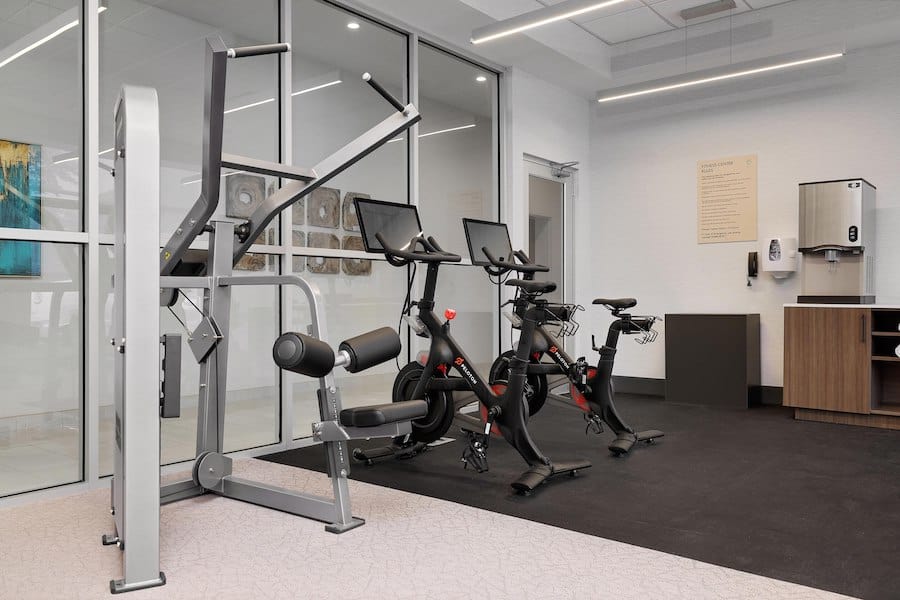 You may notice that I have fewer hotels listed in New Jersey than other, similar sites. That’s because I fact-checked each location. Therefore, you can feel confident that I’m providing the most up-t0-date information on Pelotons in hotels. And, unfortunately, there are not a lot of hotel locations in New Jersey with Pelotons.

However, if I’ve missed a New Jersey location, let me know. That is if you work at one, represent one or have stayed at one such hotel, please post a comment and let me know. I’ll be sure to update this post accordingly.