I decided to write this Tonal hotel finder and Mirror workout locator article for a couple of reasons. One, many of the hotel gyms listed in my hotels with Peloton bikes also have Tonal machines or Mirror by Lululemon workout stations. Therefore, I figured my blog readers would like to know about all of their streaming fitness options when traveling.

Two, my husband and I have talked about upgrading our home gym to include either a Tonal or a Mirror by Lululemon–to go along with our Peloton bikes. (I’m not interested in the Peloton Guide; it reminds me of 1990s Wii Fit.)

So, I’m thinking that one of the best ways to try out the Tonal fitness trainer or a Mirror would be to find a hotel when we travel that has one. In fact, there are hotels, I’ve learned, not only with Tonal machines in the gym but also in private rooms–much like the hotels with Peloton bikes in the room. 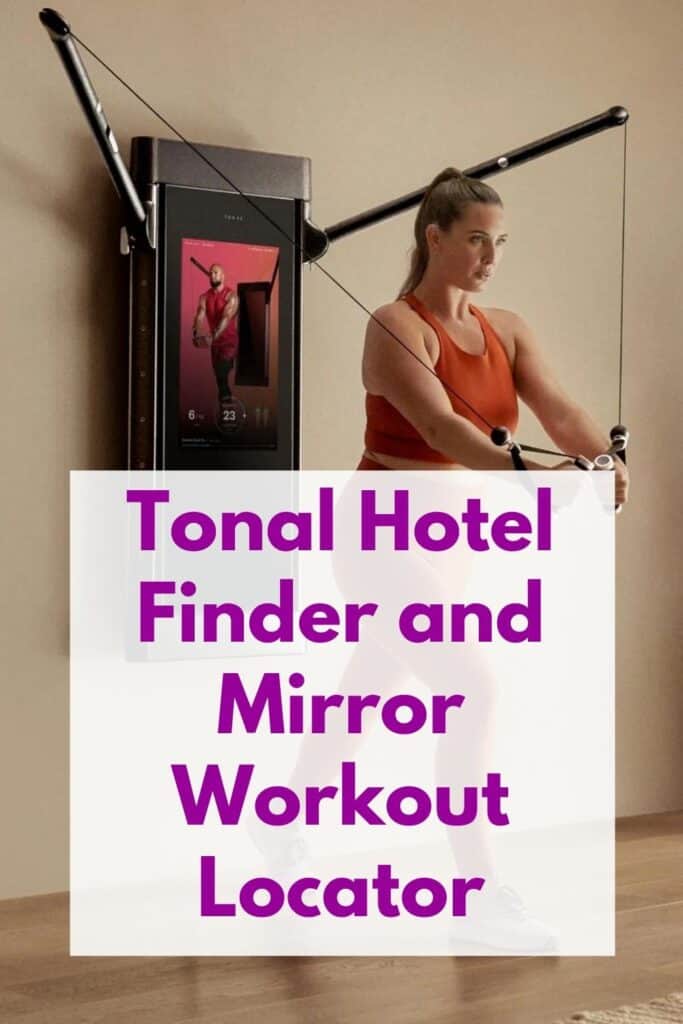 Finally, I do realize that you can try out Tonal at certain Nordstrom stores. So, the next time I’m at a Nordstrom, I’d love to get a Tonal demo.

Unfortunately, the Nordstrom in Pittsburgh near where I live does not have a Tonal store located inside it. In fact, you can get a Tonal demo at only select Nordstrom stores. 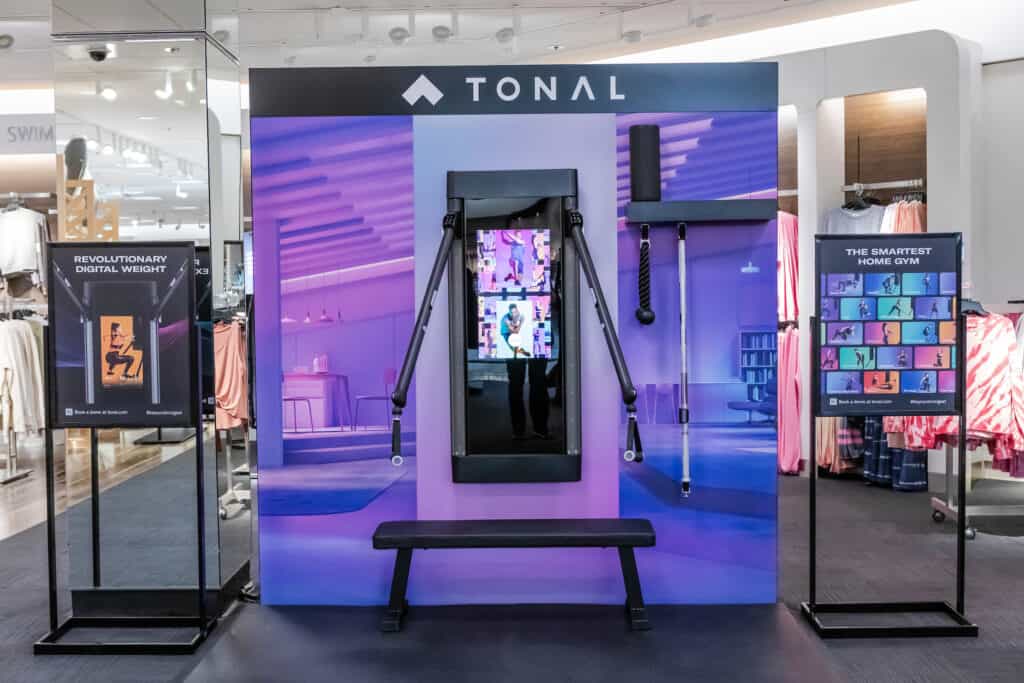 In researching this article, I came across just a few hotel brands that seem to be committed to adding these smart workout gyms to their hotel rooms and fitness center. Mostly I found them connected to Tonal, not the Mirror.

Next, there are the Proper Hotels in California and Texas. I found a handful of them (primarily in California) with at least one Tonal in the fitness center.

Finally, Design Hotels, part of Marriott Bonvoy are adding Tonal smart fitness trainers to rooms and gyms. Again, many of these seem to be located in California, but I wouldn’t be surprised to see them showing up in Design Hotels elsewhere in the US in the next year or so. 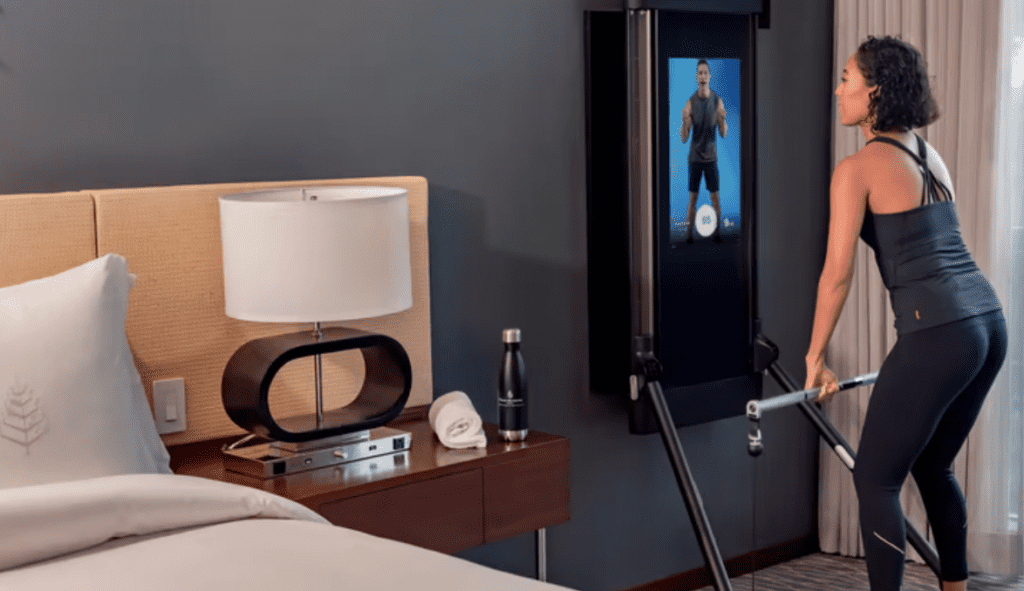 Below is an alphabetical list of hotels with either a Tonal or Mirror. Many also have a Peloton bike.

In this guide, I’m helping you find hotels nationwide that offer these smart gyms in their hotel gyms or in private rooms i.e. guestrooms. So, the list here is alphabetical by geography, and then alphabetical by city or town. Finally, if there is more than one hotel in a single location, you’ll find hotels listed in, you guessed it, alphabetical order.

L’Auberge de Sedona has a well-equipped hotel gym, with The Mirror as well as a Hydrow rowing machine and Peloton bikes.

This article on hotels with Hydrow rowers can help you find properties nationwide with this high-tech rowing machine.

You’ll find that the Andaz Scottsdale Resort & Bungalows is well-stocked with Tonal options. One, there are six guest rooms that you can book a stay in with Tonals there. Two, you can use the one Tonal in the fitness center. 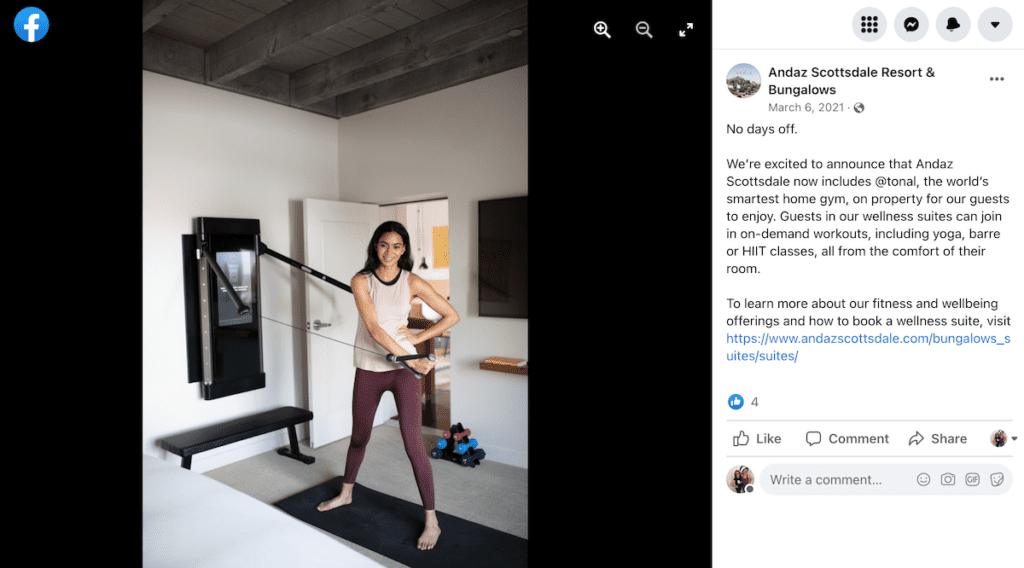 The hotel gym at the JW Marriott, Anaheim Resort has a Tonal. FYI, it also has two Peloton bikes.

Not only does the Avalon Hotel Beverly Hills have Peloton bikes but also it has a Tonal strength and fitness trainers.

When you book one of The Four Seasons Hotel Silicon Valley’s fitness suites, you’ll find a Tonal already installed in the guestroom. They’re calling these the Tonal Capsules.

In addition to the three guest rooms with these Tonal Capsules, you’ll find four Tonals that you can reserve to use in a private fitness studio at the hotel.

Located right on the Pacific Coast Highway, the Kimpton Shorebreak Resort has The Mirror plus a Peloton bike.

The Downtown LA Proper Hotel has one Tonal in the fitness center gym.

You’ll find one Tonal in the Hotel June gym.

At The Ameswell Hotel in Mountain View, you’ll have access to The Mirror by Lululemon when you book a Wellness Room.

There is one Tonal machine in the fitness center gym at the Stanly Resort.

You’ll find one Tonal in the gym at the Avalon Hotel & Bungalows.

Look into the Sweat Suite Package at the Kimpton Sawyer Hotel. Why? Because it lets you book a suite with a Mirror or Peloton right in the room.

There is one Tonal in the fitness center at the San Francisco Proper Hotel.

The Santa Monica Proper Hotel is a smart gym and streaming fitness lovers perfect hotel. In addition to the two Tonal machines, you’ll find six Peloton cycles and one Peloton Tread in the fitness center.

There are two Tonal machines in the gym at The Grand Hyatt Vail.

You’ll want to book a room on one of The Stamford hotel’s two “wellness” floors. That’s because those guest rooms come with the Mirror workout equipment right in the room.

There is one Tonal in the fitness center at The Henderson Beach Resort. The hotel is also included in this article about Florida Peloton hotels.

You’ll find one guest room you can book at the Hyatt Regency Miami that comes with a Tonal.

You’ll find one guest room at the Four Seasons Resort Lanai with a Tonal in it.

You’ve got two options for using the Tonal at the Grand Wailea Maui hotel. One, you’ll find two Tonals in the hotel gym. Or, two, you can book a private studio suite to use the Tonal there.

The Ritz-Carlton, Kapalua gym has three Tonal machines as well as a Peloton.

You can book one of the three guest rooms at The Pendry Chicago that have a Tonal in them. There are also two guest suites at this hotel with Peloton bikes in them. You can read more about them in this article about Chicago Peloton hotels.

You’ll find one Tonal in the Peninsula Hotel gym.

There is one Tonal in the fitness center at the Hyatt Grand Central in NYC.

The Residence Inn by Marriott Downtown, near the World Trade Center, has all of the connected fitness equipment you could ever want in a hotel gym. Here, you’ll find Peloton bikes, a Peloton Tread, plus the Mirror and Tonal workout equipment.

The Dossier Provenance hotel has a Mirror in the hotel gym plus a Peloton.

I grabbed the image, below, from the Woodlark Hotel’s Expedia page. It shows the Peloton bike and Mirror in the fitness center. 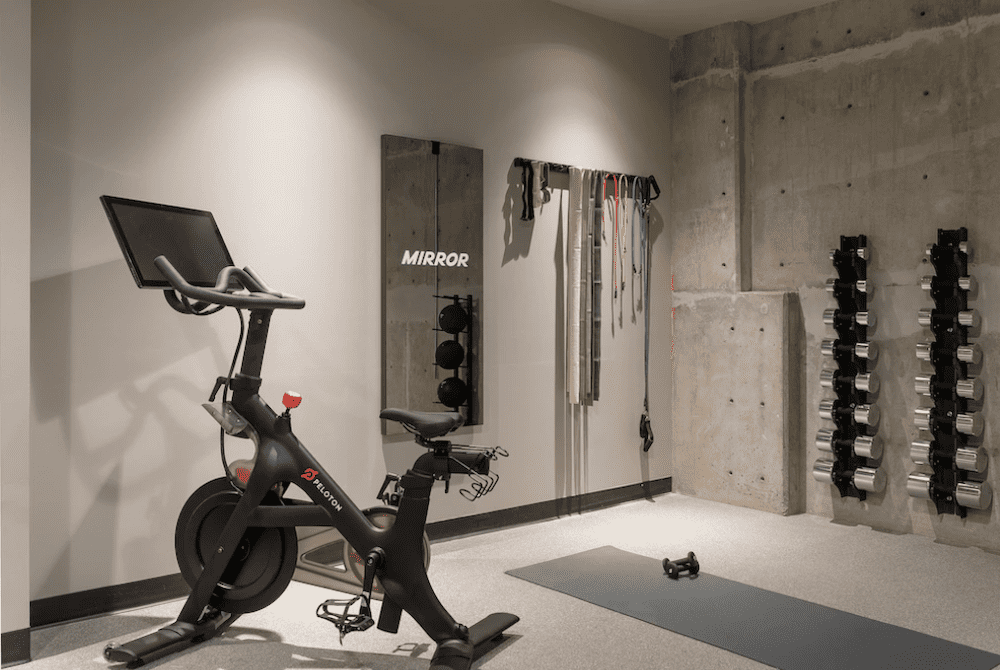 You’ll find one Tonal in the fitness center at the Austin Proper Hotel.

The Four Seasons Hotel Houston offers a private workout room for guests who book the Accessible Penthouse Suite. It comes with a Mirror by Lululemon and a Peloton bike.

The Salamander Resort and Spa

You have two options for working out with the Tonal at The Salamander Resort and Spa. One, you can book a guest room with a Tonal in it. There are two such rooms available.

Or, two, you can use the Tonal in the fitness center. FYI, the Salamander also appears in this article about Virginia hotels with Peloton bikes. 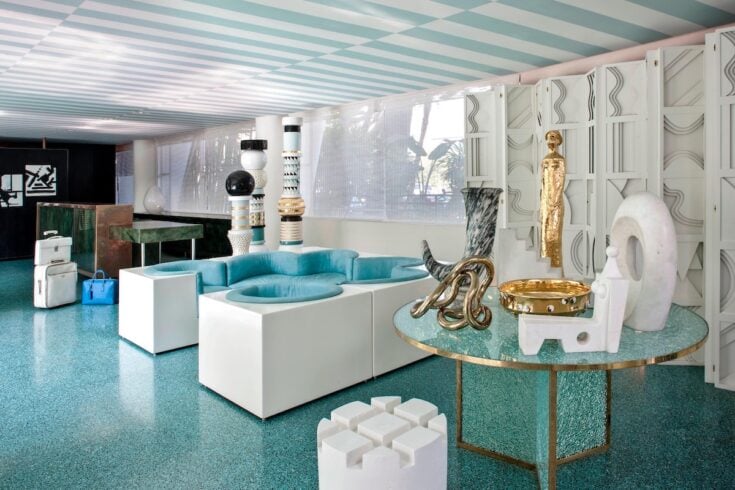 As with so many of these hotel articles that I’ve written, this Tonal hotel finder and guide to hotels with Mirror workouts is a work in progress. As I come across more properties with these smart gym accessories, I’ll be sure to add them to this article.

At the same time I hope that if you come across this article and have information that I have not included, you’ll reach out and let me know. This includes hotel guests that have used a Tonal, or companies that represent the hotels themselves.