A few years ago, I pined to stay at one of the Washington DC hotels with Peloton bikes. You see, I was there to attend a conference, and our hotel, near Georgetown, did not have Pelotons in the gym. However, the hotel diagonally across the street did.

The hotel gym was on the second floor, and the Pelotons were right in the window. Every time I walked outside, I could see my fellow Peloton enthusiasts getting a ride in on one of the bikes.

I seriously considered sneaking into the hotel, just to ride the bike. However, I never did because I’m a rule follower and terrified of getting in trouble. Alas, should that conference go to DC again in the future–and be centered at the same hotel–I’m booking the hotel with the Peloton cycles.

Why write about Washington DC Hotels with Peloton Bikes

Recently, I’ve been writing separate blog posts about hotels with Peloton bikes. All of these posts–including this one–grew out of my first Peloton hotels piece. I published that post originally in 2019.

Since that time, it grew to be a monster. I mean, so many hotels are getting Pelotons in their hotel gyms or right in the rooms. The more I updated it, the longer it got. By the time I decided to divide the information up by location, that hotel blog post was 14,000+ words long. That’s too long.

So, like the posts I’ve since written about hotels with Pelotons in Atlanta, Chicago and Las Vegas (among other locations), it was time to cover Washington, DC. It’s important to note that I’m covering hotels in the District only.

Hotels in the greater Washington DC area will appear in their respective state posts. So, look for Bethesda hotels in a Maryland post, and Arlington hotels in a Virginia post.

With regards to this list of hotels in Washington DC with Pelotons, everything appears in alphabetical order. I could have broken them out by neighborhood. However, I’m not as familiar with DC neighborhoods as I am with New York City (where I’m from) neighborhoods. So rather than get things wrong, I’m just going to leave neighborhood headings out completely.

I spied one Peloton cycle in the gym at the AC Hotel Washington DC Downtown.

I’ve seen social media posts from the Cambria Hotel Washington DC Capitol Riverfront that mention how the hotel gym has a Peloton and you can keep your Peloton streak going when you stay there.

The Capitol Hill Hotel has at least two Peloton bikes in the hotel gym.

The Churchill Hotel Washington DC, near Embassy Row, refers to the Pelotons in the fitness center in the plural. And, sure enough, when you get to the gym, you’ll find two Peloton cycles there. 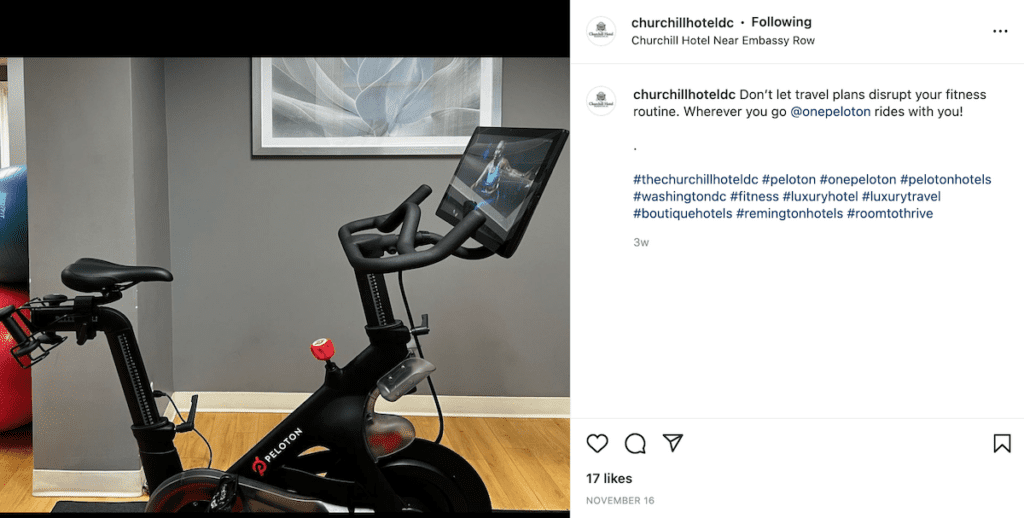 Most Club Quarters hotels have Pelotons in the fitness center. The CQ Hotel Washington DC is no different. There is one Peloton bike in the gym.

The Darcy positions itself as an LGBTQ+ hotel. In addition, it has two Peloton bikes, so say these TripAdvisor reviews.

I’ve heard that the hotel gym at the Embassy Suites by Hilton Washington DC Georgetown is quite small. However, it does come with a Peloton bike.

In a Facebook page, shown, below, the Four Seasons Hotel Washington DC advertised the ability to get an in-room Peloton bike. Nice! 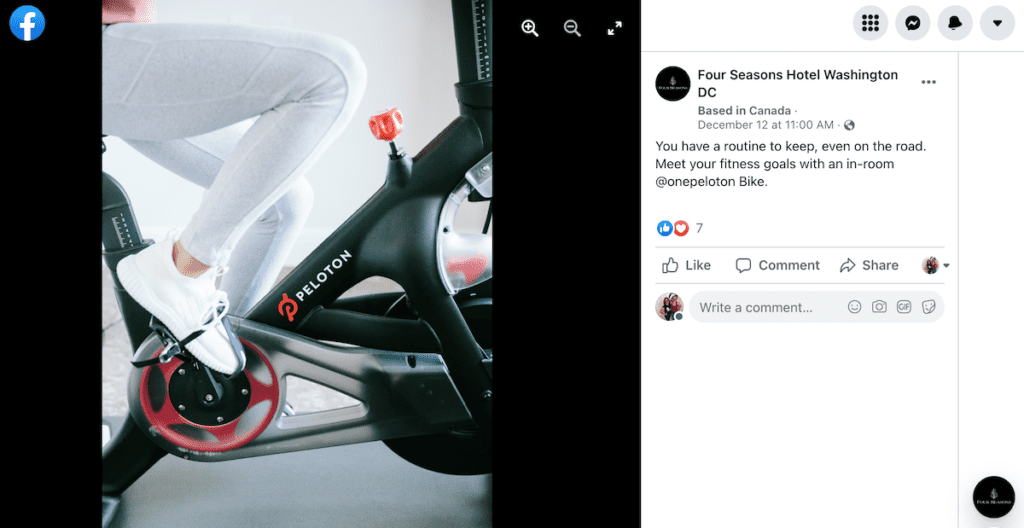 You can book a private Peloton for in your hotel room at The Graham Georgetown. And, according to the Instagram post, shown below, you can add on other workout accessories to your package. So, you can have a yoga studio and private workout space in your room. 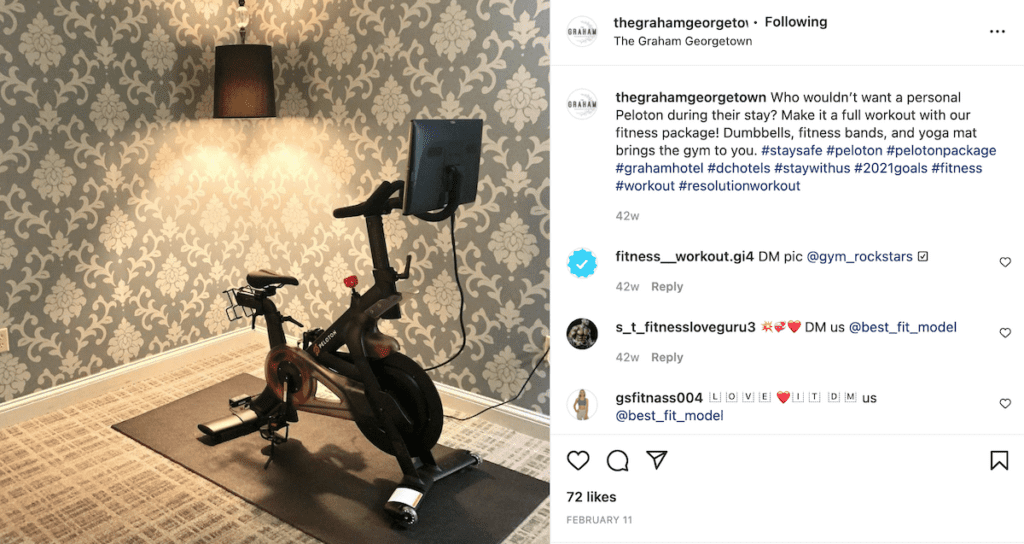 I’d originally included this property, with a mention how the 24-hour fitness center at the Hamilton Hotel near The White House features Peloton cycles. Then, the hotel reached out to me to let me know about this Peloton “upgrade” that’s available.

I found the image, below, on the hotel’s Instagram, that mentions a Suite Ride pacakge, too. 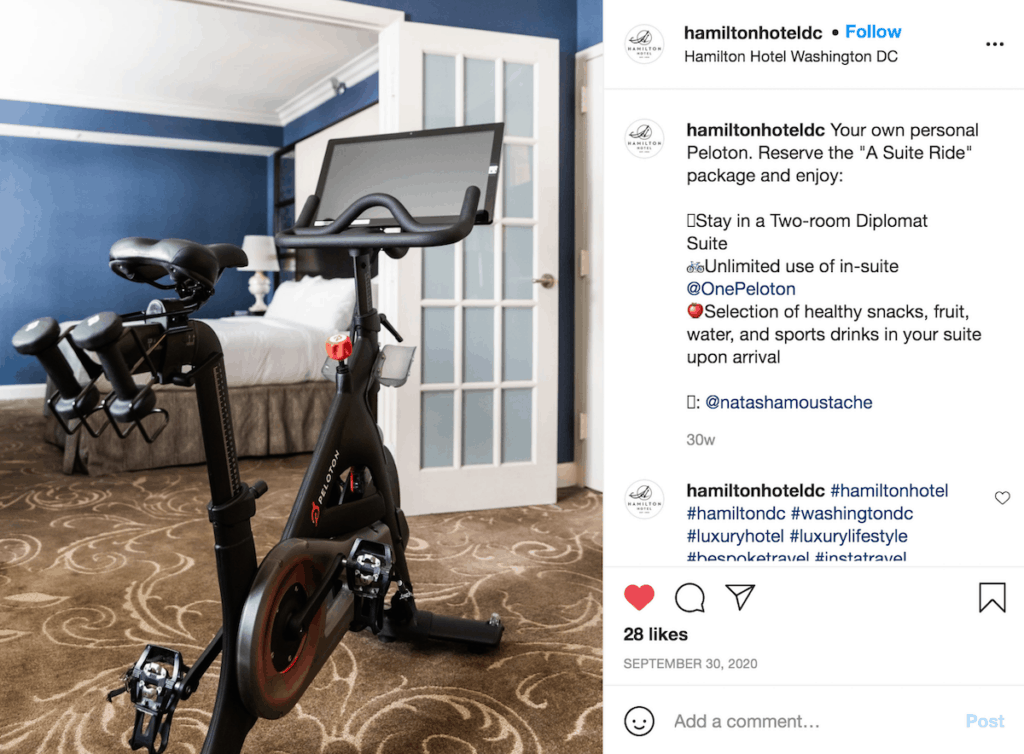 Located in Washington, DC’s Dupont Circle neighborhood, the Hotel Madera has one Peloton bike in the gym.

Travelers have reported that the Intercontinental Washington D.C.–The Wharf hotel recently replaced its two older Peloton bikes with two newer ones. Therefore, it continues to be a Peloton hotel.

There is one Peloton bike in the gym and fitness center at the Kimpton George Hotel, as highlighted in the Instagram post, below. 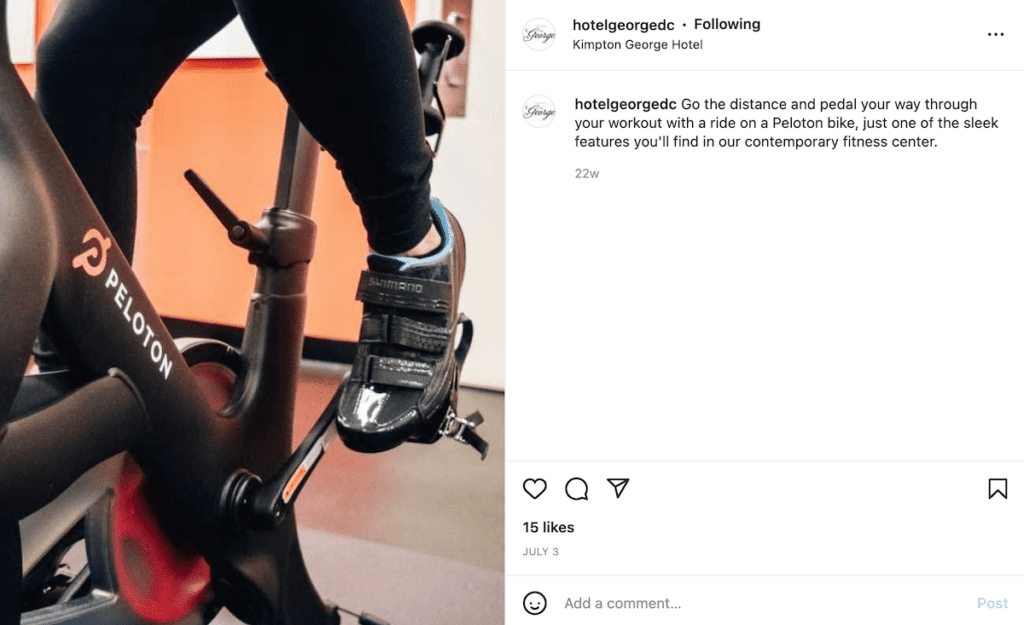 The newly opened Lyle DC hotel in Dupont Circle has one Peloton cycle in the gym.

Located in the Southwest Watefront area of Washington DC, the Mandarin Oriental has a single Peloton bike in the hotel gym.

The Mayflower Hotel website doesn’t mention having a Peloton bike. However, these TripAdvisor reviews do.

FYI, if you’re looking for a Peloton hotel on Connecticut Avenue, The Mayflower is it. The Courtyard by Marriott nearby, which is listed on other sites as being a Peloton hotel, is no longer.

There are two Peloton bikes at the Melrose Georgetown Hotel.

I knew that the Park Hyatt Washington DC had at least one Peloton bike in the hotel gym. A Facebook post from the property had shared that info.

Then, I discovered the Instagram post shown, below. It confirms that there are two Peloton cycles at the hotel. You’ll find them in the Guest House fitness center.

There are at least two Peloton cycles in the Riggs Washington DC hotel gym.

You can ride one of two Peloton bikes in the hotel gym at the Ritz-Carlton Georgetown Washington DC.

You’ll find the Rosewood Washington DC hotel gym on the roof. The hotel calls it open air, meaning there is good air circulation to help you exercise more safely. However, more importantly for the Peloton set, there is a Peloton bike in the fitness center, shown, below. 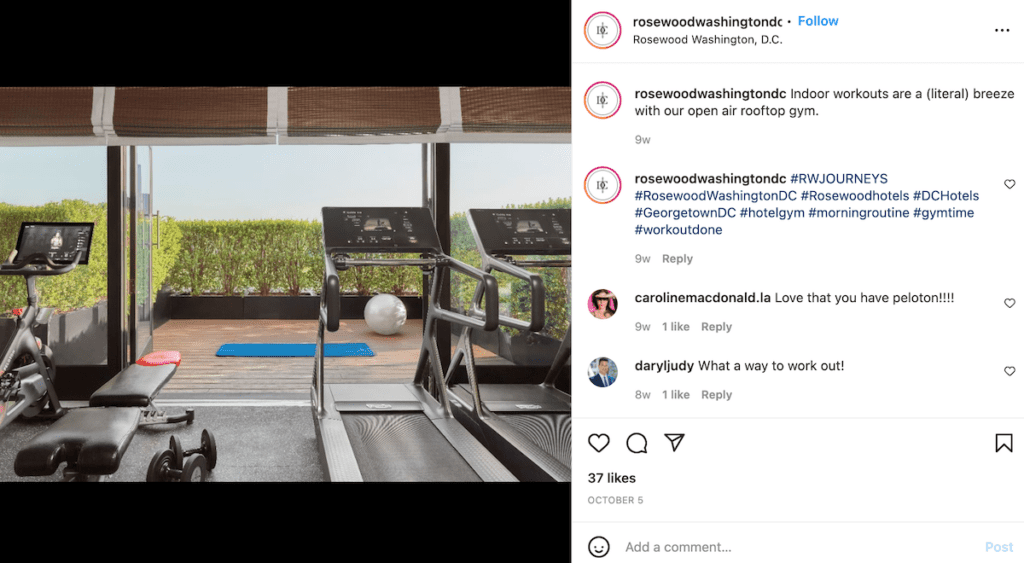 The hotel fitness center at the St. Gregory Hotel has mutliple Peloton bikes. In fact, based on the Instagram image I’m sharing, below, it appears there are at least two cycles at this Washington DC hotel. 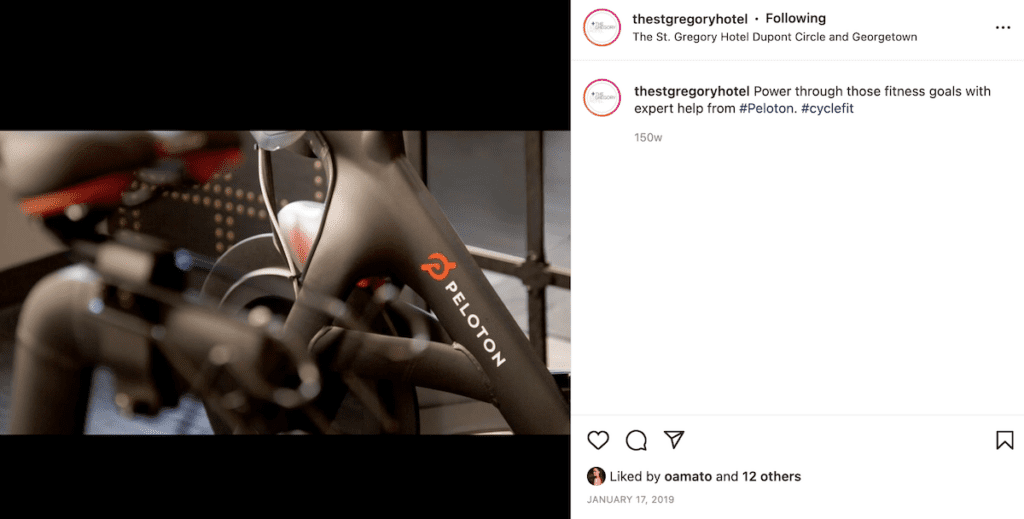 The Viceroy Washington DC hotel lists one Peloton bike in its gym. It also explains how to book time to ride:

“Access to the fitness center can be arranged through the front desk and capacity will be limited to one guest at a time, for a maximum of 45 minutes.”

The Westin Georgetown shared the post, below, on its Facebook page, when the DC hotel got its Peloton bikes. Unfortunately, this is not a Westin Peloton hotel with bikes in guestrooms. The two bikes are in the fitness center. 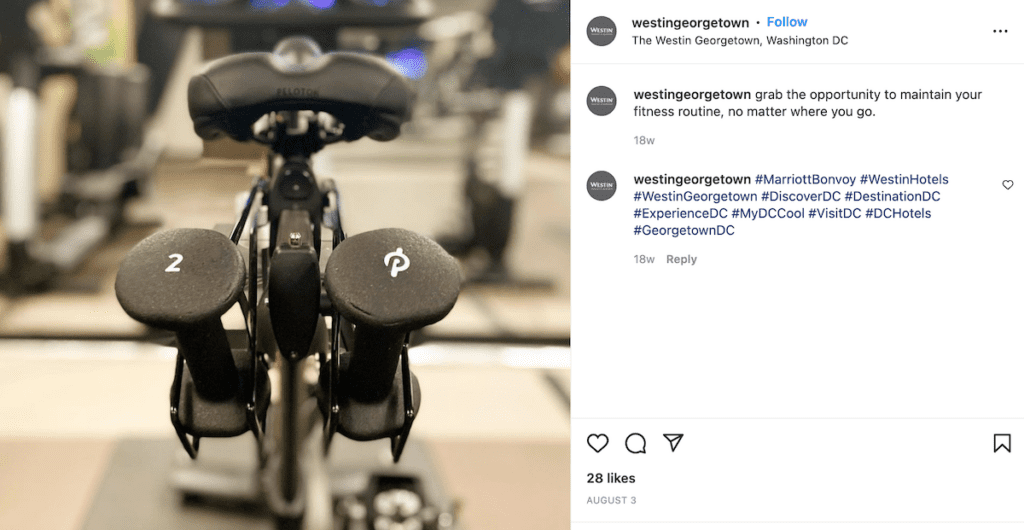 The Westin Washington, D.C. City Center says it has Peloton bikes in the hotel gym. However, there are no pictures to confirm how many are there or where in the fitness center they are. Also, unfortunately this does not seem to be a Westin with Peloton Workout Rooms aka in-room Pelotons.

Located in Dupont Circle, I spotted two Peloton bikes in the Yours Truly Hotel gym. FYI, the hotel is located near these Washington, DC colleges and universities:

This blog post can provide more info on hotels near college campuses.

Finally, according to the Instagram post I’m sharing, below, you can have a Peloton cycle delivered to your room when you stay at the Yours Truly Hotel. 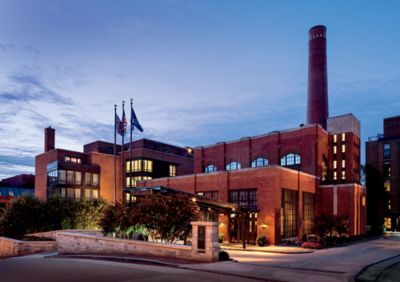 These Peloton hotels articles are works in progress. That is, I’m continually updating them based on the best information I can find at the time. I’m open to suggestions, corrections and additions.

So, if I’ve missed a hotel where you’ve stayed and were able to use a Peloton, let me know. If you work at or represent a hotel not included–and it has a Peloton–let me know. And if I got something wrong, let me know. I look forward to hearing from you.