When thinking about Hawaii hotels with Peloton bikes, I love to tell the story of my friend Stephanie. A few years ago, she was visiting Maui with her then-boyfriend (now fiance). While there she took her very first ride on a Peloton bike in the hotel gym.

She was so blown away with the experience that, while in the Hawaii airport to fly home, she ordered a Peloton bike. The rest, they say, is history.

Funny side note to this story: Stephanie was in Hawaii because she wanted to climb aka ride a bike up Mt. Haleakala. You see, she is an accomplished cyclist outdoors. However, she had no idea that Peloton instructor Christine D’Ercole also climbed Mt. Haleakala during a visit to Hawaii. Then, Christine turned that climb into a series of rides on the Peloton. I’ll have to ask Stephanie if she “rode” Mt. Haleakala again at home on her Peloton via Christine’s climb classes.

As far as the number of Hawaii hotels with Peloton bikes, they aren’t as numerous as other states. And that’s not surprising given that Hawaii is such a small state–from a geography and population standpoint.

For example, Hawaii has 1/20 the population of New York City. Not New York State. New York City. Also, because of the distance from the mainland, I imagine it is more challenging to get Peloton bikes to Hawaii hotels than it is to New York hotels.

Speaking of New York, here is my blog post about New York hotels with Peloton bikes.

Where in Hawaii those Peloton hotels are

In case you didn’t know, there are eight main islands that make up the state of Hawaii. Those eight islands are:

However, there are more than 100 islands in total that are a part of Hawaii. Most of them aren’t inhabited or are considered islets rather than full blown islands.

That being said, according to my research five of those eight main islands are where you’ll find the hotels in Hawaii with Peloton bikes. I’ve broken my list out by island, below. The list is in alphabetical order.

So, the list of Hawaiian islands with Peloton hotels are:

Finally, I have checked each and every one of these Hawaii hotels to confirm if there are Pelotons there or not. So, you may visit another site and see Hawaii hotels listed but not see them here. All I can say is I feel confident that my information is the most up to date and accurate that you will find when looking for Hawaii hotels with a Peloton.

Hotels on Island of Hawaii (aka the Big Island) with Pelotons

A friend recently confirmed that the Four Seasons Resort Hualalai is practically overflowing with Peloton bikes. There are at least three in the fitness center. Plus, some of the guest rooms have them, too.

Multiple TripAdvisor reviews for the resort property actually thank them for having those three Peloton bikes in the gym. When was the last time you thanked a hotel? I’ve never been to Hawaii but these reviews make me want to stay here.

You can expect to find Peloton cycles (plural) at the Mauna Kea Beach Hotel.

If you’re looking to ride Peloton bikes while staying at the Mauna Lani Hawaii resort, look for them outside the fitness center. That is, outdoors.

Yes, the Peloton bikes at this hotel are outdoors. I’m assuming they’re underneath some kind of covering to protect them from rain, right?

The Westin Workout room, aka the hotel gym, at the The Westin Hapuna Beach Resort has two Peloton cycles.

I couldn’t find information about Peloton bikes anywhere on the Grand Hyatt Kauai website. However, I did find this Travel Age West article–a trade publication for the travel industry–that says the hotel got Pelotons back in 2019. Then, someone I’m in a Facebook group with confirmed there are four Peloton cycles at the Grant Hyatt Kauai.

UPDATE: The PR person for the Four Seasons Resort Lanai reached out to me. Here’s the deal with Peloton bikes at this hotel.

“Four Seasons Resort Lanai, our beach resort, we have 3 Pelotons in our fitness center and 2 bikes in private fitness rooms  for a total of 5.”

How about those private fitness rooms. Here’s what you need to know if you want to rent them.

One, you can rent them for 60-minutes at a time. Two, you’ll pay $50 for the rental. However, it does ensure that you get to exercise all by yourself on your Peloton–great if you like to sing along while sweating it out.

Here is the hotel description of the private fitness rooms you can rent:

The Sensei Lanai is the second Four Seasons Resort on Lanai. It has five bikes in the fitness pavilion aka the hotel gym.

Below, you’ll see a picture of the three of the bikes in the fitness center pavilion. 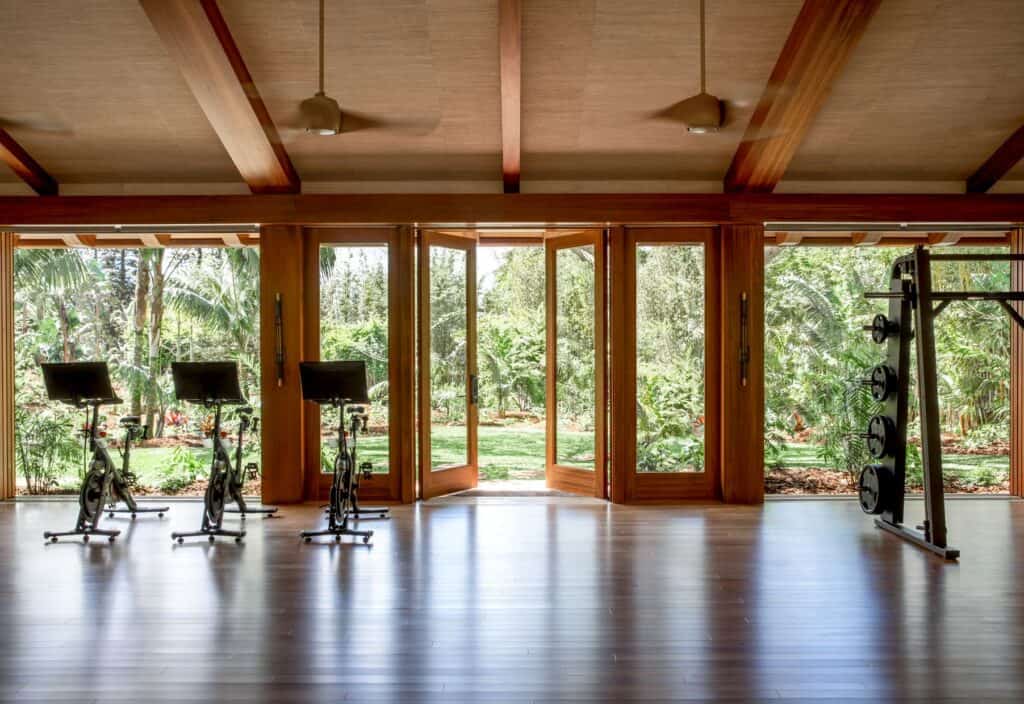 The AC Hotel by Marriott Maui Wailea first opened its doors in 2021. There is one Peloton bike in the hotel gym, overlooking a courtyard garden.

At the Andaz Maui at Wailea Resort, you’ll find information about the Peloton bikes in the fitness center listed with the spa info. It took some digging for me to even find that to confirm that this is, in fact, a Maui hotel with a Peloton. There are two bikes here.

In 2019 the Fairmont Kea Lani, Maui completely redid its fitness center, adding Peloton bikes to the mix. See Facebook post, below. Someone I know stayed there recently and confirmed there are multiple cycles in the hotel gym, including one with Delta Look pedals.

This Travel Weekly article about the Grand Wailea Maui ‘s reopening mentions that the hotel has created “gym pods” or private workout spaces. That’s where the Peloton cycles are likely to be found now in the Grand Wailea gym.

Hyatt Hotels took over the Hana Maui Resort Hotel in 2021. In fact, its new official name is the Hana-Maui Resort, a Destination by Hyatt Residence.

Part of the improvements? Adding two Peloton bikes to the hotel gym and fitness center.

There are two outstanding benefits to staying at Hotel Wailea on Maui, a Relais and Chateaux property. One, it has a Peloton bike. Of course, it does, or I wouldn’t have included it in this post.

And, two, it’s an adult-only resorts. So, if you are looking to get away from your kiddos (and other peoples’, too), this is the place for you.

I saw the Hyatt Regency Maui Resort and Spa tag Peloton in a Facebook post about workout options at the hotel. However, it wasn’t in a picture of the Peloton bike. So, I can’t tell you how many cycles they have here or where exactly they are–in the hotel gym or in rooms, or both.

Then, a friend told me that she celebrated her Century Ride at the Hyatt Regency Maui gym. She said she had three Peloton cycles to choose from. Good to know!

She said two of the bikes have toe cages instead of clips for cleats. However, the third is set up for the Delta Look cleats–the ones we use on our home bikes. So good to know if you get a chance to stay at and try out the Fairmont Kea Lani fitness center.

A Facebook friend shared a picture of herself working out on a Peloton bike outside at this Four Seasons Resort at Wailea on Maui. That sounds about right.

Here is how the hotel explains how guests can use a Peloton while staying on property, because there are two options:

“Available in our open-air cardio area and oceanfront suites, our Peloton bikes are complimentary for guests. Pelotons are also available for private rental, delivered to your room (upon availability).”

Finally, my friend confirmed that that the Pelotons there have shoes cages. So leave the Delta Look cycling shoes at home. 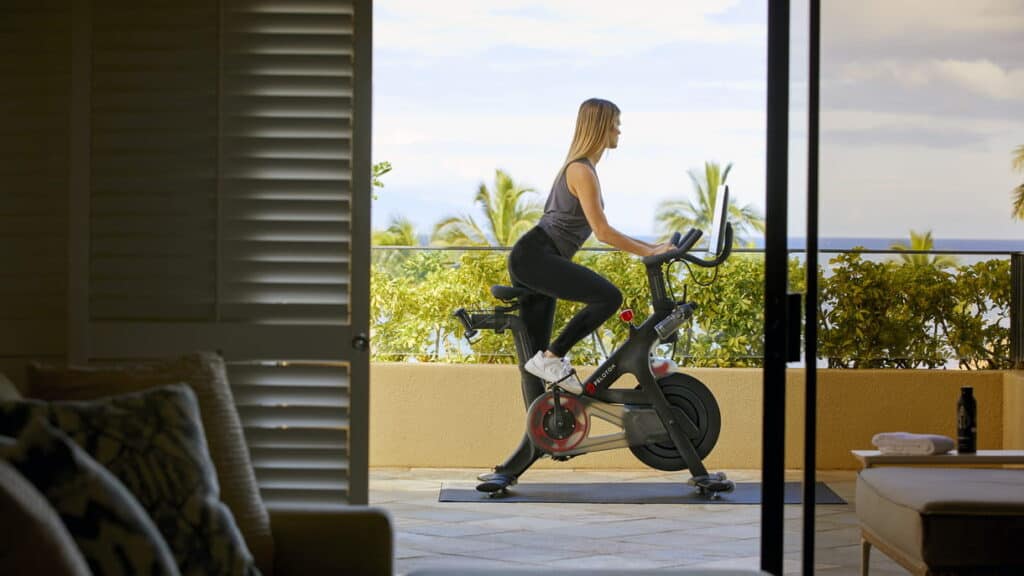 Marriott’s Maui Ocean Club – Molokai, Maui & Lanai Towers refers to the Peloton bikes on property in the plural. Then, I saw a friend’s post on Facebook. She shared a picture of the four Pelotons here.

You can have a Peloton bike delivered to your room at the Spa Montage Kapalua Bay. However, it will cost you $100 a day for this convenience.

A Facebook friend shared a picture of herself working out in the Ritz-Carlton, Kapalua gym on a Peloton bike. She also mentioned that the gym has a Tonal.

I’m told that there is one Peloton bike in the hotel gym at the Wailea Beach Resort.

The website for the Westin Ka’anapali Ocean Resort Villas in Lahaina lists four, count ’em, 4 Peloton bikes for guests to use. However, caveat emptor, says this TripAdvisor review: the bikes may not be in the best shape, this reviewer says.

There are two Peloton bikes at The Westin Nanea Ocean Villas, Ka’anapali.

There are multiple Peloton bikes at the Four Seasons Resort Oahu at Ko Olina–possibly as many as four. If you’ve stayed here and can confirm, do let me know.

First, the Kahala Hotel and Resort website is super difficult to navigate. It’s why I haven’t linked to it here but instead am using its Expedia Page.

However, I mention this navigation issue because it was nearly impossible for me to find information about Peloton bikes here. But eventually I did.

There are two Pelotons here. You should not have to work so hard to find this out. Hey, Kahala, get a better, more user-friendly website theme.

Thanks to a Facebook friend for posting about her trip to the Marriott Ko Olina Beach Club on Oahu. She wanted to let her fellow Peloton users know that this property as a Peloton bike in the vacation rental’s fitness center.

Thanks to a Facebook post complaining about the two Peloton bikes at the Moana Surfrider, A Westin Resort & Spa, Waikiki Beach, I can confirm the presence of the bikes here. Oh, and the complaint? Turns out the bikes weren’t connecting to this Honolulu hotel’s WiFi so the guest couldn’t get them to work. However, once that issue was solved, the two cycles worked perfectly.

You’ll find two Peloton bikes in the gym at Turtle Bay Resort. In case you didn’t know, Turtle Bay is on the North Shore of Oahu.

Here’s something else you need to know about the Turtle Bay gym and fitness center: right now you have make a reservation with the spa concierge to book a workout time. In addition, you’re limited to one hour only in the Turtle Bay gym. 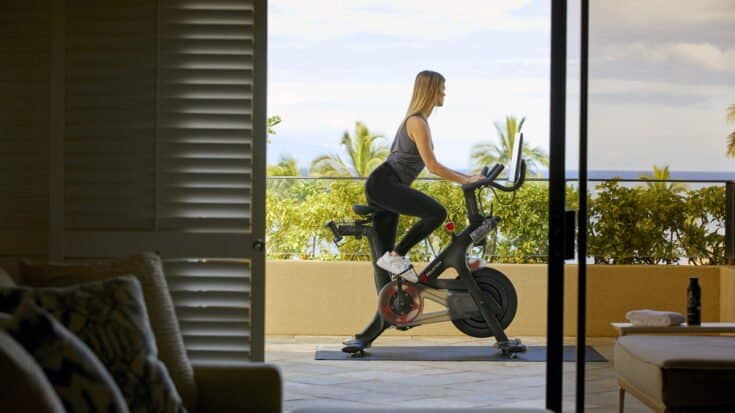 Four Seasons Resort Maui offers the option to have a Peloton bike in your hotel room.

Experience a village vacation at the Westin Ka'anapali Ocean Resort

Like so many of the Peloton hotels articles I’ve written, this one on Hawaii hotels with Peloton bikes, grew out of a larger–and frankly, too long–post about Peloton hotels worldwide. So, consider this newest post a work in progress.

As I come across more hotels in Hawaii with Pelotons, I’ll add them. On the other hand, if you happen to stay at a Hawaii hotel or represent one with Peloton cycles, and I don’t have it in this article, do reach out and let me know. If it’s a good fit, I’ll add it in.

Finally, in my post about vacation rentals with Pelotons, I say that I couldn’t find any in Hawaii. That is, no private homes or condos with a Peloton that you could rent for vacation. So, if you have info on that, too, please post a comment.