There are a couple of reasons I decided to write this New England Peloton hotel guide. One, I know that Peloton users are looking for a list of New England hotels with Pelotons. This is true year round. People want to vacation in the Northeast during ski season, summers off and shoulder seasons, too–especially leaf peeping.

Two, I’ve already written a guide to Massachusetts Peloton hotels. That’s because Boston is the one New England location with the largest concentration of hotels with Peloton bikes. But it’s not the only location.

Finally, there weren’t enough Peloton hotels in each of these New England states to warrant their own articles. Therefore, I’ve combined them all in this one guide to hotels with Pelotons.

Below you’ll find my New England Peloton hotel guide. It includes all of the New England states:

The one caveat is Massachusetts. As I mentioned earlier, I recently published a stand-alone article on Peloton hotels you can find in Massachusetts–especially the Boston area. Now onto the guide.

The Fairfield Inn and Suites Springfield Enfield hotel sits practically on the border of Connecticut and Massachusetts. We used to stay here when my kids were little. It was the midway point between our Pennsylvania home and my mother’s home in Maine. Also, it has a great indoor pool.

Anyway, these days it’s also a Peloton hotel. I spotted a single bike in the fitness center, in front of a very Peloton-sounding quote: “Don’t wish for it. Work for it.”

Multiple sources have confirmed that the Delamar Greenwich Harbor Hotel’s fitness center does have a Peloton bike in it. There are two other Delamar properties in Connecticut also with Peloton bikes. They are in Southport and West Hartford, both included, below.

There is one Peloton cycle in the hotel gym at The J House Greenwich.

While the Delamar Southport lists Peloton bikes (plural) among the many complimentary amenities the hotel offers, a review on TripAdvisor, however, seems to indicate that there is one Peloton cycle only.

According to the Courtyard Stamford Downtown hotel website, there is one Peloton bike on site.

Part of the Hilton family of hotels, The Lloyd Hotel has one Peloton bike in the fitness center gym.

The Residence Inn Stamford Marriott says it has one Peloton bike in the hotel gym.

You’ll find one Peloton bike in the gym at The Stamford hotel. In addition, the hotel has two “wellness” floors with the Mirror workout equipment in room.

The Graduate Hotel Storrs is right on the University of Connecticut campus and is said to have a Peloton bike.

Reviews on TripAdvisor describe the gym at The Surfside Hotel as small but well equipped–because there are two Peloton bikes there.

In Litchfield County, Connecticut, the Mayflower Inn and Spa has two Peloton bikes, which you can see on its Expedia page.

The Delamar West Hartford also lists Peloton bikes (plural) among the many complimentary amenities the hotel offers but TripAdvisor reviews say there is only one bike.

A Facebook friend recently shared with me a picture from the Spruce Point Inn fitness center. It has three Peloton bikes, which allowed her whole family to workout together while staying there on vacation.

This resort, literally in the Maine woods, called Hidden Pond, has three Peloton bikes in the fitness studio.

More vacation rental apartment than true hotel, I found one unit on VRBO at The Tides Residences that comes with a Peloton bike. It has two bedrooms and three bathrooms.

For more vacation rentals with Peloton bikes, check out this blog post.

At The Cliff House in the Cape Neddick area of Ogunquit, you can reserve one of the two Peloton bikes, and ride in private away from the hotel gym. That’s what the resort shared on its Facebook page, below. 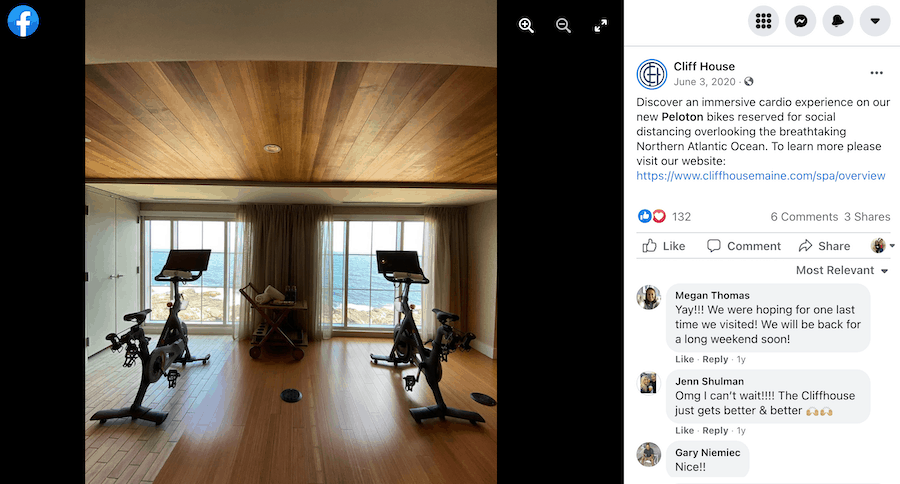 There is a brief mention of a single Peloton bike at the Norseman Resort Aspinquid.

You won’t have a hard time spotting the two Peloton bikes in the hotel gym at the Canopy by Hilton Portland Waterfront. They appear to be front and center for guests to use.

The website for the Courtyard by Marriott Portland Downtown Waterfront is not very helpful in telling potential guests if there are Pelotons there or not. However, the hotel shared photos on TripAdvisor of the two Peloton bikes in the hotel gym. Why not just put it on your website (she shouts into the abyss)?

Multiple people have posted TripAdvisor reviews that The Press Hotel, a Marriott property, has two Peloton bikes. Here is a direct link to the Press Hotel’s website for more information.

You’ll find a full list of Peloton hotels in Massachusetts in this blog post. However, below, is a small sampling of some Boston hotels with Peloton bikes.

I grew up visiting North Conway with my family. That’s because my grandparents lived nearby in Maine. I loved visiting the town and still do. Better yet, I know that I would love to stay at the Eastern Slope Inn Resort. That’s because they recently added two Peloton bikes overlooking the pool. See the Facebook post, below. Plus, the Eastern Slope Inn Resort seems to be the only hotel in New Hampshire with a Peloton. 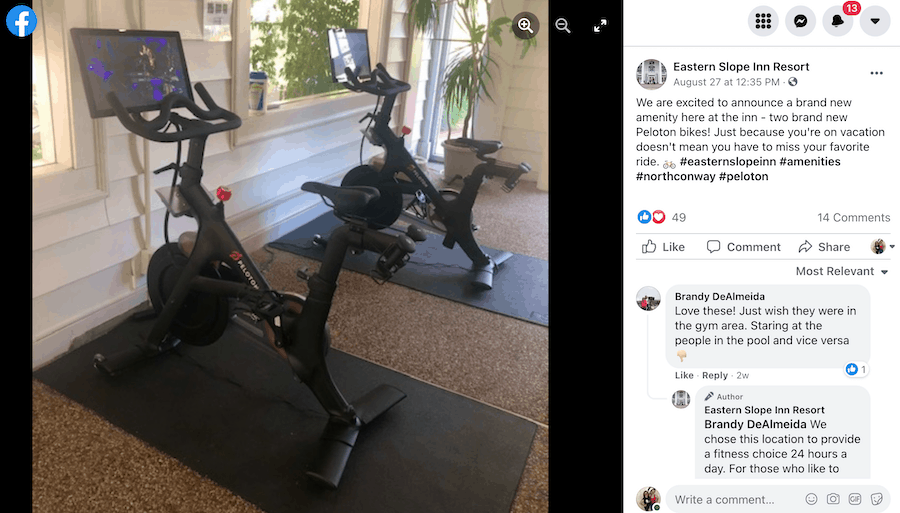 Cranberry Meadown Farm is a bed and breakfast in Southern New Hampshire, located almost equidistant between Keene and Nashua. There is one Peloton bike, next to a traditional spin bike, in the fitness center.

The Break Hotel added a single Peloton bike to its gym in 2018.

The Brenton Hotel is offering one of a few in-room options for a Peloton bike in New England. Here’s how the hotel described how guests could use the two bikes on site:

“Guests will have access to the hotel’s two Peloton bikes which will be delivered to their individual guest rooms for use. Peloton bikes can be reserved by the hour with a two-hour minimum for $50 per hour.”

However, someone I know just stayed here, and the rate was different. It was $25 per hour, with a two-hour minimum, or $50 total. That’s a great price.

The Graduate Providence hotel used to be the Biltmore. However, despite the recent name change, the hotel still has at least one Peloton bike on site.

I like how Twin Farms resort approaches guest use of the Peloton bike in its fitness center. It recommends that you follow up your Peloton ride with a deep tissue massage. Sold!

The Hotel Vermont in Burlington describes its workout facilities as a Peloton bike fitness center.

Call it a ride with a view, shown, below. The two Peloton bikes, with shoe cages on the pedals, in the Killington Grand Resort Hotel overlook a pond as well as the ski runs in the distance.

The Lodge at Spruce Peak

Visitors have reported at least two Peloton bikes at the Lodge at Spruce Peak and also at the Stowe Mountain Resort. In addition, I’m not hearing that you can rent a Peloton to have it delivered to your room.

You’ll find a single Peloton bike tucked in the back of the crowded spin bike room at the Stratton Mountain Resort.

As always I’ve tried to individually confirm that existence of Pelotons in the hotels I’ve included here. However, no one is perfect.

Therefore, if you’ve stayed at, work for or represent a hotel not included in this New England guide, please reach out and let me know. Even better if you’ve got pictures of the Pelotons in room or the hotel gym, I’d love it if I could include them in an updated version of this blog post.

Finally, there are a number of New England vacation rentals with Pelotons, which you can discover in this blog post. This includes private homes and condos in ski country as well as on Cape Cod. 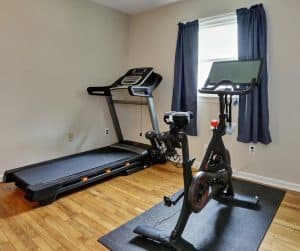 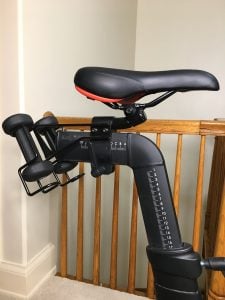 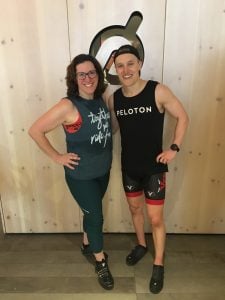