Are you heading to Boston or Cape Code and trying to locate Massachusetts Peloton hotels? That is, hotels and other vacation spots that have Peloton bikes on premises? I can help.

This post on hotels with Pelotons in Massachusetts grew out of my larger article on hotels worldwide with Pelotons. Eventually, that post got too big to manage. Then, readers were complaining (rightly so) about how much scrolling they had to do to get the information they sought. So, I decided to break it up into smaller blog posts about Peloton hotels in each state of the United States, plus worldwide.

You’ll notice that one of the largest contingents of hotels with Pelotons in Massachusetts is in Boston. That’s not surprising since it’s the state’s biggest city. Frankly, it’s one of the first places I heard this thing called a Peloton hotel.

Finally, I’ve also included some Cape Code vacation rentals with Pelotons. These came from my larger post on private homes you can rent that come with a Peloton. They appear, mixed in with hotels, in the alphabetical location list.

The Hotel UMass is right on the University of Massachusetts-Amherst campus. It looks like you can reserve a room with a Peloton bike–like right in your hotel room.

You can find more college towns with Peloton hotels in this blog post.

The Battery Wharf Hotel Boston Waterfront has one Peloton bike.

When it comes to the Boston Harbor Hotel gym, you’ll find a 24-hour fitness center, complete with Peloton bikes.

People I know report there are actually three Peloton cycles at the Boston Marriott Long Wharf and that they have toe cages for Peloton bike. Then, a friend stayed there over the summer and confirmed the three bikes. So, there you go.

However, be forewarned: the bikes’ calibration is a bit wonky. My friend told me she beat her PR by 100 points on one of those bikes.

There is one Peloton bike at The Boxer Hotel.

There seems to be two Peloton options at the Club Quarters Hotel, Boston. One, it seems that all Club Quarters’ hotels have at least one Peloton in the gym, and this includes Boston. Two, Club Quarters says, through its CQ Fit program, they’ll deliver exercise equipment to your room. Why not a Peloton bike?

When I checked the website for the Boston Marriott Long Wharf’s website, I couldn’t find any information about this being a Marriott Peloton hotel. However, based on this TripAdvisor review, it seems that this hotel does, in fact, have a Peloton bike in its gym.

The fitness center at the Encore Boston Harbor, a hotel and casino, includings one Peloton cycle.

The Envoy Hotel Boston, part of the Marriott family, tweeted out about their Peloton bikes when they first arrived. There are three of them in the hotel gym. Now I’ve learned that you can request to have a Peloton in-room, too.

A friend reported that for a not-too-expensive extra fee, the Fairmont Copley Plaza brought one of its Peloton bikes to her hotel guestroom.

I found a press release that described the Peloton situation at the Four Seasons Hotel One Dalton Street in Boston:

“For guests wishing to incorporate fitness into their day, we’ve partnered with Peloton to include a Peloton Bike in-suite…Guests staying overnight in the dedicated Executive Suites can also enjoy an in-suite Peloton bike for work-outs on demand.”

If it hadn’t been for these reviews on TripAdvisor, I never would have known that The Godfrey Hotel has a Peloton bike in the gym fitness center.

For more information about other airport hotels with Pelotons, please visit this blog post.

If you want to ride the Peloton bike at the Hyatt Place Boston/Seaport District hotel, you’ll need to book the Specialty Bike Fitness Room King Bed with Kitchenette. You can see a picture of the room, below. It seems to be the only place on property where you’ll find a Peloton. Supposedly, there are at least two Peloton bikes at the InterContinental Boston. This is from a friend who stayed there and used them and from a Pinterest posting from 2020 from the hotel itself.

A friend told me that she used the Pelotons at the Loews Boston Hotel. However, the hotel’s website makes no mention of them. In fact, I had to search TripAdvisor to find the following information:

The Mandarin Oriental, Boston, announced the addition of a Peloton bike to its hotel gym with the Facebook post, below.

A new hotel with newer Peloton bikes, the Moxy Boston Downtown is one of the most affordable hotel options in Boston, Massachusetts.

Omni Boston Hotel at the Seaport

One of the newest hotels in Massachusetts, the Omni Boston Hotel at the Seaport offers Peloton bikes for guests to use.

Two people have confirmed that the Renaissance Boston Waterfront Hotel, part of the Marriott family, is a Massachusetts Peloton hotel. 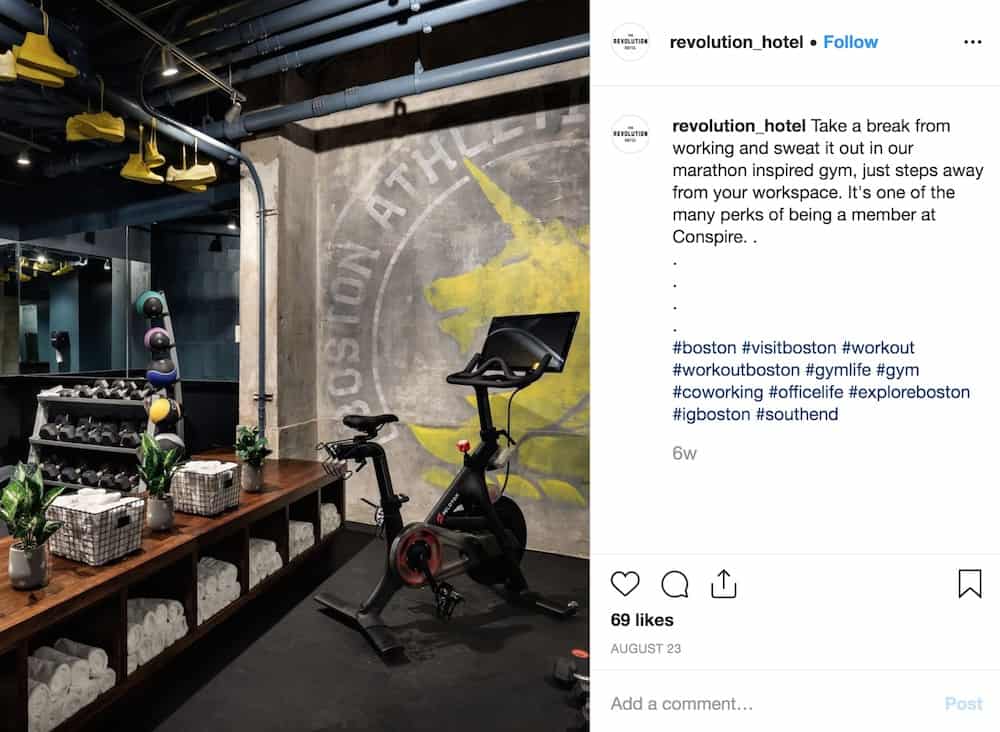 If you’re staying at the W Boston hotel, then you’ll definitely want to check out the W Boston gym. That’s because you’ll find two Peloton bikes there.

Only one Peloton bike at the Westin Copley Place hotel in Boston.

The Westin Waterfront Boston hotel lists that it has eight Peloton bikes in its fitness center. This is how the cycle situation breaksdown at the Westin, as confirmed by a friend who was just there.

I’m not sure how many guestrooms have them–or whether they take the bikes from the fitness center, therefore lowering the number here. But, overall, there are plenty of bikes to choose from at the Westin Boston Seaport District.

The XV Beacon Hotel in Boston, aka the Fifteen Hotel (XV is Roman numbers for 15), has a Peloton bike in the gym. This Facebook post, below, helped me learn about it. 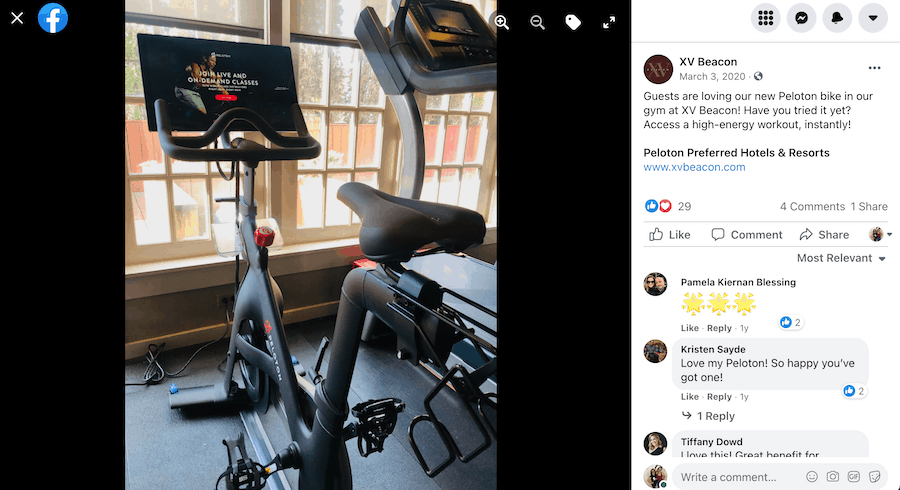 You’ll want to book the King Premium Immersive Spin Bike room at the Hilton Garden Inn Boston Brookline. It’s the premium room at the hotel with the only Peloton cycle.

You can ride one Peloton cycle at the Archer Hotel Burlington. However, keep the following in mind: to sign up to use the fitness center, you need to reserve a time at the front desk. That’s because the hotel is only allowing three people in the gym at once.

You wouldn’t know it from looking at the DoubleTree Suites by Hilton Hotel Boston – Cambridge website, but there are three Peloton bikes in the gym here.

The Hyatt Regency Boston Cambridge recently went through a complete renovation and overhaul. The changes included added Peloton bikes to the hotel gym.

A friend who had business meetings at MIT told me he was able to keep his Peloton streak alive, thanks to the Peloton bike at the Residence Inn Boston Cambridge.

There is one Peloton cycle in the Royal Sonesta Boston hotel, which is actually in Cambridge.

There is one room at the Homewood Suites by Hilton Boston/Canton with a Peloton in room. So, if you want to ride while you stay there, you’ll want to book the “1 king corner studio suite fitness with spin bike.”

In the VRBO listing pictures for this Chatham home, I saw both Peloton-brand cycling shoes as well as sneakers in front of the Peloton bike. So, I’m guessing if you booked this as your vacation rental, you could bring your regular spin shoes from home.

This two-bedroom, two-bath home on Cape Cod overlooks Kelley’s Bay and is conveniently located near Route 6. It can sleep six. The VRBO listing mentions that the home recently added a Peloton bike.

A person in one of my Peloton-related Facebook groups shared that her home in Lenox, in the Berkshires, has a Peloton for guests to use. However, riders have to have their own accounts to log in.

The home has four bedrooms and three baths, and is one two acres. It’s close to Tanglewood (great for summer stays) and nearby ski mountains (great for winter stays).

Note: While the Peloton is mentioned, there are no pictures of it in the VRBO listing.

The Wheatleigh Hotel concierges refer to the Peloton bike on property as an “upright cycling machine.”

This Fairfield Inn and Suites in Mansfield is brand new, as of Summer 2021. It has a Peloton bike in the hotel gym. Given the newness of the property overall, the cycle should be in excellent shape.

You’ll find the Peloton bike in the home office of this Oak Bluffs home on Martha’s Vineyard. That home office includes a sit-to-stand desk, great for work from home. According to the VRBO listing, this is a four-bedroom, two-bath cottage on the bluffs overlooking the beach.

In addition to the Peloton bike in the basement family room of this home, there is a traditional spin bike, hand weights and yoga mats. According to VRBO, this home on Nantucket has five bedrooms and 4.5 baths.

I discovered this statement when searching Agoda.com for the Mirbeau Inn & Spa in Plymouth:

At Mirbeau Inn & Spa at The Pinehills you will find a fitness center with Peloton bikes.

The Fairfield Inn & Suites Somerset says it has Peloton bikes in the hotel gym. However, the hotel is so new, there aren’t any pictures yet on the hotel website of the fitness center and what’s in it.

This is a boutique hotel on Cape Cod. And in 2021 the Endless Coast added a Peloton bike to its fitness center.

There is one Peloton cycle in the hotel gym at the Homewood Suites by Hilton Boston/Woburn.

Hopefully, you found the information you were seeking on hotels with Pelotons in Massachusetts. If I’ve missed any place you’ve stayed or maybe you represent a hotel not listed, please reach out.

Finally, if you have a private home with a Peloton that you rent as a vacation property and you are on VRBO (it’s the property I have a relationship with), please share that link, too. That way I can add it to a future version of this post.